ROCKVILLE, Md. (DTN) -- There are no easy answers for farmers eying sky-high fertilizer prices and supply shortages this fall and wondering what to do -- but there are good questions.

What are your current phosphorus (P) and potassium (K) levels? How low can you drop nitrogen (N) rates in your region without dinging yield? Can you swing partial N applications this fall, and come back with more in the spring? And if you go all in on fall anhydrous ammonia applications right now, are you sure the N will still be there in the spring?

Answering these questions about your field and operation, with the help of soil tests, can help producers narrow down their best course of action, said Emerson Nafziger, a University of Illinois crop production professor emeritus, who led a webinar on Oct. 26 on this topic, sponsored by the Illinois Fertilizer and Chemical Association (IFCA).

WHAT ARE MY SOIL'S P AND K LEVELS?

Depending on your region, it can be possible to go a full year without adding P and K to soils, Nafziger noted. The practice forces your planted crop to dip into the soil's bank of nutrients, and it only works if you have sufficient P and K levels now. Keep in mind you will have to replenish your soil's account in the future.

For Illinois growers, if soil tests show levels are at least 25 to 30 parts per million (ppm) of P and 150 to 175 ppm of K in medium-to-heavy textured soils, skipping P and K applications for your 2022 crop carries very little risk of yield loss, Nafziger said.

As long as your soil bank of P and K sits at adequate levels, don't be alarmed if you see K deficiency symptoms, particularly in soybeans, first thing in the spring, Nafziger added. "Roots just have to grow enough to get to the P and K," he said. Dry soils, no-till, compaction and other root-restricting issues can cause deficiency symptoms, but rainfall usually eliminates the problem, he said.

"The main issue is that P and K removed by crops will need to be replaced eventually -- maybe not fully if soil test levels are high -- and future supplies and prices are uncertain," Nafziger cautioned.

Based on recent survey data, corn removes 0.37 lb of P2O5 and 0.24 lb of K2O per bushel of harvested grain, and soybeans remove 0.75 lb of P2O5 and and 1.17 lb of K2O per bushel, Nafziger said. "We can use these to calculate how many pounds of P and K were removed with crops harvested since these nutrients were last applied," he told DTN. "These amounts will need to be replenished in order to keep soil levels from continuing to drop."

HOW LOW CAN I GO WITH N?

The question of cutting N rates hinges on a concept that researchers call Maximum Return to Nitrogen or MRTN -- essentially, the point when applied nitrogen stops adding enough yield to pay for itself.

Because the soil provides nitrogen to the crop, the MRTN is often less than many growers expect, Nafziger noted.

But the amount of nitrogen in soils that is mineralized and available for crop uptake depends on the year's soil and weather conditions and is hard to predict, he added. Through studies of corn crops grown without added N, Nafziger has seen a 200-bushel corn crop get anywhere from 5% to 90% of its nitrogen from the soil. "On average, about half of the crop's N comes from the soil and half from fertilizer," he said.

So, growing a 220-bushel corn crop does not require adding exactly 220 pounds of nitrogen.

Instead, in Illinois, the average MRTN tends to fall around 180 lbs of N, with some high-yielding research fields sometimes dropping below 150 lbs in good growing conditions, Nafziger noted. Unsurprisingly, in years with wet months of May and June, a field's need for fertilizer increases.

Knowing your field's own MRTN is trickier, but a calculator for it has been developed, based on research from the north-central states of Illinois, Indiana, Iowa, Michigan, Minnesota, Ohio and Wisconsin. (See it here: http://cnrc.agron.iastate.edu/…)

WOULD PARTIAL N RATES WORK FOR ME THIS FALL?

Could you apply only part of your normal fall N load this year? While doing so could hedge against the possibility of even higher prices in the spring, there are clear costs to this idea, Nafziger noted.

It comes with added equipment and application requirements of a second spring pass. It also locks you into a spring crop -- most likely corn -- at a time when many farmers' personal balance sheets for each commodity are still in flux. And you still run into the uncertainty of spring N supplies and prices.

But given the current limited N supplies, it might be a reasonable option if done properly, Nafziger said. "We don't think most farmers want to put their full rate of N on in the fall anyway, but if you're normally putting 150 lbs on in the fall, and this year you only put on 100 lbs, that might be reasonable," he said.

Another advantage is that in the following spring, farmers can often apply less nitrogen than their fall application routine calls for, simply because the fertilizer is more likely to stay put and be taken up by the crop.

Past trials run by the University of Illinois comparing fall and spring nitrogen rates have found that the optimum nitrogen rate for fall-only programs was 17 lbs higher than spring-only programs. The difference was likely due to tile drainage losses, Nafziger said.

WILL YOUR FALL N STILL BE THERE IN THE SPRING?

With some growers being quoted up to $1,200 a ton for anhydrous ammonia (NH3) applications this fall, there has never been a better time to minimize losses, Nafziger noted.

Remember that even at the recommended 50-degree soil temperature for NH3 applications, nitrification can and does occur. In fact, research has shown that the nitrification rate is at 20% of its maximum at 50 degrees -- so if soils stay there for a long time, a lot of nitrogen can be nitrified and vulnerable to leaving the field.

"The soil temperature needs to get to 50 degrees and be headed DOWN at the time of application to keep most of the nitrogen in ammonium form through early spring," Nafziger said. N inhibitors can help, but they also break down in warmer weather, he added. And for farmers facing soggy fields from a weekend of heavy rain, he added: "You will need to wait for drier conditions in most fields -- mudding in NH3 in the fall is not advised."

See more on the rush to apply anhydrous ammonia and the risks of premature application in this recent DTN article here: https://www.dtnpf.com/…. 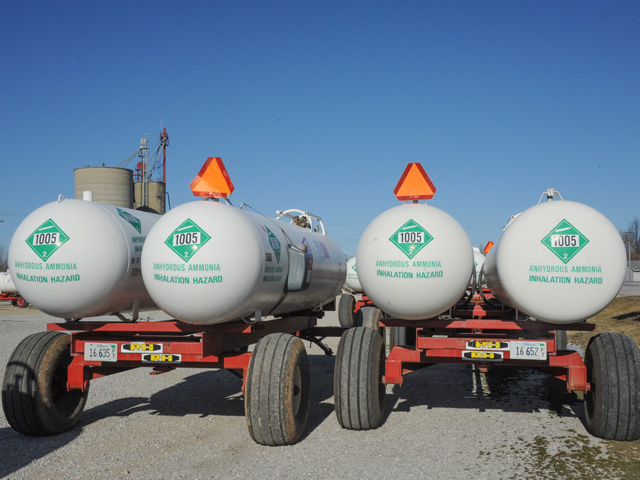