ANKENY, Iowa (DTN) -- Fear regarding rising prices and limited supplies of nitrogen, along with a fast harvest, could entice producers to apply more anhydrous ammonia this fall than usual and before the soil is fit.

Some anhydrous ammonia application has begun in fields where soil temperatures are still above 50 degrees Fahrenheit. That makes the popular corn nitrogen (N) fertilizer more vulnerable to leaching, which can reduce availability for next year's corn crop and pollute water sources.

Nutrient specialists and agronomists understand why producers may want to buy and inject anhydrous ammonia as soon as possible, but they urge farmers to hold off applications until conditions are right or until spring.

"Please try to wait until soil temperatures are consistently below 50 and dropping and use a nitrification inhibitor," said Lowell Gentry, a University of Illinois agronomist and nitrogen and drainage tile researcher. "There might not be a big yield impact (not following either practice), but there can be a significant impact on water quality."

Gentry called this fall the "perfect storm" for early anhydrous ammonia application -- and more of it. Here's why.

-- Anhydrous price has nearly doubled to tripled within the past year, according to DTN fertilizer price data and farmers.

-- Fertilizer availability is a concern. Iowa farmer Kellie Blair, one of two farmers participating in this year's DTN's View From the Cab series, said anhydrous will be applied this fall on her family's farm when temperatures allow, even though that's not the normal practice.

"... The environmentalist in me prefers spring applications followed by as-needed sidedressing. We are not sure nitrogen supplies will be there when we need them if we wait until spring," she said. Read the story at www.dtnpf.com/agriculture/web/ag/news/farm-life/article/2021/10/20/thinking-ahead-inputs-rolling-along.

-- U.S. soybean and corn harvest are 73% and 57% complete, respectively, according to the latest USDA Crop Progress report. As of Sunday, Oct. 17, the average pace for soybeans was 55% complete, while corn is usually 41% done.

Gentry said the right soil conditions are essential to mitigate nitrogen losses when applying in the fall. The fertilizer binds to soil particles as ammonium (NH4+) and is fairly stable, resisting leaching and denitrification when soil temperatures are below 50 degrees Fahrenheit. Warmer soil temperatures favor nitrification, a bacteria-driven process wherein ammonium converts to nitrites (NO2-) and then nitrates (NO3-), which are highly mobile in the soil and vulnerable to leaching.

Nitrates are a major source of water pollution, causing farm fertilization practices to be regulated in some states. Gentry said it's in the best interest of farmers and the environment to do everything they can to mitigate nitrate losses. He said not doing so "could lead to more regulation in the future."

Some agronomists recommend farmers apply all their N in the spring and during the growing season to increase fertilizer efficiency, profit potential and reduce chances of N loss. Check out a DTN/Progressive Farmer story on the topic here: www.dtnpf.com/agriculture/web/ag/news/article/2019/09/10/spring-season-corn-nitrogen-show.

Craig Griffieon, who farms near Ankeny, Iowa, is a fall-to-spring N convert. He doesn't plan to revert to fall application despite rising prices and availability concerns.

Griffieon said his fertilizer supplier recently quoted a price of $1,200 per ton for anhydrous ammonia, up from $450 in spring 2020. The retailer informed Griffieon that if he booked and took ownership of anhydrous this fall, he could likely get it. However, the retailer said if he booked N this fall, he had to use it. After this fall, there's no guarantee on price or supply, he was told.

"We won't put our anhydrous on until the spring, and the reason is leaching concerns," Griffieon said. "I'm hoping all the supply shortages get worked out by then."

The row-crop and livestock farmer split-applies nitrogen for corn. He plans to inject 120 to 130 pounds per acre of anhydrous prior to planting corn and one-third of the crops' N needs at tassel using UAN32 applied with Y-drops.

Soil temperatures in many areas of Corn Belt states are in the 50s and 60s. DTN, several states, universities and the National Corn Growers Association track soil temperatures. Here are three examples:

Farmers waiting for soil temperatures to drop before applying anhydrous may not have to wait much longer.

DTN Ag Meteorologist Emeritus Bryce Anderson said unseasonably warm fall temperatures so far in the Midwest will disappear, at least for the next 10 days to two weeks. He said a cool upper air pattern is set to move east from the Pacific Northwest, bringing more seasonal temperatures -- highs in the low to mid-50s and lows in the low 30s to upper 20s.

"We will see soil temperatures start to taper off, particularly in southeast Iowa and central Illinois where they are still quite warm," Anderson said.

Gentry wrapped up a five-year anhydrous ammonia application study in 2020, which hasn't been published yet. He monitored nitrogen loss and nitrate discharge from 36 tile drainage lines in central Illinois, split between corn and soybeans.

On average, the study showed fields with 100% fall anhydrous ammonia application lost 32 pounds of N per acre compared to 20 pounds of N loss per acre for 100% spring-applied anhydrous. Yield losses, though, were negligible, Gentry said. However, the 12-pound difference in N loss equates to 38% of the tile nitrate load that enters waterways.

"That's the rub," Gentry said. "There's a significant impact on water quality and almost no impact on yield." 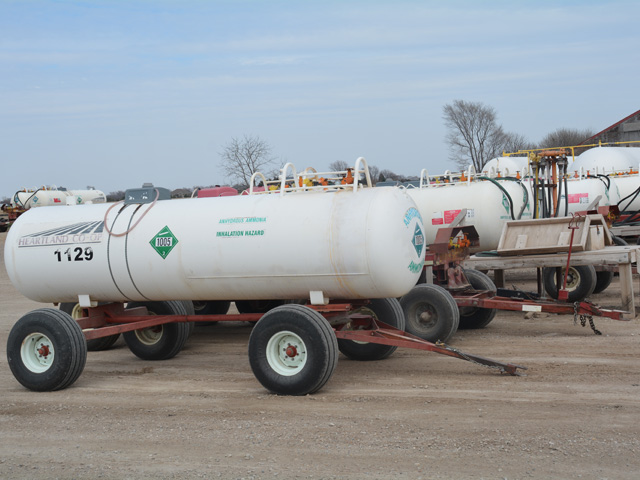