ROCKVILLE, Md. (DTN) -- October holds the promise of cold weather, first frosts and, for many, the blessed end of the march of the fall armyworms, a season-long invasion that plagued farmers, ranchers and homeowners across the country this year.

But don't let that welcome chill comfort you too long. This year's fall armyworm epidemic -- the worst in nearly five decades by some entomologists' estimates -- may be ending, but this level of armyworm infestation could happen more frequently in the years to come, warned Auburn University Extension Entomologist Katelyn Kesheimer.

"We had the perfect storm of events that led to this snowballing effect that let them take over the entire country," Kesheimer said. "But if you look at what those storm components were -- a warm winter, lots of tropical storm systems and potential spray failures -- those are going to become more common moving forward and chances are that they will line up again before the next 50 years. We need to be prepared for that."

Growers would do well to invest in a sweep net, get up to speed on local moth monitoring networks and study the identification and management of this pest for next season, she said.

AN EARLY START FOR AN AGGRESSIVE PEST

The first red flags of the season were the armyworms spotted in the Midsouth as early as May, eating their way through pastures and hay fields. That's unusually early for the insect, which cannot tolerate cold winters. Normally it overwinters in South America or the southernmost regions of Texas and Florida, and adult moths must slowly make their way north each spring, Kesheimer explained.

"We had a warm winter across the South, so more of them survived and got off to an early start, so we started the year with higher numbers," she said. Armyworms are blessed with a rapid generation turnover -- they can lay eggs, hatch, feed, mature, mate and lay eggs again in a matter of weeks. "So, we can have five to seven generations in a single season, if the weather is right," Kesheimer said of Alabama growers.

A hot summer probably didn't help, added DTN Ag Meteorologist John Baranick. Starting in June, much of the U.S, especially the northern and western regions, saw above-average temperatures, with the country clocking its hottest summer on record overall this year.

Like all insects, armyworms are cold-blooded, which means they are more active in warmer weather, Kesheimer noted. "They feed faster, they reproduce faster and their life cycle shortens a little," she said.

Throw in an active tropical storm and hurricane season, and the stage was set for armyworms to wreak havoc across a broad geographic range. "Since adults are migratory, they are flying north, but they also use winds and storms to move around," Kesheimer explained.

The country has seen 20 named storms, with seven hurricanes this season, above the yearly average, Baranick noted. "This year, we saw a bunch of tropical storms form early on," he added. One storm developed in May, with four making landfall throughout June. "Two -- Claudette and Elsa -- had long tracks through the U.S.," Baranick noted.

Things quieted in July, but August brought five storms to U.S. shores -- just as armyworms were reaching epidemic levels in the South. "That helped them expand their range and move farther and farther," Kesheimer said.

Common to this year's armyworm damage were farmers who were stunned by the insect's rapid devastation, which can occur seemingly overnight.

"Growers can look at a field on Friday, and it looks fantastic, and by Sunday, it's completely gone," Kesheimer said.

Part of the problem is that armyworms start off incredibly small, with the initial instars measuring less than one sixteenth of an inch, Kesheimer explained. In the heat of the day, they also huddle near the thatch layer -- where grass meets the ground -- and only venture out to eat the top of plants when it's cooler. That's why entomologists recommend scouting early in the morning or just after dusk, preferably with a sweep net.

"Another good thing to do is go out in the morning when it's still wet and walk through a field, and if you get worms on your boots, think about treating that field," Kesheimer added.

While the caterpillars feed for up to two weeks, they do their worst, most damaging work rapidly in their last few days as caterpillars. "So, if you don't find them when they are still really tiny, by the time you get to them with a sprayer, they've already done the damage," Kesheimer said.

The speed at which the armyworm moves is one reason chemical applications weren't always very effective this year -- many growers were spraying when the caterpillars were too large to control, she said. But other problems contributed to spray failures, such as pyrethroid resistance in one strain of the pest, known as the corn strain. Another was persistent rain showers that washed the insecticide away.

"We're exploring the possibility of resistance in some of these spray failures, but weather was the bigger problem this year," Kesheimer said. "We were consistently getting sporadic rain showers on freshly sprayed fields."

That plentiful moisture also kept pastures and the various plant hosts of the armyworm in good, lush condition, providing plenty of food for multiple generations to thrive on.

And then -- to add to this perfect storm -- spotty shortages of chemicals, including insecticides, plagued many growers this season. "On top of trade issues and supply chain disruptions, there was so much demand," Kesheimer recalled. "People couldn't get insecticides, or they had to get more expensive ones. I even got asked what rate of dish soap would kill them!" (The answer is one tablespoon to a gallon but be careful -- too much can kill your crops, too!)

The bad news is many of these factors are likely here to stay, Kesheimer warned. Climate change means an increased likelihood of warm winters and busy tropical storm seasons. As growers lean on a shrinking toolbox of chemical modes of action, resistance will continue to mount. Even the chemical supply issues are expected to persist for another year or two.

See more on that here: https://www.dtnpf.com/…

"We haven't seen anything like this for decades, but with everything going on, it won't be that long again before we see something like this again," Kesheimer said.

She recommends farmers buy sweep nets and find local moth monitoring systems they can follow each season. You can find guides on identifying fall armyworms from most agricultural universities, including this one from Texas A&M here: https://agrilifeextension.tamu.edu/…

"They have two important characteristics," Kesheimer explained. "The suture or seam on its head makes a very distinct inverted Y. And then on the tail end, there are four black dots that make a square. If you get bigger ones, you can see it."

When in doubt, send photos or samples to local Extension agents or your crop consultants, she advised.

"Look at your operation -- where are you susceptible?" she added. "Line up things you might need before spraying next year -- a supplier, scouting tools, consultants or Extension on speed dial. Have an IPM plan in place."

See DTN's past stories on the armyworm infestations this summer here: https://www.dtnpf.com/… 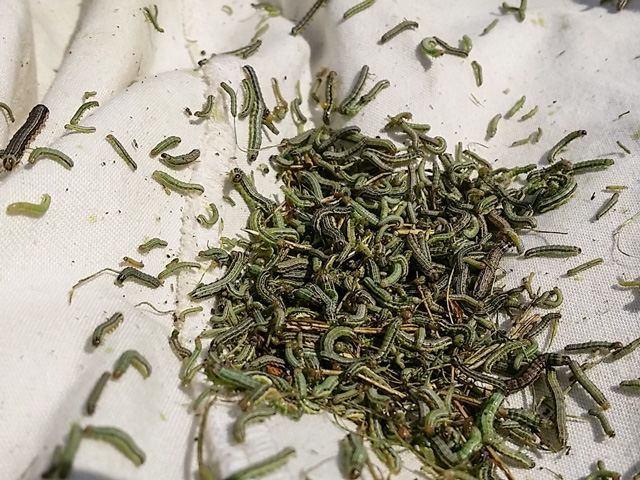