ROCKVILLE, Md. (DTN) -- Ah, the promise of September, as combines start rolling and farmers get their first glimpse of the season's scoreboard.

It can be a heady time, as Ashley Andersen explained. "For once, harvest has a positive buzz around it," she said of her family's farming operation in eastern Nebraska. "Prices are still hanging in there and our yields are pretty darn good. For a month or so, it seems we can take a breath and feel good about the past year."

Andersen is among DTN's Farm Advisers, a group of trusted producers who report back each month via email on their farming and ranching operations. This month they were diving into harvest and watching the combine uncover the season's challenges and successes, field by field.

It's not always a pleasant prospect. Yield monitors bounce up and down, reducing all the season's trials -- disease, winds, drought, flooding -- to a cold, hard set of numbers. Farmers have done all they can, and the results are in, like them or not.

"We are cutting milo in mid-September for the first time in memory here in the Oklahoma Panhandle, simply because it just dried up," said farmer Kenneth Rose. "Test weights are light; yields are half of what we expected a month ago. Many fields won't be harvested due to drought."

But September is also a forward-looking time -- a chance to see what worked and what didn't, and plan head, DTN Farm Advisers noted.

"Sounds gloomy I know, but there is always hope for next year," as Rose put it. "That is what keeps us going."

Most growers from Illinois, Nebraska, Michigan and Ohio reported good, even above-average yields. Eastern Nebraska farmer Kenny Reinke ran his irrigation pivots hard this year and weathered some tough weather, but he's optimistic that his corn will do him proud.

"Corn-wise the yield estimates look good to above APH [Actual Production History]," Reinke said. "The only thing hanging over the corn is we had a fair amount of wind events like usual here, which may take a few top end bushels in places."

Likewise, corn yields look good in southeastern Michigan, but the corn plants themselves are telling the tale of a sickly finish to the season. "Yields have been good, but corn is in poor condition," said Raymond Simpkins, who farms in Lenawee County. "Tar spot has taken its toll on standability. I was able to pick it up pretty well, but I think we probably lost 10% on yields on all the corn."

Tar spot was an unwelcome late-season visitor in east-central Illinois, as well, where Reid Thompson is trying to parse out why his otherwise excellent corn crop seemed to die so abruptly in early September. "Lower yields I believe are a result of rapid dry down," he concluded. "Disease and excess saturation didn't help, but the late August-early September heat was the final dagger."

The Haun family in northwest Ohio are also combining through tar-spot-speckled leaves, but they're pleased with the 170-bpa yields they are finding in their 100-day corn, planted to take advantage of early grain contracts.

Sudden death syndrome (SDS) in soybeans was another common complaint among the DTN Farm Advisers, from Nebraska to Ohio. And armyworms continue to persist in many places, after a vengeful season stripping grain and forage fields from the mid-South up to the Dakotas this year. They're still eating pastures and roadsides in Nebraska, Reinke said. "That's also a reason why I'm dragging my feet drilling rye and wheat on the dryland [acres]," he admitted.

In other places, such as north-central Missouri, nitrogen loss from the heavy June rains is becoming visible for farmers like Kyle Samp, who has been surprised to find himself harvesting an average crop that looked more exceptional in August.

See more on Samp and others here: https://www.dtnpf.com/…

And for those in the drought-stricken Northern Plains and Canadian Prairies, harvest is a clear and predictable disappointment. "I finished harvest last week," said Alberta, Canada, farmer John Kowalchuk. "Yields were 50% of normal for most of us and we did receive some hail also. We are very dry going into fall here and need moisture to hopefully get a decent start next spring."

The continued supply chain crisis adds a new level of stress to this harvest season, when a broken combine part can derail progress indefinitely, as farmers run into odd parts shortages and delivery delays.

Labor shortages are also plaguing some farmers, with Illinois's Thompson rejiggering his trucking system this fall to work around the dearth of available workers. "Instead of hiring drivers for our trucks, we are contracting our trucks out," he said. "I also could hardly get anyone to call me back for a grain cart driver. I'm not sure this is a short-term problem."

But for most DTN Farm Advisers, the rapid climb in chemical and fertilizer prices is the most alarming trend that is threatening to scramble fall fertilizing plans, weed control and even crop selection for next year. In Illinois, Thompson could only buy enough UAN to fill two-thirds of his usual storage before prices flew beyond his reach. "We got enough to get through spring -- we might see some softening by then," Thompson said hopefully.

"I am growing more and more concerned about the price of phosphorous, especially the news coming out of China related to restrictions on phosphorus exports," he explained. "Running 2022 corn budgets, we currently cannot market corn at a profit right now, even though our local cash market for December 2022 is $5.56!" The result is almost certainly a move by growers in his region toward cereal grains, Arnusch said. "We had a record year for wheat seed sales, and I know we are not alone," he said.

See where the DTN Farm Advisers were last year at this time here: https://www.dtnpf.com/… 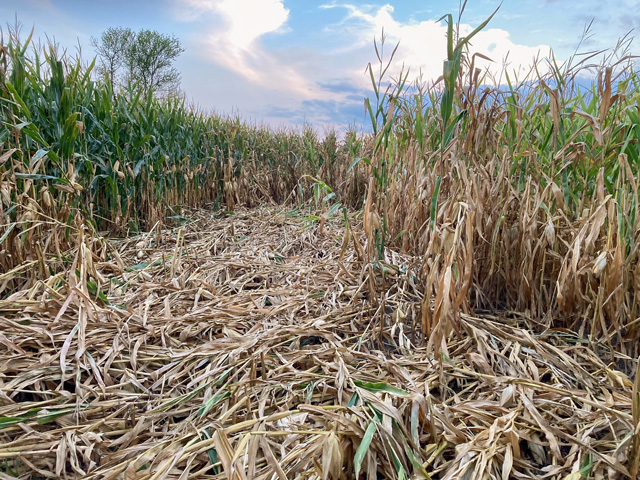