Caleb Hamer has learned a lot about patience being in the seed-growing business.

It was mid-June, and he needed to be spraying herbicides with his father, Ted, and business partner, Scott Beenken, that day near Traer, Iowa. But he had just received the seed to plant the last 97 acres of foundation soybean seed for Bayer Crop Science, and planting took priority.

"You have to be patient and flexible to grow seed," said Hamer as he steered the tractor and planter.

Near Tipton, Indiana, Jordan Stafford was in the combine on July 5 harvesting 100 acres of soft winter wheat for seed for Beck's Superior Hybrids. While many workers had a paid day off because the Fourth of July holiday fell on a Sunday, the wheat needed to come out to preserve seed quality.

"It doesn't seem to make a difference when it's planted, (soft red winter wheat) seems to get ripe around the Fourth of July," Stafford lamented. Still, he has no regrets. "It (growing seed) has worked out well for us. In tight years, the premium can make a big difference."

The DTN/Progressive Farmer is posting a special series called It Starts With Seed, to help farmers start thinking about their seed purchases and preparing for next year. In this, the fifth story of the series, we look at the opportunities available to farmers in growing seed.

Are you patient, detail-oriented and willing to adapt? Do you have good communication skills and work well with others? Are you cooperative and driven to succeed?

It doesn't matter if a farmer is growing corn, soybean, wheat, sorghum or other seed, Ganz said. The qualities seed companies look for in growers are basically the same.

"Flexibility is crucial, and farmers need to be able to adapt to different situations," he explained. "Farmers have to be willing to give up some control. (Seed production) doesn't fit everyone's operation."

Seed needs can change, requiring last-minute planting adjustments. Farmers may be required to do multiple applications of specific crop-protection products at their own expense. Buffer zones for certain seed could be required to maintain varietal purity.

Detailed planning is needed to maintain seed quality in the field and bin for seed that needs to be stored on-farm until delivery, which is at the company's discretion, Ganz continued. Agronomic and crop-input data, as well as records need to be submitted. Routine on-farm inspections occur.

The extra work involved in seed production is worth it, Hamer said. His family has raised seed corn and soybeans for decades. As co-owner of B&H Ag Services, based in Hudson, Iowa, a row-crop and custom farm operation (4,000 acres total), he plans to continue raising seed.

B&H devoted 750 acres -- half of its total soybean acreage -- this year to raising four varieties of soybean seed. Three varieties are foundation seed for Bayer, which will be grown next year by seed producers then distributed to seed dealers in 2023 for sale. The other soybean variety was raised for Corteva Agriscience. Out of 1,500 corn acres, the farm also devoted 380 acres to seed production for Corteva.

Hamer admitted it takes more time in the spring and fall to plant and harvest. The planter, combine, grain cart and bins need to be cleaned when switching seed lines for purity and identity preservation. The extra effort can keep farmers out of the fields for hours, which can be nerve-racking if the weather forecast threatens fieldwork.

At times, bins aren't used effectively, such as being left half-empty, to store identity-preserved soybean seed for future delivery.

"It is all part of what we do," Hamer said. "The premium we get paid offsets the extra work (and expense)."

Stafford Farms raised about 3,000 acres of soft red winter wheat, corn and soybeans this year for Beck's. Jordan Stafford is part of the family-owned grain and livestock operation.

He said planning, precise recordkeeping and attention to detail are critical in seed production.

"As soon as you get complacent, that's when errors occur," Stafford added. "Sometimes you get frustrated or think it's not worth it. But it always works out."

Seed contracts and premiums vary widely between companies and crops, according to growers and industry officials.

Stafford said premiums to raise soft red winter wheat seed for Beck's are about 50 cents per bushel above local cash prices. If the wheat doesn't meet quality standards upon delivery, Stafford said it can be rejected, and he wouldn't get paid. That rarely happens, he added.

Soybean seed premiums can be 70 cents to $1.70 per bushel above the local cash price, depending on what is grown, Hamer explained. Seed that hasn't been commercially registered yet tends to garner a bigger premium because of the additional work and handling involved, he said.

If soybean seed isn't processed because it's not needed, Hamer said farmers may or may not get a premium. It depends on the contract. If seed crops are destroyed by hail, flooding or high winds, such as the derecho that hit some of Hamer's fields last year, he said seed companies aren't required to pay producers for those acres. Growers are encouraged to carry multiperil crop insurance at their own expense to cover potential losses.

Some expenses, such as chemicals and insurance, are often higher for seed crops than commercial crops, Hamer continued. Some input costs, such as seed itself, are usually less. In the end, when premiums are added, he said it's financially beneficial to grow seed.

Compensation for growing seed corn is based on a calculated average of cash prices at local processors and yields, Hamer explained. Since seed corn yields are often drastically lower than commercial corn, yields used for payment are based on an average yield of top-performing commercial corn fields in the area. Seed producers nominate what they believe will be their best-yielding field at harvest, which will be averaged with other top-performing fields. An average of 215 bushels per acre (bpa), or so, is common in Hamer's area. Seed corn is normally raised on a producer's best ground.

When the premium is added, he said his seed corn payment is typically based on corn averaging 250 bpa. Some contracts will increase bushels per acre for good field drainage, fertility and more. Hamer gets a year from harvest to market bushels to hopefully pick times when prices are at the highest.

There isn't a set premium structure for seed corn, unlike other seed crops, he said. Instead, farmers get extra bushels to market.

"To me, that's one of the shining lights of seed production," Hamer added.

GETTING A SEED CONTRACT

If farmers are interested in getting a seed contract, Beck's Daniel Ganz said the best way is to contact seed companies directly. A good place to start is often their seed dealer, who will pass along contact information.

When work activities, such as detasseling and picking seed corn, are ongoing on a farmer's property, seed companies or contractors will carry liability insurance to protect landowners, Ganz said.

Logistics often play a big role in obtaining a contract. Typically, Beck's prefers corn seed growers within 50 miles of a seed-processing facility, which are scattered across the Corn Belt. The company hires contractors to harvest and haul seed corn to plants.

For other crops, Ganz said distance isn't as much of a concern since farmers harvest and haul the seed. If seed growers have additional acres available, Beck's will likely give them the first opportunity to grow more before first-timers are offered a contract.

"We're always open to listen," he continued. "We will talk to farmers about contracts and expectations."

Besides potentially more revenue per acre growing corn seed, there are other perks. Farmers don't have to pay or spend time to harvest, store, dry and haul seed corn since companies do it.

For other seed crops, such as soybeans and wheat, farmers do all the fieldwork, including harvesting. They may also have to store and deliver seed to processing plants.

Editor's Note: This is the fifth of the stories in our special It Starts With Seed series. Next in the series: A look at all the information available on the seed tag that comes with each seed bag or box.

Matthew Wilde can be reached at Matt.Wilde@dtn.com 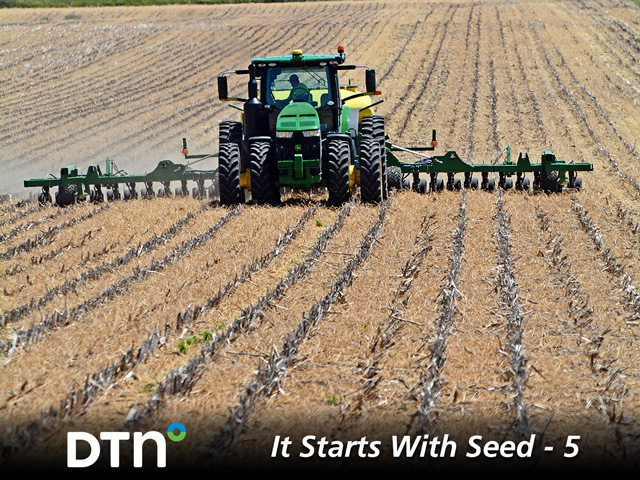