Winds exceeding 100 mph are an extreme test in standability for any experimental corn line, but the fact the variety stood like a tree when thousands of actual trees were blown over during the violent windstorm punched its ticket to further development.

The corn line could help create future hybrids that may withstand high winds without lodging.

In upcoming weeks, DTN/Progressive Farmer is posting a special series called It Starts With Seed, to help farmers start thinking about their seed purchases and preparing for next year. The stories will provide insights and information on a wide range of topics. In this, the first story of the series, we look at plant breeders' efforts to make crops more resilient to weather extremes.

With an ever-changing climate, breeding crops that are more weather resilient is a priority for seed companies. Koch said combining the attributes of racehorse varieties -- known to produce big yields when the weather cooperates -- and a workhorse variety that better withstands adverse weather is more important than ever.

"Weather extremes seem to be getting more intense," Koch explained. "Farmers are going to need a complete or broad defensive package to fit their needs."

"In 40-plus years of farming, I can think of one or two perfect seasons," Yoder said. "You need good risk-management tools, or you can lose the farm. It all starts with the seed."

"They should have died, but by golly they made it," he said. "What it really comes down to is minimizing risk as far as new varieties."

This year is the epitome of extreme weather for Charlie Cook, a senior cotton breeder for Dyna-Gro Seed. The Texan said heat and drought are normally the weather worries for crops in the state. But this year, persistent, heavy rain didn't allow him to plant cotton at two research plots for the first time in his 30-year career.

The "crazy year," Cook said, reinforced the need to breed hardy plants. Despite adequate rain this year, drought is still his No. 1 concern.

"We've lost more cotton to drought in West Texas than will ever be lost to rain," he said.

Cook's approach to breeding cotton to be more weather resilient is not sacrificing seed size for yield. Some cotton is bred to have smaller seeds in bolls, which leaves room for more lint. However, Cook said small seeds don't grow as well in dry, cold or crusted soils. Small seeds have less water and nutrient storage capacity.

"My bigger-seeded varieties will come through (emerge and grow) just about anything. They have tremendous seedling vigor since they have a bigger radical and cotyledon (than small seeds)," Cook said.

Many Dyna-Gro larger-seeded cotton varieties have 180,000 seeds per bag compared to 220,000 seeds in a bag for smaller-seeded varieties, he continued.

Researchers at the University of California-Riverside have identified two genes in recent years that may help crops endure higher temperatures better. Plants, according to researchers, react to shifts of even a few degrees.

Warm weather is a signal to plants that summer is coming. Anticipating less water, they flower early then lack the energy to produce more seeds, which lowers yield.

By modulating the expression or function of the HEMERA or RCB genes through gene editing or breeding in a specific crop, it could improve plant responses to warm weather. Then, targeted breeding can occur.

"To make crops more resilient, we have to uncover the inner workings of how plants sense and respond to temperature and other extreme environmental conditions," Chen said. "We are in the discovery stage. By discovering the new genes that are involved in temperature and sensing, there will be more (companies) working on this."

Climatic data shows a warming trend is underway, especially in the northern latitudes. That is causing an unequal distribution of increased energy, which is likely at the heart of more frequent and extreme weather events, according to Anderson.

"Climate change doesn't necessarily cause individual (weather) events to happen. But, it enhances the potential of storms and events to reach upper-end levels of damage and intensity," Anderson said.

-- Global annual average temperature has increased by about 1.8 degree Fahrenheit from 1901 to 2016. Human activities and greenhouse gas emissions are the dominant cause.

-- The annual average temperature in the contiguous U.S. has increased by 1.2 degree F during the last few decades and by 1.8 degree F relative to the beginning of the last century.

-- Annual precipitation has increased by 4% since 1901 across the U.S. with strong regional differences: increases across the Northeast, Midwest and Great Plains, and decreases in the Southwest.

"Weather extremes will continue to be challenging to get dependable yields. That is the bottom line," Anderson said. "(Crop) breeding efforts can help mitigate yield loss or open the window of tolerance a little longer."

Editor's Note: This is the first of the stories in our special It Starts With Seed series. Next in the series: A look at seed e-commerce as a growing business and whether it will replace retailers and dealers. 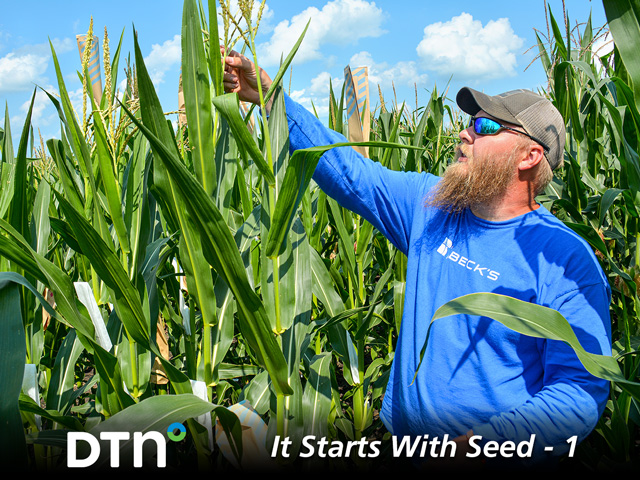