DECATUR, Ill. (DTN) -- If hogs got loose in your crops, a quick roundup would ensue to prevent rooting. It's time to put Palmer amaranth in that same pen.

Around mid-to-late July, pigweed starts appearing above the soybean crop canopy and frames field edges. Palmer is most aggressive of the pigweed escape artists.

"It's important to learn how to identify it from the others," said Aaron Hager, University of Illinois weed specialist. "Waterhemp is definitely a problem child, but it is nothing compared to Palmer when it comes to growth potential and competitive ability."

If you aren't sure what Palmer looks like, it is vital to learn to sort it from the other weedy troublemakers. While important to control early in life, the wily weed becomes easier to identify as it reaches reproductive stage and starts to wave its wild, medusa-looking seed heads. Here are some quick tips for identification from Hager for this time of year:

-- Think Christmas in July (this is worse than a lump of coal though). The arrangement of leaves as you gaze down upon the plant can resemble a poinsettia.

-- Palmer leaves tend to be more rounded, compared to waterhemp which are longer and narrower.

-- The Palmer plant is smooth with no hairs on stems or leaves.

-- Seed and pollen heads can reach 1 to 3 feet in length, which is longer than any other Amaranthus species.

-- Male and female plants differ in appearance. The female seed heads have spiny or prickly bracts on the seed head.

-- The leaf petiole (the part that connects the leaf to the stem) is often longer than the leaf blade. But be careful where you are looking on the plant -- this holds true for the older leaves of Palmer, but not the youngest leaves near the top of the plant.

Some look for the little hair in the notch of the leaf on Palmer, which is called a mucro, and swear that's a clue. Not so fast, Hager warned. "All Palmer plants do not have it. Those plants that do may not have it on every leaf. It is also present on other Amaranthus species in the Midwest. However, if it is present, it is typically more prominent in Palmer and can be seen without a hand lens," he said.

Sometimes Palmer plants have a chevron on the leaf, but that tattoo may not be present on every leaf on the plant. "However, it's rare to see chevrons on other Amaranthus species common in corn and soybean fields," he noted.

Sometimes people mistake spiny amaranth for Palmer because they hear the plant is prickly or sharp. The female Palmer seed heads do have sharp bracts that can give that appearance. However, spiny amaranth is not as tall and has spines or menacing stickers where leaves attach to the stem. And, it's more common to find spiny amaranth in pastures than in corn or soybean fields.

Palmer's footprint continues to expand. Distribution maps place it in nearly every state, except a few areas in the extreme northeast and northwest.

Hager said the time of wondering if Palmer, a desert plant, would thrive in cooler climates is over. "It's happy here and it is still very much a threat," he said.

A recent survey by the Weed Science Society of America (WSSA) pegged Palmer amaranth as the hardest-to-control weed in grass crops.

Some 315 weed scientists across the U.S. and Canada participated in the survey, which was conducted during 2020. Seven categories of grass crops were included, covering weeds found in corn; rice; sorghum; turf; spring cereal grains; winter cereal grains; and pastureland, rangeland and other hay.

In a release about that study, University of Georgia weed scientist Stanley Culpepper pointed to several reasons the weed is so onery.

"Palmer amaranth grows rapidly, has an extensive root structure and produces massive amounts of seeds that are easily transported and spread," said Culpepper. "Even more impressive are its genetic capabilities. Palmer amaranth can quickly evolve resistance to many important herbicides and has the potential to transfer that resistance to new plants through pollen movement."

Culpepper advised growers to have a healthy respect for Palmer amaranth's ability to dominate the landscape. "Removing it before it produces seed is key," he said. "You won't win with herbicides alone. You need timely intervention using a holistic approach."

Simply put, Palmer is a weed you can't afford to let get away. "What you've got is a weed that literally can outgrow most postemergence herbicides in a matter of hours," Hager said.

It's cousin, waterhemp, is a widespread problem and has shown how capable it is of resisting herbicides. "Certainly, you want to kill waterhemp small, but if you get rained out on Monday and can't get back in until Wednesday, you've still got a shot to control it.

"Same thing happens with Palmer and you are potentially done," he said.

Staying in front of it and being able to identify whether you have females capable of making seed is critical to keeping it under control, Hager added. "Find a Midsouth farmer and ask if they would structure their weed control the same way as they did when Palmer first started and I'm guessing none of them would say yes.

"I'm guessing in hindsight they would have made every effort to eliminate those last few surviving females to avoid paying $150 per acre chopping crew on top of a $200 per acre herbicide bill," Hager added.

Discoveries that Palmer and waterhemp can metabolically resist herbicides is changing earlier thoughts about how to fight back, too. "We're learning that we still have a lot to understand about this weed. When you think about the fact that it can resist herbicides it hasn't even been exposed to, why would you want to let it get a foothold," Hager asked.

For a video on how to identify Palmer amaranth in the field, see: https://www.youtube.com/…

A map of Palmer amaranth's distribution can be found here: https://plantoutofplace.com/…

A recent story on glufosinate resistant pigweed can be found here:

Find DTN series "The State of the Pigweed" in different regions of the country go to: 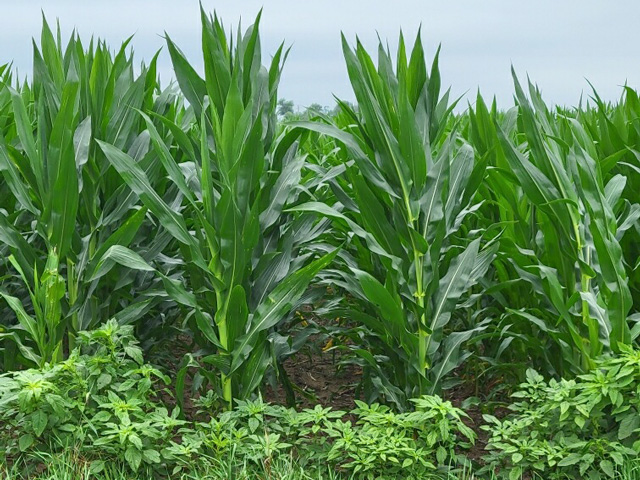