ROCKVILLE, Md. (DTN) -- Palmer amaranth, possibly the most aggressive weed American farmers have ever faced, is quickly becoming a familiar name to most row crop farmers.

For nearly two decades, scientists and farmers have struggled to control it, as herbicide-resistant populations have spread steadily west and north from their start in the deep South. The weed now occupies 39 states stretching coast to coast.

But what does it really mean for a state to have Palmer amaranth? What herbicide-resistant traits has it carried on its journey, and how do farmers manage it in the widely varying landscapes of the U.S.?

In this series, The State of the Pigweed, we checked in with 28 states in the Great Plains, Midwest, South and Mid-Atlantic regions, to see where they stand with this challenging weed. In the first of three stories, we explore the experience of seven states dubbed "the newbies." Here, Palmer amaranth outbreaks have been mostly isolated and contained, but the state's scientists and farmers are braced for the worst.

Iowa, Michigan, Minnesota, North Dakota, Ohio, South Dakota and Wisconsin -- like many a freshman class, these Palmer newbie states are still fresh-faced and optimistic about their ability to control Palmer amaranth.

Between 2011 and 2018, Palmer amaranth has cropped up in each of these states, but infestations have been light, isolated and largely controlled. "So far there's been nothing widespread -- every find has been somewhat contained," Rodrigo Werle, University of Wisconsin Extension weed scientist, said of the state's Palmer finds. "We hope it stays that way."

Palmer amaranth is famed for its spectacular reproductive abilities. A single female plant can produce between 500,000 and 1 million seeds under optimal conditions. Because the weed is dioecious -- male and female plants cross-pollinate -- genetic diversity is high, which means plants can evolve quickly to thwart control methods, such as herbicides.

Palmer amaranth is native to the southwestern U.S. and northern Mexico. Earlier in the weed's slow march northward, some scientists hypothesized that it wouldn't adapt well to the short summers and long, frigid winters of the upper Midwest. Alas, the weed seems perfectly comfortable north of I-80, Werle said.

"The seeds are here and they're doing just fine," he said. "It's quite impressive how aggressive it is."

"Part of what we have going for us is that in nearly every field, waterhemp is the target weed and so everybody has an herbicide program targeting waterhemp," he explained. "Palmer amaranth, which is starting at ground zero, will have a hard time getting established, because usually what works on waterhemp works on Palmer amaranth."

The farmers and scientists in these states have another advantage: A front-row seat to the battles their southern colleagues have waged against Palmer amaranth for nearly two decades now.

They have been quick to devise war plans of their own, some of which involve blowtorches -- literally.

"Each case, we've done the same thing," said Jeff Gunsolus, an Extension weed scientist from the University of Minnesota, which has confirmed Palmer amaranth in six counties since 2016. "Early monitoring and zero tolerance eradication -- the Minnesota Department of Agriculture will send people out to burn plant material."

Many states have also focused on early and aggressive education for their farmers -- sometimes even before the weed arrived. North Dakota launched a campaign to find it and identify any Palmer amaranth plants in the state in 2014 -- four years before the state's first confirmed find in August 2018.

After the weed was found in Ohio in 2012, the state's weed experts swung into action. They distributed educational videos, newsletters and fact sheets around the state. In regions where an infestation had been located, they set up local meetings with farmers and other stakeholders to drum up awareness.

"We had a really aggressive campaign against it, and it has mostly worked," said Ohio State University Extension weed scientist Mark Loux. Even though the weed continues to be introduced into the state via contaminated feed, seed and equipment, it hasn't become endemic yet. "We've had finds in 25 counties -- but usually just a few plants," Loux said. "We track them and try to put them out, and what we're seeing is that it's not spreading yet within the state."

Many of these states have also moved quickly to beef up the legal fight against Palmer amaranth. Minnesota, for example, has listed the plant on the state's Prohibited Noxious Weed Eradicate List -- which means it must be destroyed when found. Minnesota also listed Palmer amaranth as a Prohibited Weed Seed, which bans any seed lots sold in the state from containing any Palmer amaranth seeds. Iowa, Ohio and Wisconsin have made similar use of state noxious weed lists and weed seed laws.

"It just gives the state more legal options in enforcing the effort to reduce the spread through pollinator and CRP seed," Gunsolus said.

But no matter how quickly they move, these seven states are already inheriting the mistakes of their predecessors. The Palmer amaranth species that show up in the northern and eastern Midwest usually arrive via out-of-state manure, migratory waterfowl, farm equipment, cottonseed, hay and contaminated seed lots, often for pollinator plots, CRP fields and birdseed.

That means before the states' farmers ever apply a chemical to them, some of the Palmer amaranth plants that sprout are already resistant to multiple herbicides.

More resistance traits are likely still unknown. Minnesota has only tested weeds from two of the six counties where Palmer amaranth has been found. North Dakota is still in the process of testing seed from its summer scouting.

In the face of this uncertainty, educators are urging farmers to get their hands dirty, said Paul Johnson, South Dakota State University Extension weed science coordinator.

"What chemicals work on it really varies here, because the Palmer amaranth we have has come from so many other states and locations," he said. "We don't know exactly what resistance we have, so people need to go for total eradication -- hand-pulling."

For a map showing the full distribution of Palmer amaranth in the U.S., see this link from University of Wyoming weed scientist Andrew Kniss: https://plantoutofplace.com/…. 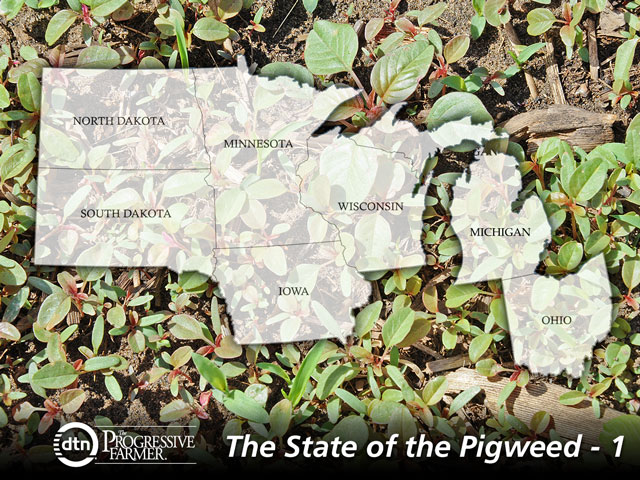