ROCKVILLE, Md. (DTN) -- There are zombies lurking under the canopies of crop fields this summer, particularly soybean fields.

"With auxin herbicides, there's a tendency to lay that weed down, but if they don't completely kill it, in around 14 days, that weed turns and starts coming back up," University of Arkansas weed scientist Jason Norsworthy explained. "And depending on the size of the crop, it might take another 14 days to get above the canopy."

Weed resistance to post-emergence herbicides such as dicamba, 2,4-D and glufosinate (Liberty) is on the rise this summer, weed scientists told DTN. In the Midwest, waterhemp escapes are most often troubling growers, while in the South, Palmer amaranth is shaking off herbicide applications with increasing ease.

Scouting after post-emergence applications, particularly in soybeans, will be more important than ever this year, weed scientists warned. Don't wait for undead weed escapes to lurch up above the canopy, don't let them go to seed in your field, and beware of the growing presence of metabolic resistance, a phenomenon where weeds evolve to metabolize any type of herbicide fast enough to avoid injury.

And remember that with the national cutoff for dicamba use in soybeans, June 30, behind us, and growth stage limitations approaching for other post-emergence herbicides, farmers may have limited options to clean up these troubling weed escapes, University of Tennessee weed scientist Larry Steckel said. See more from him on that topic here: https://news.utcrops.com/…, and from Penn State University here: https://extension.psu.edu/….

RESISTANCE ON THE RISE

In the worst fields Steckel has tested recently, Palmer amaranth populations are requiring eight times (8X) the labeled rate of dicamba to die, with some populations also requiring 4X rates of 2,4-D for control. "They're slipping even more than they did last year," Steckel warned of those auxin herbicides, which are widely used in RR2 Xtend, XtendFlex and Enlist fields. "I've had no trouble finding Palmer escapes in any field I walk into. It's the way Roundup resistance was -- a little worse every year."

University of Arkansas weed scientist Jason Norsworthy said resistance to dicamba and glufosinate are easier to find this year in eastern Arkansas, as well. "We've found some glufosinate-resistance and we've found some dicamba-resistance," he said. "It's starting to get on that slippery slope of how much longer can we keep doing what we're doing and being successful?"

Waterhemp resistance to dicamba or glufosinate hasn't been confirmed yet, but incomplete control of some field populations has been observed across the Midwest, University of Missouri scientists warned in a recent publication: https://ipm.missouri.edu/….

Getting out into the field after post applications is critical this year, weed scientists said.

In particular, weeds that survive applications of auxin herbicides such as dicamba or 2,4-D, will lay down for a while before they start re-growing vertically. Farmers who are only watching for weed escapes poking up over the canopy will miss this dangerous re-growth, as well as their best opportunity to get out and re-spray, Norsworthy and Steckel warned.

"It might give a false sense of security of an effective weed control program because you can't see it from the road," explained Norsworthy. "If you're not out in the fields walking them, you find out in hindsight weeks later that it got away from you."

METABOLIC RESISTANCE IS MOVING IN

Norsworthy and Steckel are both worried that metabolic resistance is playing an increasingly large role in the weed escapes they're seeing. Metabolic resistance occurs when plants survive herbicide applications by rapidly metabolizing the chemicals instead of relying on a specific change in a herbicide's targeted site of action in the plant.

It poses a major threat to chemical weed control because it can create weeds that can metabolize and survive many different herbicides with different modes of action, even ones that a weed has never encountered before.

Steckel has found that adding malathion, an organophosphate insecticide, to dicamba and 2,4-D applications increases control of some resistant weeds by 30% and 10%, respectively. Since malathion is known to interfere with plants' ability to metabolize herbicides, "that's one of the indicators that would suggest we're seeing metabolism-based resistance," he warned.

That's what Kansas State University weed scientists discovered, too, when they confirmed a six-way resistant Palmer amaranth population this past winter. "One of the key findings of this research is that metabolism-based resistance was found for five of the six sites of action," the scientists wrote. See more here: https://webapp.agron.ksu.edu/….

DON'T LET IT GO TO SEED

If growers want to test suspected resistant weed populations, keep in mind this requires letting the weed go to seed and collecting those seeds to grow out and be sprayed at varying rates in stewarded greenhouse tests -- an eight- to nine-month process, Steckel said. (An exception to that is testing for glyphosate or PPO-resistance in pigweed species, which can be done via a molecular test at the University of Illinois's plant clinic. See more here: https://web.extension.illinois.edu/…).

In the meantime, most growers should focus on keeping any and all weed escapes from going to seed in their fields, Norsworthy said.

"One thing is for certain: If it has escaped multiple applications, you're definitely going to have more difficulty controlling that weed next year," he warned. Keep a hoe in the back of your truck or even consider hiring help to chop resistant weeds before they scatter their offspring around your field behind the combine, he said.

Remember, even just a few surviving Palmer amaranth plants can produce a staggering amount of seed. Under average growing conditions and competition, a single female plant may put out 80,000 seeds. "If you look at soybean seeding rates of 120,000 to 140,000 per acre, all you need is two [female] Palmer plants going to seed on one acre, and you've got more pigweed on that acre than soybeans you're going to plant next year," Norsworthy pointed out. 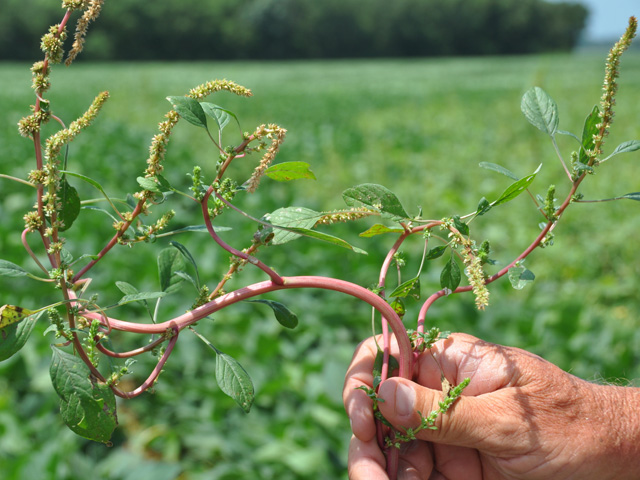