The Michigan State entomologist counted an average of 400 to 500 aphids per plant, well above the 250-per-plant threshold to consider treatment. Time to spray, surely!

Not so fast, DiFonzo cautioned. This week, she revisited the field and found it swarming with a different kind of insect: beneficial insect predators such as ladybugs, lacewing larvae, parasitic wasps and more.

The number of aphids per plant had dropped down close to 40, as hungry insects ate and parasitized the aphids and recent rains washed off the leaves. "The plants were growing great; they weren't stressed at all," DiFonzo told DTN.

She took to her laptop recently, sending out an alert to her Michigan growers. Scout for aphids, she stressed, but give the robust beneficial insect population emerging in many crop fields time to help you out, as well.

"Wait and watch the infestation," she wrote. "Right now, there is a battle going on under the canopy, a battle between the aphids versus their natural enemies."

The economic threshold set by university entomologists stands at 250 aphids per plant. But keep in mind that this is a conservative number designed to give farmers and applicators time to ready an insecticide application. It is borne of a time, more than a decade ago, when aphids were new to soybeans, native insect predators had yet to discover them, and applicators were overwhelmed by spray requests, DiFonzo said.

"That builds in time for one week of development before you could get to a field to spray," she explained. Actual economic damage from soybean aphids only comes when populations rise to around 670 aphids per plant.

"The increase in soybean price doesn't really change that," added DiFonzo. "We just can't detect injury earlier than that, whether beans are $5 or $15 a bushel."

The threshold is also most important for the R1 to R5 reproductive stages of soybeans. Michigan State studies show no impact on yield when growers spray earlier in the season to protect soybeans in vegetative growth stages.

"In fact, spraying too early may INCREASE your aphid problems by wiping out natural enemies, setting you up for another spray, and maybe another, later in the season," DiFonzo warned in her email alert.

Moreover, spraying too often and too early is one of the major causes of insecticide resistance now plaguing growers in Minnesota, where many aphid populations cannot be controlled by pyrethroid applications.

Spraying too early and too often for soybean aphids can also sometimes cause flare-ups in two-spotted spider mite populations, a looming threat to dry parts of the country right now. That's because certain insecticides used for aphids, such as pyrethroids, don't control spider mites, but do take out beneficial insect populations that feed on mites.

At this time of year, early-planted soybean fields are still most at risk for infestations, especially those with more coarsely textured soil and fields that test lower in potassium, University of Minnesota scientists explain in their guide to scouting and treating the pest. Later in the summer, double-cropped or late-planted soybeans will be more at risk.

Be sure to scout beyond field edges, where aphids first cluster after they migrate to the field, DiFonzo said.

Iowa State University scientists are also tracking emerging soybean aphid populations, but they too are discovering that beneficial insects are numerous and hard at work.

BENEFICIAL INSECTS GIVE FARMERS AN ASSIST

The rise of native insect predator populations of soybean aphid is a hopeful success story for farmers, DiFonzo explained. When the pest first arrived in the U.S. in the early 2000s, it faced few native bio-controls and became a huge problem for growers.

Infestations were so problematic that USDA approved and helped fund the release of certain non-native parasitic wasp species in the Midwest in 2002 and 2007, in the hopes of seeding a bio-control population. They mostly failed to establish.

Fortunately, it turns out that farmers' native insect populations, and at least one invasive parasitic wasp species, just needed time to adjust to this new location of aphids -- soybean fields, DiFonzo said. "In the years after soybean aphid was discovered in Michigan, the aphids won the battle," she explained in her alert. "But then natural enemies figured out that aphids are a delicious snack and since 2007, they get the upper hand."

Read more about the rise in beneficial insect predators of soybean aphids from DTN here: https://www.dtnpf.com/… 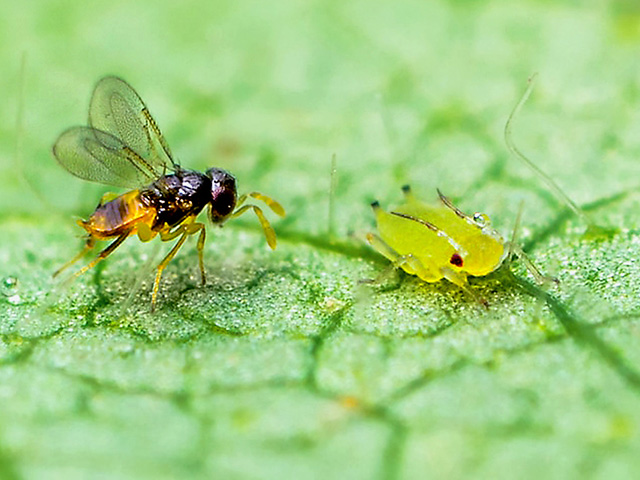