ROCKVILLE, Md. (DTN) -- If you have a hankering for a sci-fi horror flick this summer, skip the theater and head straight to your soybean field.

There, tiny parasitic wasps called Aphelinus certus will likely be flitting through your field, piercing soybean aphids with their stingers and inserting their eggs inside the aphid's body.

When the eggs hatch, the larvae will live off the aphid's innards before they burst out of their host as winged adult wasps.

All that remains of the unfortunate aphid is a swollen, blackened "mummy."

Mercifully, these wasps don't target humans or other animals, or even any insects beyond aphids. They're proving a valuable biological control for soybean aphid, but they do have one weakness -- they're an insect, too.

"Unfortunately, they are in general more sensitive to insecticides than the targeted pest, in this case, soybean aphid," said Robert Koch, an entomologist with the University of Minnesota.

From foliar applications to seed treatments, current insecticide use may be thwarting this valuable biological weapon.

Parasitic wasps have proven so useful at hunting and destroying soybean aphids that USDA has been testing different species over the past decade to see which ones they can safely release as biological controls of this growing soybean pest.

The agency actually tested A. certus and decided it wasn't a picky enough wasp species for their purposes, Koch said. "It's a generalist feeder, which means it will feed on multiple hosts, in this case, a lot of aphid species."

The agency discarded it as a candidate for release. But the wasp had other ideas.

"It somehow made its way here on its own from Asia," Koch explained. "We don't know how it got here."

Scientists first found A. certus in North America in 2005. It quickly spread around the U.S. and landed in Minnesota in 2011, Koch said. The University of Minnesota and the Minnesota Department of Agriculture have been surveying its populations around the state since 2015.

The wasp is doing very well.

"The benefit of not being a picky feeder is that it can utilize different prey around in the environment even if soybean aphids are not abundant," Koch said. "It can keep its population up on grain aphids in wheat, for example, and move around the landscape to maintain higher populations. And if an outbreak of soybean aphids occurs, it can respond to it."

The wasp has already appeared in greater densities in parts of the state that have problematic aphid populations. Scientists in Michigan and Ontario are crediting it with lowering aphid outbreaks there, too, Koch said.

Recently, farmers have reported field failures of pyrethroid applications against aphids in Minnesota, the Dakotas, Iowa and Manitoba, Canada. A. certus could prove an important ally in the fight against these growing populations of insecticide-resistant aphids, Koch said.

There's only one problem. This fierce little parasitic wasp is under attack -- from us.

Overspraying -- the same problem that created pyrethroid-resistant soybean aphids -- could be limiting the full potential of these wasps, Koch noted.

"If people were a bit more judicious with their insecticide use, we could help promote these populations more," he said.

"In my Extension program, we're really trying to stress the importance of waiting until you have 250 aphids per plant to spray, so you can give these good insects -- parasitic wasps and lady beetles -- a chance to do their thing," Koch added. "And if they can't, and the aphid population surpasses 250 per plant, then you can come in with an insecticide."

The wasps may suffer long before growers set foot in a sprayer, however.

A 2014 study by University of Guelph scientists found that insecticide seed treatments can threaten the effectiveness of parasitic wasps. When they fed on aphids on neonicotinoid-treated soybeans, the parasitism rates of A. certus plummeted 68% to 88% compared to untreated beans. 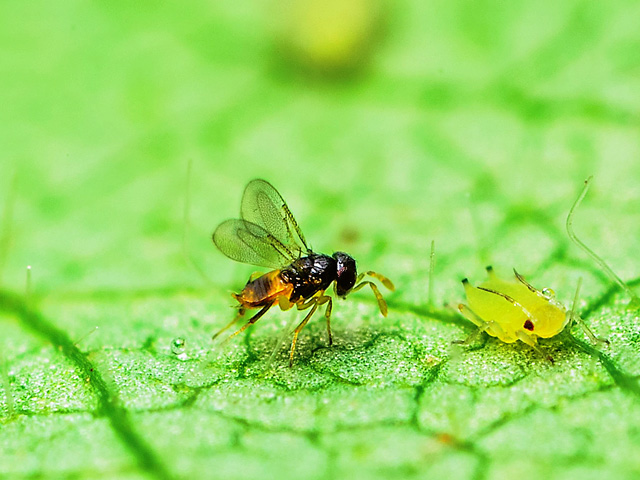