ANKENY, Iowa (DTN) -- Soybeans planted in December on a Wisconsin farm largely failed to emerge this spring, but the experiment to test hardiness of seed did yield valuable information.

Ryan Nell, who farms 2,200 acres with family near Beaver Dam, seeded 3 acres on Dec. 10 just to see how much stress seed could handle when it comes to early planting.

Nell had high hopes the extremely early planted soybeans, or at least some of them, would germinate and grow. Some germination occurred, but almost all did not grow.

"It's not a great ending, let's put it that way," Nell said. "We dug some seed up in March, and they were germinating and trying to grow. But probably 99.9% didn't make it.

"Maybe one or two did, but they are awfully hard to find," he continued. "I really thought the December soybeans would make it. I'll be the first one to admit defeat."

However, Nell is quick to point out just because his first winter planting didn't work out, that doesn't mean he won't try again if conditions allow. With every setback, he said, lessons are learned.

Nell is an advocate of planting soybeans early to boost yields and profit potential. In addition to the December experiment, he planted 5 acres on March 22, 200 acres from April 3-6 and the remainder of his soybean acres from April 21-26. May and sometimes even June soybean planting is common in his area.

Frost over Memorial Day weekend injured Nell's early April-planted soybeans, which were about 5 inches tall, forcing him to replant 75 acres. However, he said the rest of the soybeans -- except for the December plantings -- look very good. Per-acre yield potential in the 80s is possible if conditions allow, he said. The farm average since 2015 is 65 bushels per acre (bpa).

The December experiment showed there's a limit to how long treated seed can be in the ground and the amount of stress seeds can withstand, Nell concluded. Pushing planting much earlier than late March, even in limited amounts in colder climates, may not work.

"This doesn't deter me (from planting early). We are still learning," Nell said.

After talking with family and his agronomist, Nell determined there's several reasons why the December beans didn't grow.

-- The winter was too warm. He expected December-planted seeds to germinate in April, but they began the month before and conditions following germination weren't favorable for growth.

The experiment's goal was to test the cold tolerance and longevity of soybean seed in the ground. While winter planting will never become commonplace in most soybean-growing states, more and more farmers like Nell are planting soybeans early -- in early to mid-April and even late March -- to increase production.

In a Northern U.S. climate, early planted soybeans can increase vegetative biomass and produce a greater number of nodes. More nodes can lead to more flowers, which means more pods and soybeans.

A multistate study led by Shawn Conley of the University of Wisconsin indicates soybean yields decrease 0.2 to 0.5 bushel per acre (bpa) per day when seed is planted after April 25. Soybeans planted in mid-April tend to yield 5 to 10 bpa better than mid- to late-May plantings.

"Generally, I encourage growers to don't plant any earlier than their respective crop insurance date to lessen the chance of frost damage," he said. "Planting too early can be trouble. Deep planting, more than 1.25 inches, can also be a challenge." 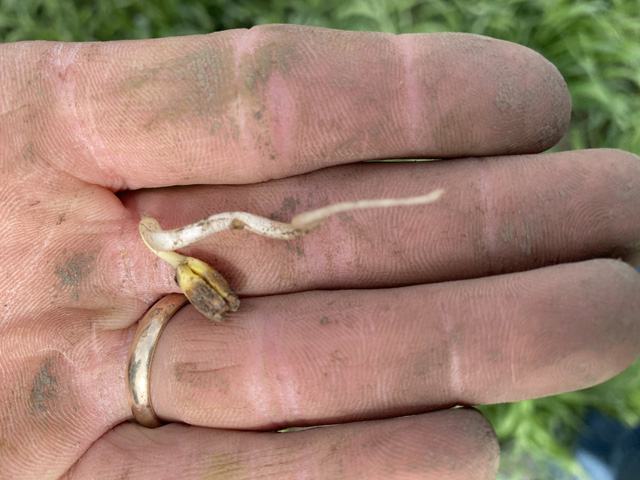