ROCKVILLE, Md. (DTN) -- Bayer and BASF are facing a rash of new lawsuits over alleged injury from their dicamba herbicides, even as Bayer works to settle older dicamba injury claims and both companies appeal a recent jury verdict against them.

Arkansas-based honey producer, Coy's Honey Farm, filed a lawsuit against Bayer in the U.S. District Court for the Eastern District of Arkansas on May 25, claiming dicamba drift destroyed vegetation the farm's bees relied upon, reducing the farm's honey production and bee populations starting in 2018.

A week later, on June 4, a group of wine grape growers in the High Plains of Texas filed a lawsuit in Jefferson County District Court in Texas against both Bayer and BASF, alleging 57 Texas vineyards suffered hundreds of millions of dollars in damage to their grapes from dicamba volatilization and drift starting in 2016.

The new lawsuits come as Bayer and BASF are still fighting to overturn a $265-million jury verdict (since reduced to $75 million) against the companies, for dicamba injury to a peach orchard in Missouri. Both companies have appealed to the U.S. Court of Appeals for the Eighth Circuit, arguing the jury verdict should be reversed.

At the same time, Bayer is still working through a settlement for injury to non-dicamba-tolerant soybean fields. The company agreed to make $400 million available to resolve multi-district litigation in the U.S. District Court for the Eastern District of Missouri over dicamba injury claims to soybean fields from 2015 to 2020. The claims period for that settlement closed last week, on May 28. (See more here: https://www.dtnpf.com/…).

Looming in the background to the companies' legal battles over dicamba are four federal lawsuits against EPA's most recent re-registration of dicamba herbicides, released in October 2020. See more on that here: https://www.dtnpf.com/….

Here are some details on the newest lawsuits.

In its opening complaint, Coy's Honey Farm Vice President Richard Coy estimated that by 2017 the farm owned and operated approximately 13,000 hives across 260 locations in eastern Arkansas.

Coy argues that use of Bayer's dicamba herbicide (as well as BASF's Engenia herbicide and Corteva's FeXapan herbicide), "greatly diminished" the pollen and nectar sources on the landscape "as a result of the drift, volatilization and other spread of the Dicamba herbicides from the fields and crops on which they were applied."

"As a result of the damage to or eradication of the plants from which the Plaintiffs bees acquired their nectar and pollen, and the resulting reduction in the production of honey by the bees, Plaintiff has sustained loss of sales and income from the sale of honey," the complaint alleged. "Plaintiff has also sustained the loss of bees through the effects of the Dicamba herbicides on the bees in the reduction in their food supply necessary to support their lives."

Ultimately, the complaint accuses Bayer of a laundry list of illegal activity, including violating a federal statute -- the Lanham Act -- by lying about the drift and volatilization potential of its herbicide, manufacturing unsafe products and not properly instructing or warning users about their dangers and violating the Arkansas Deceptive Trade Practices Act. It also accuses Bayer of negligence, "creating a nuisance" and trespassing with its chemical and argues it should be held strictly liable for all damages to Coy's farm.

The complaint asks for a jury trial and for compensation of "an amount exceeding $75,000" for Coy's income losses, as well as requesting unspecified punitive damages.

Bayer's emailed statement to DTN in response to the lawsuit reaffirmed the company's confidence in its XtendiMax herbicide. "Bayer stands strongly behind the safety and utility of our XtendiMax herbicide. We will continue to defend this technology, and we believe the extensive body of science and the favorable conclusions by the Environmental Protection Agency (EPA) will ultimately determine the outcome of this litigation," it read.

The group of Texas High Plains grape growers filed their opening petition in a state court, the Jefferson County District Court of Texas, on June 4.

The plaintiffs represent four grape processors, as well as 57 vineyards encompassing 3,000 acres -- the majority of grapevines in the High Plains, a region where most of the vineyards supplying Texas's $13-billion wine industry reside.

The lawsuit argues that dicamba damage was never an issue to the state's grapevines until Monsanto (now owned by Bayer) released its dicamba-tolerant cropping system in 2016 and the accompanying herbicides joined the market in 2017. Dicamba applications on surrounding cotton fields in the High Plains have since caused major damages to the entire grape-producing industry, the lawsuit alleges.

"The cloud of dicamba that now covers the High Plains each summer has crippled what was an award-winning and rapidly growing industry," the lawsuit states. "The vineyards have seen their production fall dramatically, and what grapes do grow are often rejected for poor quality. Contracts have been canceled, winemakers have had to seek grapes elsewhere, and a stigma has attached to the region. The overall value of these vineyards has been significantly impaired both now and in the future."

Like the Coy case, the grape growers demand a jury trial and cite weed scientists' warnings and internal company emails on damage projections from dicamba. They argue that Monsanto/Bayer and BASF were negligent in designing, marketing and selling their dicamba herbicides and are strictly liable for damages from them.

The Texas plaintiffs argue they have lost over $114 million in economic damages and are seeking to recover those losses, as well as at least $228 million in punitive damages from each company.

In response to this lawsuit, Bayer sent DTN a statement stating: "We have great sympathy for any grower who suffers a crop loss, but there are many possible reasons why crop losses might occur including extreme winter weather conditions that can have particularly devastating effects on perennial crops like vineyards. While Bayer has not been served with the Texas lawsuit, we stand strongly behind the safety and utility of our XtendiMax herbicide and will continue to defend this technology. The EPA has comprehensively evaluated XtendiMax and determined it does not pose any unreasonable risks of off-target movement when used according to label directions."

BASF's emailed statement to DTN also suggested that weather and other factors were more to blame for the Texas grape growers' losses: "BASF has had the opportunity to review these claims and the alleged damage and strongly disagrees with the allegations in the lawsuit. It is well documented that a 2019 freeze contributed significantly to the grower's current complaints and that other known sources of herbicides, such as applications to public rights of way, have been ignored by the growers."

The statement went on to cast doubt on the grape growers' motives and defend BASF's product. "It's also interesting to note that these growers did not raise their claims until after Bayer announced its $300,000,000 settlement with soy growers in June of 2020," it read. "We formulated our dicamba product to significantly reduce off-target movement and conducted extensive testing before receiving EPA approval to market Engenia herbicide in 2017. In addition, because of BASF's commitment to stewardship, we continue to provide training to applicators and emphasize the importance of following the label requirements for Engenia herbicide to achieve on-target applications."

See a news release and other documents from the Texas grape growers' legal team here: https://shjlawfirm.com/…. 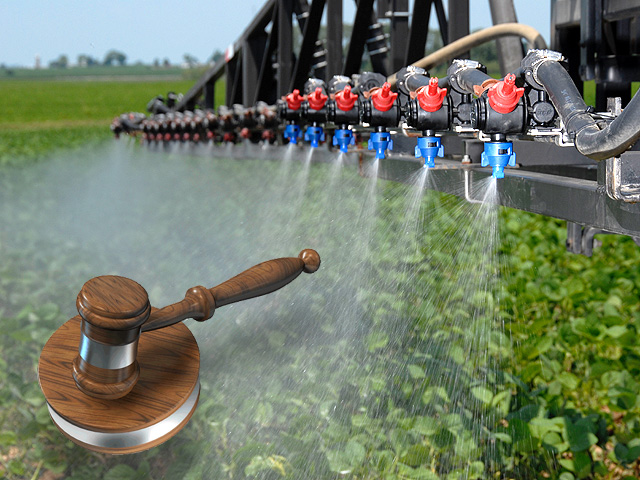