ROCKVILLE, Md. (DTN) -- EPA is facing a tangle of lawsuits over its 2020 registration of three over-the-top dicamba herbicides, XtendiMax, Engenia and Tavium.

Given the many legal steps ahead for them, these lawsuits are unlikely to immediately affect the legal availability of dicamba in 2021, but they could threaten the chemical's use in spray seasons to come.

The lawsuits have been brought by two different groups of plaintiffs with two very different complaints. On one side, agricultural commodity groups are arguing the new dicamba labels are too restrictive; on the other, environmental groups argue they are too permissive.

Some of these cases are frozen for 60 days, as President Joe Biden's newly appointed EPA reviews all regulations created by the agency since 2017. But for now, here's a breakdown of the existing lawsuits, and what actions are expected ahead.

This group of plaintiffs -- the National Family Farm Coalition, Center for Food Safety, Center for Biological Diversity and Pesticide Action Network -- are a familiar cohort to the agrichemical industry. They are the same groups that successfully filed a lawsuit against the 2016 and 2018 dicamba registrations, which ended in the U.S. Court of Appeals for the Ninth Circuit vacating the registrations of XtendiMax, Engenia and FeXapan on June 3, 2020. See the DTN story here: https://www.dtnpf.com/….

In that judicial opinion, three federal judges laid out a list of hurdles EPA would have to overcome in future dicamba registrations. Specifically, the judges concluded EPA either underestimated or entirely ignored known risks of dicamba off-target movement to surrounding environments and farming communities in their 2018 registration. They also concluded that the technology had anti-competitive effects, as farmers purchased dicamba-tolerant crops to protect themselves and told EPA that the herbicides' complex labels invited non-compliance.

The National Family Farm Coalition et al. is now arguing that EPA's new 2020 dicamba registration has not fixed any of the problems highlighted in that Ninth Circuit court ruling.

In order to challenge the new registration, this group of plaintiffs have filed two lawsuits:

This 96-page complaint argues that:

-- The new registrations ignore the same "unreasonable adverse risks" of dicamba use on dicamba-tolerant crops that the past registrations did, and thus violate the Federal Insecticide, Fungicide and Rodenticide Act (FIFRA).

-- EPA was required to provide "notice and comment" for a new pesticide registration and neglected to do so.

-- EPA was required to provide "notice and comment" for its decision to change how it oversees Section 24(c) labels and neglected to do so. (See more on that EPA decision here: https://www.dtnpf.com/….)

This complaint was filed in late December 2020. So far, Bayer has filed a motion to intervene as a defendant, to help EPA defend its registration of the company's XtendiMax herbicide. BASF and Syngenta will likely file to intervene in this lawsuit, as well, to defend their herbicides, Engenia and Tavium, respectively.

This petition asks the Ninth Circuit court to once again vacate the EPA's dicamba registrations based on the argument that:

-- EPA failed to provide notice and comment on its change to Section 24(c) labels.

-- EPA also violated the Endangered Species Act by not consulting with the right. agencies to ensure the registration won't endanger listed species or critical habitats.

Bayer, BASF and Syngenta have all filed motions to intervene in this case and help EPA defend its registrations.

The plaintiffs asked the court to assign the case to the same panel of judges who heard the past lawsuits and subsequently vacated the 2018 registrations of XtendiMax, Engenia and FeXapan. The court agreed to do so.

However, this case has now been transferred out of the Ninth Circuit to a different federal circuit court of appeals to be consolidated with another set of lawsuits against the same 2020 dicamba registrations (see below). The National Family Farm Coalition et al. may try to get the case transferred back to the Ninth Circuit, but for now it is in the hands of the U.S. Court of Appeals for the District of Columbia Circuit.

There, the case is on hold for 60 days, as the Biden EPA evaluates all regulations created by the Trump EPA since 2017, including the 2020 dicamba registrations.

This group of plaintiffs -- the American Soybean Association and the Plains Cotton Growers -- are suing EPA for the opposite reason: They argue the 2020 dicamba registration is too restrictive for soybean and cotton growers and hurts their ability to control herbicide-resistant weeds.

Like the environmental groups above, the ASA and Cotton Growers have opted to cover all their bases by filing multiple lawsuits in different federal courts:

This 30-page complaint, filed in November 2020, argues that:

-- The federal label's cutoff dates of June 30 and July 30 for soybean and cotton growers, respectively, are too restrictive and could hurt growers who plant these crops later in the summer.

-- The newly required buffers on the federal label (240-feet and 310-feet for endangered species) are too large and will limit farmers' ability to control weeds on a significant part of their acreage.

This complaint asks the court to find that EPA exceeded its authority in creating these new restrictions and require the agency to undo these restrictions, while keeping dicamba herbicides on the market.

So far, Bayer, BASF and Syngenta have all filed motions to intervene as defendants in this case, to help EPA defend its 2020 registrations of their herbicides.

In addition to this complaint, both the ASA and Cotton Growers have filed a flurry of similar lawsuits in federal appeals courts. Specifically, the Plains Cotton Growers filed a similar lawsuit on their own against EPA in the U.S. Court of Appeals for the Fifth Circuit. The ASA also filed independently against EPA in the D.C. Circuit Court of Appeals. Those cases have all been consolidated into:

These consolidated cases now argue together that:

-- EPA's federal dicamba cutoff dates are too restrictive and not supported by evidence.

-- EPA's federal buffer requirements are too large and not supported by evidence.

This case has now been consolidated with the National Family Farm Coalition et al. case, despite their vastly differing arguments against EPA's registration. Unless the environmental groups get their case transferred back to the Ninth Circuit, they will be heard together in the D.C. Circuit Court of Appeals. However, as stated above, this case is now under a 60-day freeze, as the Biden administration reviews all EPA's regulatory actions for the past four years.

In the meantime, some of the arguments from the ASA and Cotton Growers may soon be addressed at the state level. Specifically, Texas, Oklahoma and Louisiana pesticide regulators have indicated that they will be using Section 24(c) special local needs labels to extend the federal cutoff dates for dicamba use in their states to accommodate late-planted soybeans and cotton fields. (See more here: https://www.dtnpf.com/…). 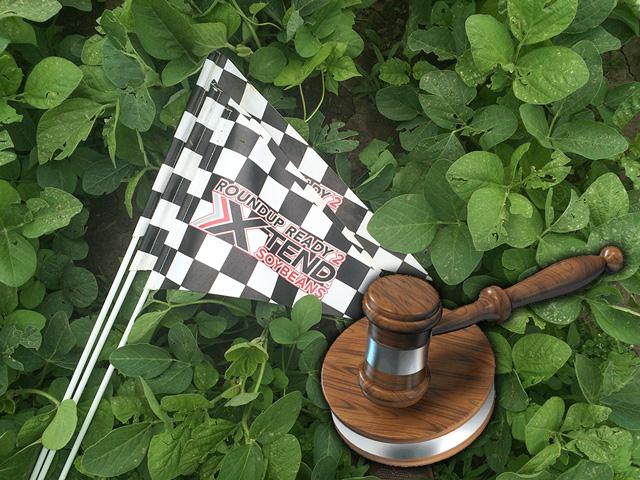