After watching them return year after year, undeterred by his insecticide seed treatments, Lakey tried to strike a friendly deal in 2015. He'd plant a little extra wheat each year, the wireworms would eat their share, and he'd take the rest.

"We basically replaced the cost of the seed treatment with extra seed, and gave them a bigger buffet," Lakey recalled. "And it worked!"

That year, wireworms devastated 20% of Lakey's crop acreage, eating through not one, but two spring wheat crops planted and replanted on 1,500 acres where he farms near Soda Springs, Idaho. Their numbers were astonishing, Lakey recalled. Typically, wireworms feast in late spring and then retreat as the summer heat cranks up. But even in early July, when they pulled up plants on those doomed acres, Lakey would find the tiny orange pests, writhing like snakes, furious to have had their meal uprooted. He estimates that between replant costs and lost yield, the wireworms cost him $300,000 in 2020.

Lakey is definitely not the first farmer to be taken off guard by wireworms, said Haley Catton, a cereal crop entomologist with Agriculture and Agri-Food Canada. Thanks to an unusual life cycle and a wily ability to survive insecticides, they can lurk beneath growers' radar for years, slowly building their populations.

The cool spring of 2021 brought renewed attention among Midwest farmers to these soil-dwelling pests. While planting moved quickly this year, cool, wet weather slowed emergence in many places in May, leaving young corn and soybean seeds and seedlings vulnerable to wireworms for a longer period of time, just as the insect was becoming active. Entomologists from North Dakota and Nebraska out to New York and down to Alabama sent out alerts this spring, reminding growers just how unusual this pest is, and how hard it is to control.

But there's hope at hand: a new seed treatment insecticide active ingredient called broflanilide, which saved Lakey's wheat this spring and could help growers control infestations in the years to come -- if they steward it carefully.

"It will be a really valuable tool, if we can keep it," Lakey said.

AN INSECT IN WORM'S CLOTHING (AND OTHER STRANGE HABITS)

Right off the bat, wireworms are deceptive, Catton noted. "They're actually not worms," she explained. "They are insects -- the larval stage of the click beetle."

Nor do the surprises end there. Unlike many insects, which move from egg to larva to adult in a single season, wireworms enjoy a more leisurely lifestyle.

The adult click beetles overwinter in the soil and lay their eggs in the spring, which hatch into tiny wriggling wireworms, known as neonates. These neonates are too small to do much damage, but after their first winter, they wake up the next spring as "resident larvae," larger, adolescent wireworms.

Like many human teenagers, these youthful wireworms are in no hurry to grow up. "For most species, they live in this stage for three to five years," Catton noted.

That means at any given time, your soils can contain a bustling household of wireworm generations, from newly hatched neonates, to adolescent wireworms and fully formed click beetles. "That really complicates management," Catton noted. "You can have wireworms feeding today that represent the egg laying of females four years ago. So it's hard to know when your problem started and what crop initially attracted them."

Perhaps most recognizable to human parents? The teenaged wireworms' appetite. "They are very big eaters," Catton explained. And they're not picky, as Lakey discovered. They love grasses, and favor cereal crops such as wheat, barley and oats. But they will eat a huge range of seeds and seedlings, including row crops like corn and soybeans, as well as vegetables and ornamentals. None of Lakey's rotations away from cereals seemed to phase them, he recalled.

"Prior to this, we've been using rotation to try to remedy certain acres where they were really bad," he recalled. "We'd been using mustard on them, peas, flax and cover crops. It didn't seem to matter. The more diversity we put in, the worse they were."

It's also very difficult to wait them out. They can live off organic matter in empty fields for years, Lakey discovered. "Fallowing the fields didn't help," he said. In fact, some species can take an entire year off feeding, simply retreating deeper into the soil and waiting for a new food source, Catton explained.

Anecdotal reports from Canadian Prairie farmers suggest they do just fine in dry conditions, too, although it's hard to know if they actually increase activity or if drought-stressed plants simply show their damage more, Catton added.

"They're just so resilient to any kind of stress," she said.

For years, farmers fought wireworms with an organochlorine insecticide called Lindane, but it was pulled off the market in 2006, due to environmental and human health concerns.

The neonicotinoid seed treatments that industry has since moved to only suppress wireworm feeding temporarily. When wireworms feed on neonicotinoid-treated seed, they don't die, they just get drunk and sleepy. More scientifically speaking, they become "moribund" and fall into a heavy, pesticide-induced slumber, Catton explained.

"What neonicotinoids do is protect the crop by putting wireworms to sleep for a few weeks and during that time, young seed and seedlings aren't being fed on," she said.

The wireworms recover from this drugged dozing just fine, but when they awake, their target plants are bigger, stronger and more resilient to their feeding. The result is less stand loss from wireworm damage, but -- as Lakey discovered -- continued population build-up each year.

"The more I've learned about wireworms, the more I've realized we were just kicking the can down the road, letting their generations build up until they just exploded," he said.

BASF is marketing this new insecticide as Teraxxa, a seed treatment for cereal growers. EPA granted Teraxxa a registration in January 2021, and Health Canada approved it in October 2020. (Canadian growers have access to another BASF product containing broflanilide, as well, called Cimegra).

This year, Lakey was among the first American farmers to use Teraxxa on his infested acres. Unlike other insecticides, broflanilide kills wireworms that ingest it and knocks back populations more permanently.

See more on it from DTN here: https://www.dtnpf.com/…

For Lakey, it was a lifeline on those wireworm-infested acres this spring. "We've done a lot of digging and haven't found any dead plants with a wireworm in it yet," he said. "We're cautious, but we're excited."

BASF studies suggest the insecticide can kill up to 80% of a wireworm population in a year. Studies by Canadian scientists show similar results, with broflanilide providing the same stand protection as neonicotinoids, but at much lower doses, and with the added benefit of also reducing neonate wireworms by 73% and resident wireworms by 81% in wheat fields in British Columbia.

Lakey, who has transitioned to no-till and uses cover crops and crop rotations to keep his soil healthy, expects to use Teraxxa again, but hopes he won't have to dose his seeds every year in the future.

"It appears to kill enough of a population, so that we can maybe use it a few years and then rotate away from it," he said. As the product becomes more commercially available, he hopes industry and other farmers take a similar tack to avoid insect resistance and unintended environmental impacts. 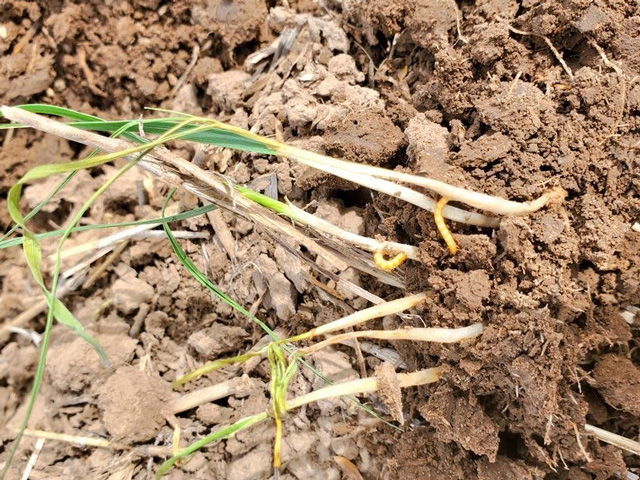