Economics and market fundamentals may prompt some farmers to abandon traditional crop rotation in favor of more soybeans this spring.

However, growers can take steps to manage these and other agronomic challenges to get the most out of consecutive soybean crops.

"Some farmers see continuous soybeans as a viable option when prices are high," said Clarke McGrath, an agronomist and on-farm research and Extension coordinator for the Iowa Soybean Research Center at Iowa State University.

Meanwhile, soybean prices have continued to climb, thanks to strong exports, especially from China, robust domestic use and supply concerns.

Planting soybeans after soybeans isn't an option for every farmer or every field, McGrath added. But many growers make it work. "Farmers can reduce the risk but not eliminate it with good management. It can set them up for success."

Cole and Zach Bailey intend to plant more than 80% of the 12,000 acres they farm with their parents near Xenia, Illinois, to nongenetically modified soybeans this year. Corn and winter wheat are often part of the mix, but the family has long favored a soybean-centric rotation. Some years, they grow soybeans exclusively.

The Bailey brothers see less risk growing soybeans than corn on their heavy clay soils that are always "a week away from drought." They believe intense management can overcome agronomic challenges of continuous production to make the system productive and profitable.

"People say you need to rotate crops, (but) they aren't paying (the farm's) bills," Zach Bailey explained. "You need to put pencil to paper. With soybean prices now, (continuous) soybeans is a no-brainer for some farmers.

"If you stay on top of management, you can grow a heck of a soybean crop year after year," he added. The Baileys' soybean yields average 45 to 50 bushels per acre (bpa). In Clay County, where their farm is based, the average soybean yield was 40.5 bpa in 2019, according to USDA.

Here are five tips to increase your odds of success with planting soybeans after soybeans.

"I would say the No. 1 thing for farmers to consider is land," McGrath said.

Pat Holloway, a field agronomist with Beck's Hybrids, said farmers should test fields for SCN if they haven't already. "This is a key step. If SCN populations are moderate to high, farmers run the risk of escalating SCN pressure with soybeans on soybeans and reducing yields."

Seedling diseases such as Pythium, Phytophthora and Fusarium can pose enhanced challenges in continuous soybeans since the disease cycle isn't broken by a different crop. The same goes for foliar diseases such as frogeye leafspot and brown spot. SCN and sudden death syndrome (SDS) are also a concern.

Tony Lenz, a technical agronomist with Stine Seed, said good preplanting and in-season management is critical to continuous soybean success. Scout fields for disease and insect pressure during the growing season, and treat for both as needed.

"With any continuous crop, you have to up your management," Lenz said. "Make sure soybean seed treatments have a good disease package and pick varieties that are defensive (fend off diseases better). Switch varieties, trait packages and chemistries to mitigate resistance issues in the future."

Start with a clean field, if possible. Use multiple herbicide sites of action, use recommended rates and spray weeds in a timely fashion. Consider a layered residual program, and scout diligently.

The Baileys start with a clean, tilled field. A preemergent herbicide is applied. In-season applications are done, as needed, to prevent weeds from growing more than 1 inch tall, if possible. Multiple residual herbicides are layered during the growing season.

"Herbicide-resistant weeds and buildup of the weed seed bank are legitimate concerns," Zach Bailey said. "We rotate chemistries and traits. Next year, we'll switch to the Enlist platform."

Potassium (K) is a key nutrient to watch. Soybeans remove about 1.4 pounds of K for every bushel of production. That's 98 pounds of K per acre for soybeans averaging 70 bpa. A preseason potash or K application may be needed to ensure soils are at the recommended level, which can vary among soils and regions.

"Fields that are inherently low in potassium levels are not a good choice for continuous soybeans," Holloway said. "Soybeans remove more than in a typical corn/soybean rotation."

Soil pH is also important. Agronomists recommend pH levels of 6.0 and above for soybeans. Anything lower could affect plant nutrient uptake.

Chicken litter is key to the Bailey fertility program. They typically variable-rate 3 to 10 tons per acre to provide necessary K, phosphorus, nitrogen and micronutrients.

The nation's farmers intend to plant 87.6 million acres of soybeans this year, according to the USDA "Prospective Planting Report" released March 31 and left unchanged in the USDA's May 12 WASDE report. That's 5.4% higher than 2020.

"Realistically, the U.S. is on track for having the tightest supply situation in U.S. history," Hultman said. "This is the main reason many farmers may want to increase soybean acres in 2021. The tight carry is apt to keep harvest prices higher than normal for new-crop soybeans."

As of May 28, the soybean-corn price ratio based on new-crop futures prices is 2.52 to 1, which slightly favors soybean plantings, Jamieson said. That's above the 10-year average of 2.38 to 1.

December corn prices have tracked fairly close with soybeans and are apt to keep competing for acres this spring, Hultman added.

According to the May 12 USDA World Agricultural Supply and Demand (WASDE) reports, the U.S. ending stocks estimate of 1.257 billion bushels of corn in 2020-21 is also the lowest in seven years and has room to go lower by the end of the marketing year in August.

However, Hultman pointed out corn does not show the same risk of running out.

"For that reason, the expectation of much higher soybean prices is a strong incentive for those willing to plant more soybeans in 2021," Hultman concluded. 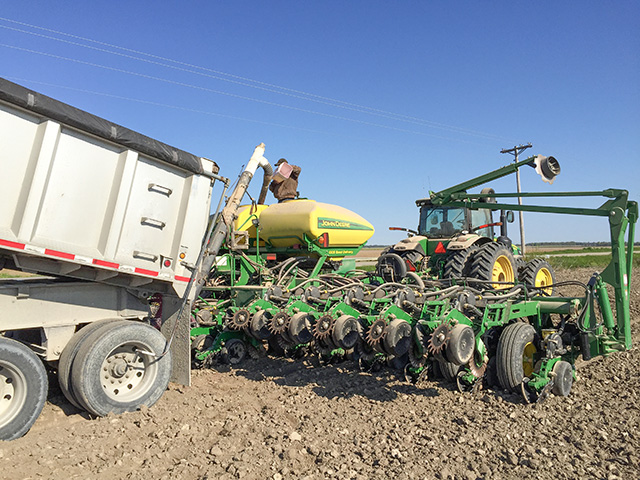