ROCKVILLE, Md. (DTN) -- It's April 1, but agronomists aren't fooling around when they tell you it might be time to start planting soybeans.

Planting soybeans before corn fields has been a growing and profitable trend for many farmers, agronomists told DTN.

"Back in 2015, I would talk to farmers and they would say, 'I don't plant beans until I can wear shorts,'" recalled AJ Woodyard, lead agronomist with Advanced Agrilytics. "That year was the first year I did research planting soybeans on April 1 and got 95-bpa beans. It's just become more and more mainstream from there."

Kris Ehler, a sales agronomist with Ehler Bros. in Illinois, and a long-time proponent of early soybean planting, has tinkered with the practice for over a decade. He's confident that a soybean field planted April 20 can out yield an identical field planted May 20 by at least 8 to 10 bushels per acre (bpa). In the 12 years Ehler has pushed bean planting into April and March, he's only lost one field to a stand-killing freeze. For Woodyard, the practice is similarly robust, with March- and April-planted soybean fields dodging freeze damage five out of every six years, for up to 20-bpa yield bumps over their May-planted counterparts.

So why the hesitation? Farmers and the industry have long focused on soybeans' vulnerability to freezes, due to the way they thrust their tender growing point up into the air almost as soon as they emerge. But the industry is slowly starting to understand just how cold hardy the humble soybean seed is -- even hardier than corn, Ehler said.

After their initial sip of water in the first 24 hours underground, known as the imbibitional phase, soybeans take their cues from their surroundings, Ehler explained. They only take in additional water when temperatures are conducive to growing. As a result, soybean seeds can lay dormant as long as soils are too cold for emergence -- almost in a state of hibernation, as Woodyard describes it.

In contrast, the soybean seed stops pedaling as soon as temperatures drop -- which is why Ehler and Woodyard have seen bin-busting soybean yields from fields that took three weeks to emerge in the early spring.

Both Woodyard and Ehler have found spring-tilled fields are a safer bet for early planting as they warm up faster and provide a consistent seedbed. "You don't get quite the same uniform warming in a no-till field," Woodyard noted. "The other thing we've noticed is that if you have emerged soybeans and they're touching wet residue and you get a freeze, that can kill those seedlings."

This year might be an exception, depending on the weather and moisture in your region this past March, Ehler said. "I'm putting an asterisk on this one for some places this year, because, for example, in our [central Illinois] environment, there will be some no-till opportunities to plant early as we are still in a slight drought and have had such a warm March."

Growing research has given soybean growers plenty of reasons to reconsider the economic return of seed treatments. (See more here: https://www.dtnpf.com/…) But early planted fields are probably not the place to start experimenting with removing fungicide- and insecticide-treated seed, Woodyard and Ehler said. Seeds that sit for multiple weeks in cool soils will be especially vulnerable to soil-dwelling diseases and insects.

"This is not a place where I would opt to lose insurance," Woodyard said. "Disease is the bigger concern, but you're also the flocking site for every bean leaf beetle in the area."

If you have fields with known disease pressures such as SDS, Pythium or phytophthora, maybe don't opt for early planting on them in your first year of trying it, he added.

Early soybean planting is essentially expanding your growing season. Opting for a longer maturity group can help you further milk that advantage, the agronomists said. Stick to the high end of a normal range for your region.

Many ag laboratories offer a host of ways to stress test seeds for their germination abilities. If you have time for a two-week turnaround, consider ordering a cold germination test, which tests how well a soybean seed germinates in cool, wet conditions, or an accelerated aging test, which tests how a soybean seed holds up to high heat and humidity. Both tests will help you know which varieties are most tolerant of early season stresses, Woodyard said. "We absolutely use this to prioritize what varieties we're going to push," he said.

It might seem counterintuitive, given the potential stand stresses, but both Woodyard and Ehler recommend lowering planting populations in early planted soybean fields.

At issue is the early planted field's increased yield and growth potential. "Plants put on more nodes because of more day length during reproductive phases, so if you're over populated, you will get internodal elongation, rank beans and lodging issues come harvest," Ehler explained.

Plan on 75% to 80% stand survival for fields planted in late March and early April, Woodyard added. As the planting date moves into mid to late April, that stand survival should rise to 90%, so growers can adjust their seeding population accordingly.

Don't go too shallow on early planted fields, Ehler cautioned. Recent research from 2011-2013 at the University of Nebraska has pinpointed 1.75 inches deep as the optimal depth for soybean planting at any time of the year, with yields taking a hit at depths shallower than 1.25 inches and deeper than 2.25 inches. See more here: https://cropwatch.unl.edu/….

"Ultimately, you can't ever outguess a freak weather event; you are playing the odds," Woodyard said.

Study up on your region's crop insurance planting dates and any free replant guarantees that might be offered by your seed supplier (which are often tied to local crop insurance dates).

By mid- to late-April planting, many Midwestern soybean growers should qualify for free replant from most major seed companies, Ehler said. But keep in mind the added time, fuel and other costs that come with another trip across the field. "Weigh your risk of replant versus the reward -- essentially $100/acre out there in added yields," he said.

See more tips on doing it successfully from the University of Nebraska here: https://cropwatch.unl.edu/…. 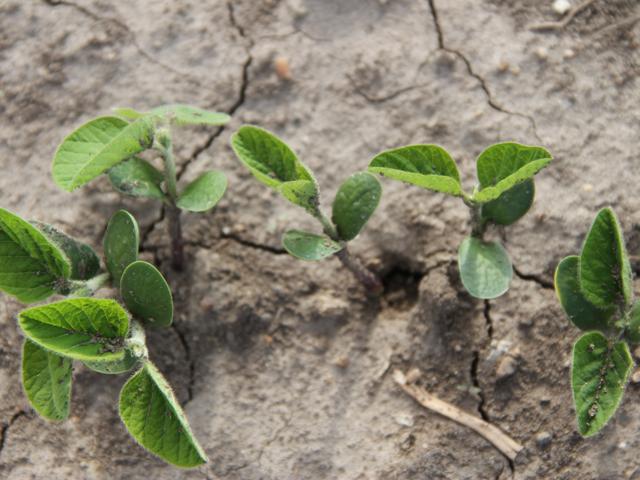