CLRDV was discovered in two counties in Alabama in 2017, though Akhtar Ali of the University of Tulsa said cotton plants in Texas tested positive for the virus a year earlier. The virus, which causes cotton leafroll dwarf disease, is now found across the Cotton Belt.

The pathogen can interfere with normal plant growth and development, which can cause yield loss. CLRDV hasn't caused widespread damage in the U.S. yet, but scientists and growers say the potential exists.

"We're working hard to understand and address the virus before it gets out of hand," said Jenny Koebernick, an assistant professor of cotton and soybean breeding at Auburn University in Auburn, Alabama. "A proactive and collaborative effort is underway to address a potential problem. If conditions align just right, CLRDV can be damaging."

The virus is transmitted to cotton by the cotton aphid. Koebernick said symptomology can be influenced by many stresses. The weather, insects or plant nutrition could cause CLRDV to flare up in different ways in susceptible cultivars.

CLRDV symptoms are similar to other viruses and can also mimic nutrient deficiency, insect damage and auxin herbicide injury. In addition, apparent differences in symptom expression appear to occur between the eastern and western ranges of the Cotton Belt. Symptoms include:

-- Drooping leaves. They may be more red (leaf bronzing) in the east, but may be dark green further west such as in Mississippi.

-- Exaggerated elongation of the mainstem late in the season.

"You can't identify this virus based on symptoms alone," said Amanda Strayer-Scherer, Auburn University plant pathologist. Lab testing may be needed to confirm its presence.

CLRDV once wreaked havoc in South America and other continents. In Brazil, yield losses of up to 80% were reported in susceptible cultivars before resistant cultivars were developed for two strains of the virus: typical and atypical. The U.S. variant is different than those strains. So, resistant cultivars that were developed to combat the disease in South America aren't effective in the U.S.

The 2020 season was a "mild year" for the virus, according to Koebernick, having little effect on overall U.S. cotton production. Researchers said it's difficult to quantify exact yield losses to the virus since other abiotic and biotic factors often play a role.

CLRDV infection rates and yield losses within fields can vary widely. Auburn research indicates yield losses of zero to 50% can occur. If losses occur, researchers said it's usually at the lower end of the range. In 2017, Auburn University estimated CLRDV affected 25% of Alabama's cotton in 2017 with an average yield loss of 4%, which collectively cost farmers $19 million.

Research indicates yield losses, if they occur, are usually more severe the earlier the virus is transmitted to plants.

Koebernick recalled an extreme case in Baldwin County, Alabama. The virus decimated a field in 2018, in which little to no bolls were left to harvest.

The cotton industry and scientists have sprung into action to fight CLRDV. The Foundation for Food & Agriculture Research awarded a $150,000 Rapid Outcomes for Agriculture Research grant to Auburn University to test the effectiveness of more than 1,500 existing and new cotton lines, cultivars and varieties at resisting the disease. Cotton Incorporated and Auburn matched the grant.

Koebernick led the testing effort in 2019 and 2020 on two research farms. No plants exposed to the virus were immune, she said.

"We're at the point now that we're looking at lines that can be infected and trying to understand tolerances," Koebernick added.

University researchers also collaborate with farmers and agronomists, among others, to plant sentinel plots across the Cotton Belt to assess the distribution of symptoms and the disease. If plants test positive for CLRDV, the goal is to see how environmental, geographic and agronomic factors play a role. They also look to see which varieties and cultivars are more vulnerable to yield loss or show signs of resistance.

"I think this is particularly helpful for those of us doing screening for resistance," he said.

Cotton grower Ryan Jenkins of Jay, Florida, who participated in DTN's annual View From the Cab series last year, will plant a CLRDV research plot this year in cooperation with retail and agronomy partner GreenPoint AG. It will consist of 20 to 30 cotton varieties on 8 to 10 acres. The plot will likely be planted in May, if conditions allow, along with the rest of Jenkins' 1,100 to 1,200 acres of cotton. His other major crop is peanuts.

"We do a lot of research on the farm," Jenkins said. "I learn so much by listening to agronomists and researchers and walking fields with them."

Jenkins said the virus has been identified on his farm the past three years, but yield loss, if any, is hard to gauge. In 2020, two hurricanes severely damaged Jenkins' cotton, including his CLRDV research plot. Jenkins estimates 2020 cotton yields averaged about 600 pounds per acre, about two-thirds less than expected.

"We know CLRDV is here, but we are still not sure how big of a role it's going to play in our production," Jenkins said. "In the meantime, we need to be learning how to manage this disease moving forward. It's just the smart thing to do."

Research suggests cotton aphids can transmit the virus to cotton in less than a minute and can spread it for 8 to 12 days. Spraying to manage aphids to prevent CLRDV is futile, according to research conducted by entomologists Alana Jacobson at Auburn University and Phillip Roberts at the University of Georgia.

"Be mindful that even though cotton aphids transmit the virus, this does not mean that all fields that have an aphid infestation are infected with CLRDV," Tom Allen, Mississippi State University plant pathologist, said in a press release.

Keeping cotton as healthy as possible is recommended, which will reduce plant stress to help it combat the virus.

Weeds are known to harbor cotton aphids and could serve as a bridge between virus-infected weeds and cotton. An effective weed control strategy may reduce the transmission of CLRDV, but more research is needed in this area.

"In terms of management, cotton stalk destruction and having a good winter weed burndown may help reduce overwintering of the virus and vector," said Strayer-Scherer. "Planting early may help as later-planted cotton is more at risk." 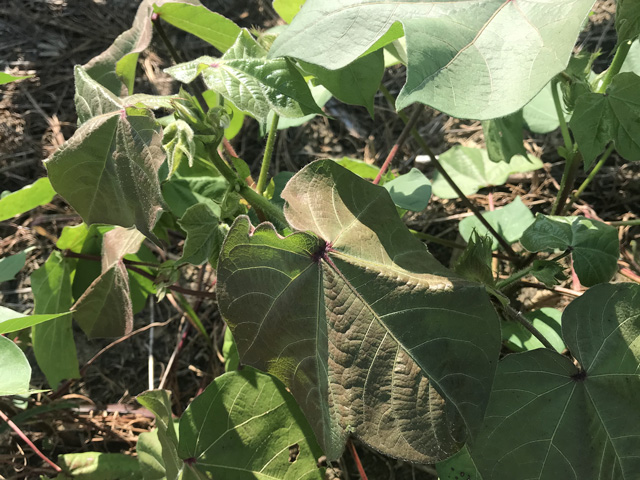