OMAHA (DTN) -- Investments need to be made to improve both U.S. and Canadian infrastructure to assure that agricultural products can be shipped in a timely fashion, according to analysts. Without these investments, the two countries risk losing international business because of delays in the transportation system.

U.S. Chamber of Commerce Vice-President of Transportation and Infrastructure Ed Mortimer spoke about the transportation outlook in the United States.

Aging transportation structures are costing the U.S. economy $170 billion in productivity due to congestion, he said, and every year investments are not made the congestion only gets worse.

Mortimer said his organization has three priorities when it comes to infrastructure investment: Improvements need to be made to the interstate highway system, bridge network and border crossing.

"Many industries would benefit from improved border crossings," Mortimer said.

The federal investment into infrastructure could be coming soon after many years of being delayed. He likened it to a football team being in the "red zone" of realizing investment from the federal government.

The Interstate Highway system is the backbone of our country in terms of transportation and needs major improvements, he said. A third of the bridges in the country are structurally deficient and need to be repaired or replaced, he said.

To raise money for the federal investment of infrastructure, Mortimer said his organization is pushing for a change to the federal gas tax. Since 1993, the gas tax has not been adjusted.

An increase of five cents a year over five years would help to increase funds for the government, he explained. This would generate $400 billion to be seed money for making an infrastructure bill a reality.

Mortimer said the second part of the plan to invest in infrastructure would be to transition to a vehicle mile program and move away from a gas tax. With more vehicles being electric, a mileage-based program would be fairer way to raise funds for infrastructure, he said.

The plan would need to be fair to the trucking industry, which should not have to pay for all highway improvements. Other options such as freight-only lanes on highways could be a future possibility, he said.

North of the border, Canadian farmers faced many transportation challenges in 2019-20 as well. Canadian farmer Jeff Nielsen, chair of the Grain Growers of Canada, said in his presentation the challenges included: a late harvest which pushed into the spring, a rail strike, the COVID-19 pandemic and rail washouts. All made moving ag products a major effort.

Delays mean lost business for Canadian agriculture, whether it be fertilizer or grains, he said. Customers won't tolerate transportation delays.

"Our international customers knows there are other places they can go for their needs and in the grain sector that is an extreme worry for us," Nielsen said.

The Canadian transportation system still faces some challenges despite some recent federal investment. These areas include rail capacity, growing time in ports for vessels, coordination of movement between railways and terminals and container capacity.

The COVID-19 pandemic, in particular, played havoc with the transportation of various Canadian ag products in 2020, Nielsen said.

"The grain sector found itself very fortunate, we recovered the fastest and we are looking at extremely high grain shipments into the spring through the summer and into the fall," he said. 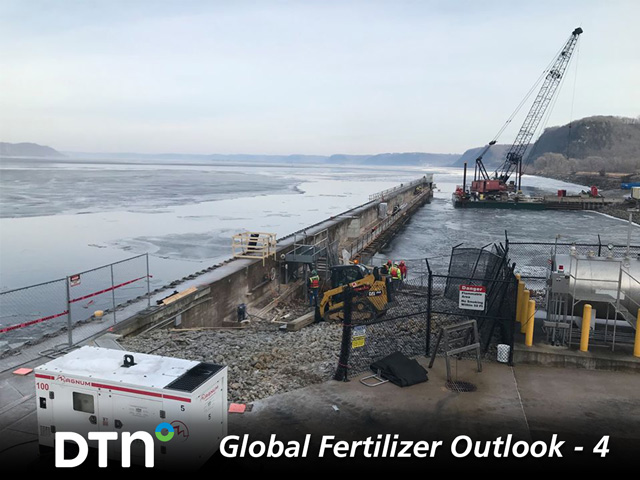