Populations of both western and northern corn rootworm are rebounding after a mild winter and favorable egg hatch conditions this year, and they're bringing some bad habits along: growing Bt resistance.

Corteva Agriscience recently confirmed their second report of western corn rootworm resistance to Cry34/35Ab1, the Herculex RW trait that is the underpinning of most pyramided rootworm hybrids, this summer. The trait is usually offered in pyramids that cross many brand platforms, with names such as SmartStax, QROME, Intrasect Xtreme, AcreMax Xtreme and Agrisure 3122.

With resistance already established against the other three rootworm Bt traits, growers in intensive corn-growing regions may need to be more innovative than ever when it comes to managing this pest, entomologists told DTN.

Here are four big takeaways for the 2021 season.

As a result, the actual state of resistance to Cry34/35Ab1 (Herculex RW) is likely more widespread, noted Bryan Jensen, University of Wisconsin entomologist. He uses the term "field resistance" to describe the unexpected damage growers see in their fields that never gets officially confirmed with time-consuming laboratory tests.

"We have been dealing with field resistance to the other traits [Cry3Bb1 and mCry3A] for a while now," Jensen said of Wisconsin corn growers. "My feeling is that we have been relying on that Cry34/35Ab1 protein and not diversifying management practices."

That's true of many corn-growing regions, added Ken Ostlie, University of Minnesota entomologist. "The three Cry3 traits have taken the brunt of it, because of cross-resistance between them," he noted in a university webinar in July.

That means that rootworm populations that are resistant to one Cry3 Bt protein, such as Cry3Bb1, can also tolerate another, such as mCry3A, even if they never encountered that trait in the field. That's why researchers rapidly discovered resistance to eCry3.1Ab (Duracade) in 2016, even though the trait had not yet been widely commercialized. See more here: https://www.dtnpf.com/….

As a result, Cry34/35Ab1, which remains the lone functioning trait in many common corn pyramids, is under a lot of selection pressure, Ostlie and Jensen said.

2. SOME POPULATIONS SAW A REBOUND

Several years of low corn rootworm populations have lulled some farmers into a feeling of safety, but between the mild winter in 2019-20 and good egg hatch conditions, populations are rebounding in some localized areas, entomologists and agronomists warned this summer.

Kris Ehler, a sales agronomist for Ehler Bros. Company in Thomasboro, Illinois, has been staking out yellow sticky traps in soybean fields of his customers for several years now to track adult rootworm beetles. This year, when one field saw numbers spike above the threshold, Ehler was ready.

"We notified our customers all within a two-mile radius of that area that they need to use some sort of additional protection in corn next year, whether it's Bt-traited hybrids or soil insecticide," he said.

In some states, growers have resources to track rootworm numbers, including university sentinel plots, such as Iowa State's monitoring network, found here: https://crops.extension.iastate.edu/… and the University of Illinois' seasonal pest survey: https://farmdoc.illinois.edu/….

Some seed companies also monitor rootworm populations, so check with your company's representatives to see if they have a network you can review. And remember that Bt resistance does not vanish during low-population years.

"Even though numbers appear lower, the Bt resistance genes have not disappeared," Ostlie warned. "They're still there and will wait for conditions to be more favorable for corn rootworm."

3. SWITCH YOUR MANAGEMENT UP

Jensen is urging growers to consult the Handy Bt Trait Table, or talk with a seed company agronomist, to get an understanding of exactly what rootworm Bt traits they have used on their operation for the past few years. It can be hard to rotate to other rootworm Bt traits, since the four available ones are often grouped together in similar trait packages between seed companies, but the Handy Bt Trait table can help you sort it out: https://www.texasinsects.org/….

"This is a black box to a lot of people," Jensen noted. "They may not know the specific proteins they've been using, and if they've been using the same protein for the last few years, they need to rotate them." Even more importantly, he stressed, is rotating out of corn.

Jensen also recommends that growers consider using soil-applied insecticides, which might mean considering getting the proper equipment to apply them at planting. See some University of Illinois research on the effectiveness of that, as well as seed treatments, against corn rootworm: https://farmdoc.illinois.edu/….

Adult spraying for rootworms can be helpful if you have large populations laying eggs, but it is not a good standalone management practice, entomologists said. The timing can be hard to master, especially if you get staggered emergence, and the damage is already done to roots by the time you act. But scouting for adult beetles next July should be on every corn grower's to-do list, Jensen said.

"For next year, I would recommend growers evaluate roots to make sure they're not experiencing problems with Bt resistance, and also spend some time in the field during the egg-laying period to see what kind of beetle pressure you have," he said.

4. DON'T FORGET ABOUT THE OTHER ROOTWORMS

For growers in the northern Corn Belt, western corn rootworm is not the only root-feeder surfacing in fields. Its cousin, northern corn rootworm, is becoming a more common sight in states like Wisconsin and Minnesota, Jensen and Ostlie said.

"Populations are shifting," Ostlie noted. "More northern corn rootworms are being produced out there, which leads to an unsettling question: Is this increase due to Bt resistance?"

Due to the biology of the insect, it has been historically difficult for researchers to conduct the laboratory tests, known as bioassays, to identify resistance in northern corn rootworms. But, so far, researchers have found populations resistant to both Cry3Bb1 (Yield Gard RW) and Cry34/35Ab1 (Herculex RW) in North Dakota. See more here: https://www.ag.ndsu.edu/….

Keep in mind that some variants of both northern and western corn rootworm also have the ability to survive crop rotation.

In western corn rootworms, these rotation-resistant populations lay their eggs in soybeans or other crops to survive until corn is planted the following year. In northern corn rootworms, some populations experience extended diapause, meaning they hibernate in the soil for two winters instead of one, to avoid emerging into a soybean crop. 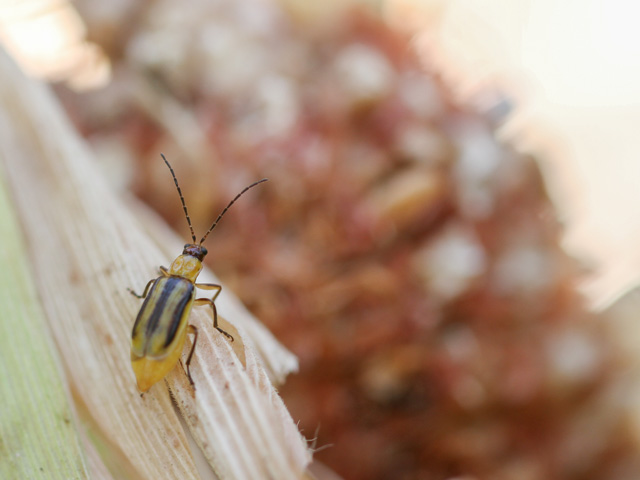