That defense is weakening this year after university entomologists have confirmed resistance in rootworm populations to eCry3.1Ab (found in hybrids containing Duracade) in Iowa and Minnesota cornfields and lower levels of resistance to Cry34/35Ab1 (the Herculex RW trait), found in SmartStax, AcreMax XTreme and Agrisure 3122 hybrids.

"Cry34/35Ab1 still seems to be effective in much of Iowa," Iowa State University entomologist Aaron Gassmann told DTN. "But because we are starting to see some adaptation, it is an early warning to farmers that they need to use the trait judiciously and with good stewardship."

Farmers facing these populations will have more limited options to fight the rootworm, which has now officially shown some level of resistance to every rootworm Bt protein on the market. You can use this Bt Trait Table guide from Michigan State University to ascertain which proteins are in which hybrids: http://bit.ly/….

The news comes as resistance to the other rootworm Bt traits on the market -- Cry3Bb1 and mCry3A -- continue to plague farmers in areas where continuous corn is common, particularly Iowa, Illinois, Nebraska and Minnesota.

Cry3Bb1 (YieldGard RW), found in VT Triple, VT Triple Pro and SmartStax hybrids, has shown documented failures since 2009, when Gassmann first tested populations for resistance to it in Iowa.

Reports of rootworm resistance to mCry3A followed shortly, and scientists have found extensive evidence of cross resistance between the two traits -- meaning a rootworm population that is resistance to Cry3Bb1 will also be resistant to mCry3A, even if it has never encountered that trait before (mCry3A is found in many Agrisure hybrids, including Duracade).

In light of these problems, companies began stacking these compromised traits with an additional rootworm trait and selling these "pyramid" hybrids to help control resistant populations. They used either eCry3.1Ab (Duracade) or Cry34/35Ab1 (SmartStax, AcreMax XTreme and Agrisure 3122) to build these pyramided products, and began to phase out single-trait products.

However, in places where Cry3Bb1 and mCry3A were already compromised, these pyramids put the selection pressure on the Duracade or SmartStax trait. Many pyramided products have smaller refuges because of their dual-trait status, which added to the risk of resistance. Entomologists warned that the pyramids may not last very long under these conditions, and this year, those predictions proved true.

In April, a team of scientists published their findings of rootworm populations in Minnesota that could survive on eCry3.1Ab, the Duracade trait, in addition to Cry3Bb1 and mCry3A. Just two months later, Iowa State University scientists confirmed resistance to the Duracade trait in their state, as well.

The Duracade trait's use has not been as widespread because it lacks key import approvals, but its similarity to the other traits on the market likely contributed to the discovery of resistance in the field, Gassmann said.

"The issues with eCry3.1Ab arose because of cross resistance," he explained. "Cry3Bb1, mCry3A and eCry3.1Ab all appear fairly similar to the rootworm, and resistance to one is likely to confer resistance to the other two."

As a result, the Duracade trait is not a good choice for farmers in areas with widespread resistance to Cry3Bb1, such as Iowa, Gassmann said.

In June, Iowa State University scientists led by Gassmann published another study, this time on populations showing incomplete resistance to Cry34/35Ab1, the other rootworm trait in SmartStax. The scientists tested rootworm populations from fields in central, southeastern and southwestern Iowa. Of greatest concern were fields planted to Cry34/35Ab1 alone (Herculex RW), which showed more than two nodes of root injury, and fields planted to a pyramid with Cry34/35Ab1 (SmartStax and AcreMax XTreme), which showed greater than one node of injury.

ROTATION RESISTANCE ON THE RISE

Bt resistance is especially dangerous in the parts of the Corn Belt that have a population of western corn rootworm that survives crop rotation by laying eggs in soybean fields. Since 2014, researchers have found populations of these insects, called soybean variants, that are resistant to a number of Bt proteins.

Growers facing these populations have relied heavily on pyramids containing Cry34/35Ab1 or eCry3.1Ab, which makes the discovery of resistance to these traits especially alarming for them.

Another looming problem for corn growers is the recent resurgence of the northern corn rootworm, which also resists rotation by delaying egg hatch for two years or more. Last week, populations of northern corn rootworm with extended diapause were discovered as far south as northwestern Missouri, adding a new threat to corn growers on the margins of the Corn Belt. See the DTN story here: http://bit.ly/….

THE LONG WAIT FOR NEW TRAITS

In January, the EPA released a new set of rules for companies that register Bt-traited corn targeting the western corn rootworm in an effort to slow resistance. The rules, which will be in place for the 2017 growing season, mostly affect how farmers, companies and other industry players report and respond to resistance. The rules also require the companies to make stronger efforts to educate farmers about avoiding resistance via crop rotation, pyramided Bt products and the use of non-Bt corn hybrids with soil insecticides.

Slowing the development of resistance will be key for corn growers, as new rootworm-fighting technologies remain years away.

Most imminent is Monsanto's new rootworm trait developed with RNAi technology. MON 87411, which will eventually be marketed as SmartStax PRO, produces a gene called DvSnf7. When consumed by a western or southern corn rootworm, the trait suppresses the production of a matching gene in the insect, short-circuiting its growth and killing it.

MON 87411 was deregulated by USDA in October 2015, but it has not been approved for import by key markets such as China. The trait is not expected to be available to farmers before the end of the decade.

Monsanto also recently licensed a protein-production technique created in a Harvard lab. Known as PACE, the technique allows researchers to greatly speed up the production of Bt proteins tailored to fight resistant insects. However, even with this new tool, Monsanto representatives have said any new traits from it are at least a decade away.

You can find the Iowa State study reporting resistance to Cry34/35Ab1 here: http://bit.ly/… .

You can find the study documenting resistance to eCry3.1Ab in Iowa here: http://go.nature.com/… and in Minnesota here: http://bit.ly/…. 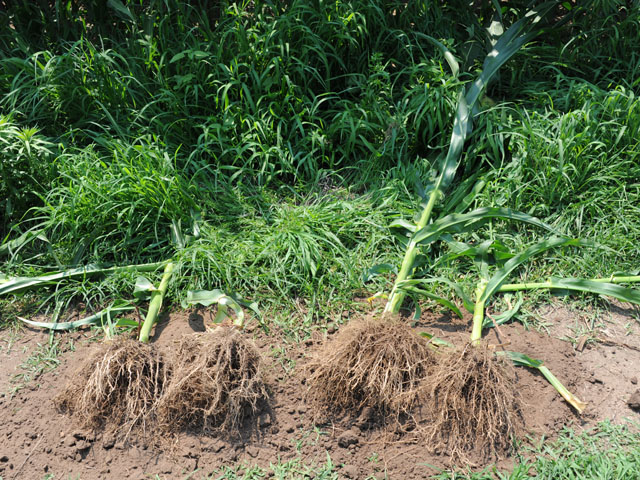