ROCKVILLE, Md. (DTN) -- Bayer's XtendFlex soybeans are now ready for a full commercial launch in the U.S. and Canada in 2021, after a long-awaited import approval came through from the EU on Monday.

The soybean variety tolerates over-the-top applications of three herbicides: glyphosate, dicamba and glufosinate (Liberty). It has been touted by Bayer as their next generation weed control platform, which will replace RR2 Xtend as the underpinning of their soybean portfolio.

The trait brings a new, in-season mode of action for soybean growers in the Xtend system facing dicamba-resistant weeds, or hoping to stave them off, crop experts noted. But it also will further increase use of glufosinate, a herbicide whose use has rapidly scaled up in the past decade, and faces resistance threats of its own.

Bayer expects a rapid penetration of the XtendFlex trait into the market next year.

"We've seen great demand for XtendFlex soybeans from our customers," Lisa Streck, Bayer soybean launch lead, said in the company's news release. "Based on that demand, we've developed a supply plan to meet the market demand in 2021, across all maturities, Bayer brands and licensees. We expect the launch of XtendFlex to match the launch scale of Roundup Ready 2 Xtend soybeans, which were planted on 20 million acres in their first year of commercial availability."

For context, about 50 million acres of RR2 Xtend soybeans were planted in 2020.

The addition of glufosinate as a postemergence option for weed control in Xtend soybeans will come as a relief to many soybean producers, both those battling herbicide-resistant weeds, as well as those who dislike the risk of off-target movement that has plagued in-season dicamba use for the past four years.

"It's going to add some much-needed flexibility, especially for growers with a cutoff date on dicamba use," added University of Arkansas Extension weed scientist Tom Barber. Arkansas growers face the most restrictive dicamba cutoff date in the country, May 25, he noted. "A lot of guys have been waiting for this trait and are excited about it," he said.

At the moment, the industry does not yet know when or if EPA will approve new registrations of the four over-the-top dicamba herbicides for the Xtend system, three of which were vacated by a federal court (XtendiMax, Engenia and FeXapan) and one that expires in December (Tavium). (See more here: https://www.dtnpf.com/….)

For some, combining Xtend soybean genetics with a different herbicide is appealing, as well.

In northwest Ohio, Genny Haun's operation moved heavily into Enlist E3 soybeans this year, despite being a fan of the Xtend genetics, in part because they didn't like the risks of spraying dicamba in-season. "We've just never had any luck spraying that product without hurting someone -- either our own stuff or someone else's," Haun explains. XtendFlex could be a more compelling option in the years to come, she said.

"It is more attractive to us now, because it gives us another option beyond using dicamba," she explained.

GLUFOSINATE USE ON THE RISE

The addition of XtendFlex is almost certain to increase applications of glufosinate, whose use has already grown significantly in the past decade.

The situation could put increasing selection pressure on the chemical, which has been a crucial tool in the fight against herbicide resistance, particularly for midsouth growers, Barber noted.

"Liberty [glufosinate] use in cotton fields really started taking off between 2008 and 2010 with the spread of glyphosate-resistant pigweed," he said. "Especially in northeast Arkansas, where we grow a lot of cotton, guys have just hammered pigweed with glufosinate the last several years."

So it hasn't come as a surprise to Midsouth scientists that growers are starting to report some concerning efficacy problems with glufosinate in recent years. The herbicide can be sensitive to certain application parameters, such as droplet size and time of day, which means weed escapes are not always necessarily from tolerance to the chemical, Barber noted.

"But we have seen a visible shift in tolerance to it in some Palmer amaranth populations recently," he said. "We're not prepared to say we have glufosinate-resistance, but we do have populations that appear to be more tolerant at field rates [1X]." (See more from Barber here: http://www.arkansas-crops.com/….)

In the Midwest, where the weed spectrum is different, Ohio State University Extension weed scientist Mark Loux said both dicamba and glufosinate have held up well so far against many of the region's toughest weeds, such as herbicide-resistant marestail and giant ragweed. But he worries about the pigweed species, which are champion seed producers.

"I think everyone is concerned about Liberty [glufosinate] and resistance," he said. "Because with the pigweeds -- waterhemp and Palmer amaranth -- you have to shut down seed production completely. If you don't finish those plants off before they produce seed, they'll beat you."

That's why Barber is watching the arrival of XtendFlex soybeans with guarded optimism.

"In the short-term, it's going to fix a lot of problems for growers who need it," he said. "But in the long term, I'm less excited. We need new herbicides."

See more on the nuances of applying glufosinate here: https://www.dtnpf.com/…. 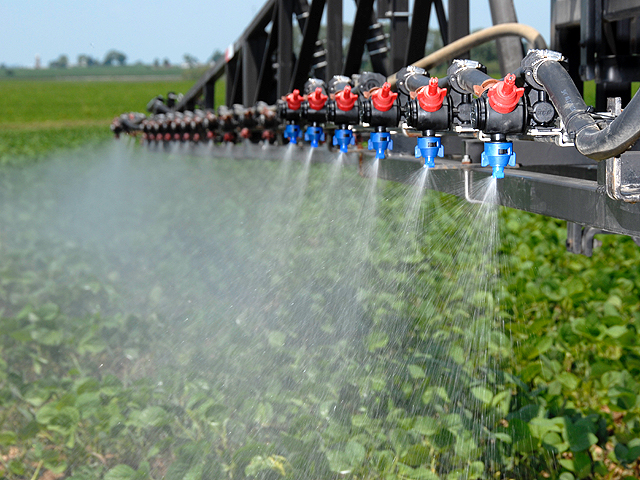