ROCKVILLE, Md. (DTN) -- When the weeds started making him feel woozy last summer, Ross Albert knew it was time for a change.

"You'd walk through the field and get a little sick to your stomach, thinking how am I going to get this all cleaned up?" said Albert, who manages farms for Soy Capital Ag Services in central Illinois. "In some areas, the weeds were so thick that it was hard to walk down a 30-inch soybean row without getting tangled up in them."

Wet weather had scuttled timely herbicide applications on those acres, but samples sent into the University of Illinois identified an even bigger problem: large populations of weeds resistant to both glyphosate and PPO herbicides. Albert now plans to use Bayer Crop Science's LibertyLink soybeans on up to 30% of the farmland he manages in 2016.

Bayer's LibertyLink crops, which tolerate glufosinate, are having their day in the sun as widespread weed resistance drives farmers into a post-glyphosate era. Growers using glufosinate for the first time in 2016 should be prepared for some adjustments in spray management, said University of Tennessee weed scientist Larry Steckel. The rise in Liberty use could help control resistant weed populations that overtook many fields during the wet spring and summer of 2015, but only if growers use it responsibly, he added.

As glyphosate resistance became widespread in the last decade, many growers leaned heavily on PPO herbicides for control, Steckel noted. Now that troublesome weeds like Palmer amaranth and waterhemp have developed resistance to those, growers' options are shrinking, particularly in the South.

The new herbicide-tolerant weed control systems from Monsanto and Dow have been slow to make it to market, and as a result, Liberty is "one of the last herbicides standing" for many growers, Steckel said.

LibertyLink soybean acres increased 50% in 2015 and will do so again in 2016, he said. Bayer also expects the use of Liberty herbicide to double in 2016 in cornfields, where more than 50 million acres of hybrids contain the LibertyLink trait. Already, 60% of the cotton varieties available to growers can tolerate the Liberty herbicide, Tanner added.

Bayer regional agronomist Daren Bohannan's list of similarities between Roundup and Liberty is a short one.

"They're both non selective, that is designed to kill anything not engineered to withstand their activity, neither one has any residual activity in the soil, and both active ingredients start with the letter G," he told DTN. "After that they're totally different."

Most importantly, glufosinate functions primarily as a contact herbicide, killing only those plant parts that the chemical touches. Getting good coverage is thus especially important for Liberty growers, Bohannan said.

Large droplets will miss too much, and tiny ones may drift off target, so look for a happy medium. "We like the upper range of medium droplets, which go up to 300 microns in size, up to the middle range of a coarse droplet, about 400 microns," Bohannan said. "Look at the nozzle chart and determine which type of nozzles, with the operating speed and operating pressure you want to run, produce that droplet size."

Midwestern growers should be aware that glufosinate will react with hard water, Steckel said. To remedy this, Bohannan recommends adding ammonium sulfate (AMS), which can actually help glufosinate translocate better in the plant. "We formulate Liberty with ammonium sulfate, but adding additional AMS gives us an even better advantage if you have dense weeds with a lot of foliage to penetrate and want to improve translocation," he said.

Avoid spraying in the early morning or late evening hours, when sunlight is limited and the dew is heavy, Steckel added. "Time of day seems to make a big difference on how it works," he said. "From 9 to 5 p.m., you'll get good control. But as the sun goes down, so does the weed control with it."

Finally, keep in mind that Liberty acres are still a minority, especially in the Midwest. Cleaning sprayers out between fields and farms this year will be crucial, Albert said. "We've placed a sign at every field entrance we have saying these are not glyphosate fields," he said.

Steckel and Bohannan are hammering home the need for responsible stewardship of Liberty this year.

Once a weed population develops resistance to an herbicide, that tool is gone forever. "Darwin's theory always wins in the end," Steckel said. "I don't think we can keep glufosinate-resistance at bay, but we can delay it."

Start with broad-spectrum pre-emergence herbicides and a timely Liberty application as soon as the weeds break through, Bohannan said. "When the label says 4 inches, it doesn't mean 4 inches taller than your crop, it means 4 inches from the soil to the top of the weed," he quipped.

If weather or other factors delay that first Liberty application, add a residual to the tank, Bohannan added. "If you don't, you'll have to spray a second shot of Liberty later, which will cost more," he warned.

Steckel and his Southern weed scientist colleagues are strongly recommending that growers tank-mix Liberty with a PPO-herbicide like Flexstar or Cobra. "Then Liberty hits the PPO-resistant pigweed and the PPO will control the rare individuals that might be resistant to Liberty," he said.

Liberty works quickly, and so should you, Bohannan said. "You will know in three to four days whether Liberty worked," he said. "So scout early and after a seven-day interval, be prepared to make another application of something if you have weed escapes."

Those weed-ravaged fields from last summer have given Albert a new perspective on Liberty management going forward.

"I'll never forget walking some of these fields and seeing the weed pressure I did," he said. "We need to make sure we don't abuse this technology, too, or we'll back ourselves into a corner just like glyphosate." 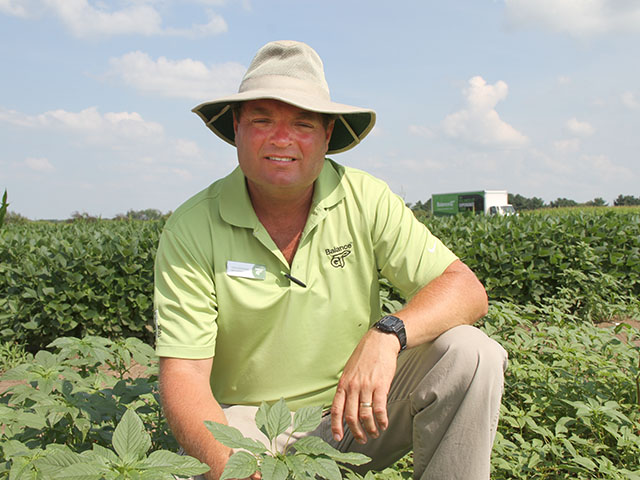