ROCKVILLE, Md. (DTN) -- University of Tennessee weed scientist Larry Steckel has spent the past two months coaxing Palmer amaranth weeds to grow from seed collected in 2019 -- so he could try to kill them.

But after a labeled rate of the dicamba herbicide XtendiMax on two-inch tall weeds, in the well-controlled environment of a greenhouse, a lot of that pigweed did not die.

This week, Steckel made a series of grim phone calls he had been bracing for all winter.

"I called the farmers and retailers who found some of these and I told them -- dicamba isn't going to control Palmer amaranth in these fields anymore," he said. "They were not surprised at all."

His colleague, University of Arkansas weed scientist Jason Norsworthy has found the same thing in his greenhouses with samples of Palmer amaranth from Tennessee, which saw widespread reports of dicamba performance failures in 2019.

Norsworthy said some of the Tennessee pigweed populations start to recover four to five days after an application of a half-pound-rate of dicamba. "They resume active growth, and 14 to 21 days after application, there appears to be little symptomology present from auxin herbicide," he explained.

"Just as we expected, further research is confirming that dicamba is in the initial stages of failure against Palmer amaranth," Norsworthy concluded.

The scientists stopped short of calling it official resistance, as more testing lies ahead.

"Before I can say the "r" word, we have to run dose response tests to show how these populations differ in sensitivity compared to susceptible weeds," Norsworthy said. "But when you spray one population with dicamba and everything is dead, and you spray another with the same thing and 50% are still alive -- I think we know what we're looking at."

Dicamba-resistant Palmer amaranth isn't entirely new. Kansas State scientists confirmed dicamba- and 2,4-D-resistant populations in the spring of 2019. But those were from long-term conservation tillage plots, where weeds had been regularly exposed to dicamba and 2,4-D for 45 years.

That rapid scale-up from 2 million acres in 2016 meant the risk of dicamba-resistant weeds was always going to be high, scientists noted. "We've been almost 100% Xtend [cotton and soybean] acreage for a couple years now, so this isn't a surprise," Steckel said of Tennessee growers.

The United Soybean Board is funding a multi-state effort to test various species of weeds for resistance to the new herbicide-tolerant platforms emerging, including glufosinate and dicamba. Missouri scientists are testing waterhemp for resistance and Indiana scientists are testing marestail. Norsworthy is in charge of testing suspected resistant Palmer amaranth plants and he is working through samples from many states such as Arkansas, Illinois, Missouri, Mississippi and Tennessee.

Steckel said he will advise Tennessee growers this summer not to expect full control of Palmer amaranth weeds in all their Xtend fields.

In Xtend cotton fields, growers will have the option to use glufosinate to knock back dicamba weed escapes, but Xtend soybean growers may need to brace for a second round of dicamba, he said. Enlist E3 soybean fields, which are expected to join the landscape in greater number in 2020, will have the secondary option of glufosinate, as well as 2,4-D, he added.

Weed scientists will need to conduct more tests to see if the populations they are seeing survive dicamba will also tolerate 2,4-D, which is from the same class of chemicals and behaves very similarly, Steckel said.

"That is something we have to test this summer -- if pigweed is resistant to dicamba, will 2,4-D still be effective?" he said. 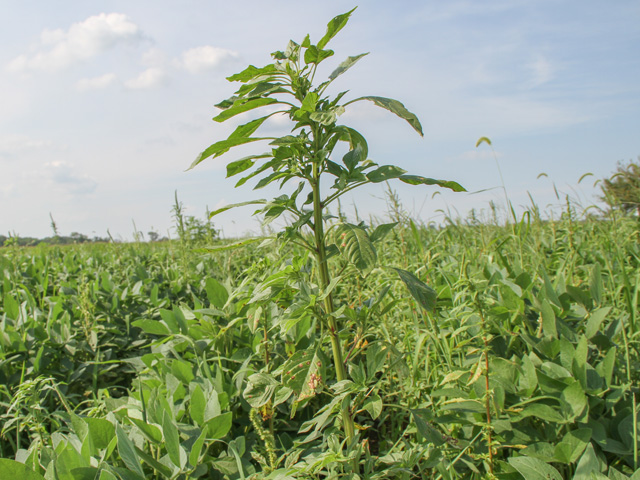