Secretary of State Mike Pompeo and Secretary of Agriculture Sonny Perdue each recorded messages as part of announcing Lal as laureate.

The World Food Prize was created in 1986 to honor Iowa native and Nobel Prize recipient Norman Borlaug. The event typically is announced live in Washington, D.C., at the Secretary of State's office, but was instead held online because of the coronavirus pandemic.

"The world's population continues to grow, and we need to use the resources we have more productively and efficiently to make sure everyone has enough food on their table," Pompeo said. "Dr. Lal's research in soil science shows that the solution to this problem is right under our feet. He's helping the earth's estimated 500 million small farmers be faithful stewards of their land though improved management, less soil degradation, and the recycling of nutrients. The billions of people who depend on these farms stand to benefit greatly from his work."

Lal, 76, grew up in northern India on a seven-acre farm but credits his older siblings for working the farm, which allowed him the chance to attend school. Professionally, he started working in 1963 analyzing low corn crop production in India. Lal worked on soil health restoration in Africa, Asia and Latin America over the past five decades. He has been on faculty for 33 years at Ohio State University's College of Food, Agricultural and Environmental Sciences. Lal's work has helped reduce deforestation, control soil erosion and build organic carbon in the soil.

"Every year we are astounded by the quality of nominations for the Prize, but Dr. Lal's stellar work on management and conservation of agriculture's most cherished natural resource, the soil, set him apart," said Gebisa Ejeta, chair of the World Food Prize Selection Committee, and 2009 recipient of the award.

Lal co-wrote papers in the 1990s showing how restoring degraded soils can extract carbon dioxide from the air to not only improve the soil but also offset rising greenhouse-gas emissions. Lal's work has focused on eliminating tillage and retaining crop residue on the ground after harvest, as well as planting cover crops and reducing the use of chemical fertilizers.

Lal has spent decades looking at soil-carbon models. He said research has shown that it would take roughly $16 an acre sequestering carbon to get synergy among farmers. "If you want farmers to adopt these practices, that's what it cost," Lal said last fall at the World Food Prize Symposium in Des Moines.

Lal also has repeatedly pointed out that soils are often lost in policy protections. The federal government has a Clean Air Act and Clean Water Act, but Lal said more needs to be done to protect soils from contamination and provide more incentives to improve soil quality nationally. "There is no Healthy Soils act, none whatsoever," Lal said last year, adding it's time to act on such an initiative.

Still, policymakers and other institutions continue to debate those practices and the benefits of reducing emissions through carbon sequestration. A group of senators last week introduced legislation that would help farmers meet standards for a carbon market. The World Resources Institute in May released a report arguing that increasing carbon sequestration in the soil has limited potential for reducing greenhouse-gas emissions. The report called the benefits uncertain and stated carbon accounting can be faulty.

Lal will be recognized at the Borlaug Dialogues and World Food Prize Symposium this fall in Des Moines. Lal will be awarded $250,000 as this year's laureate. 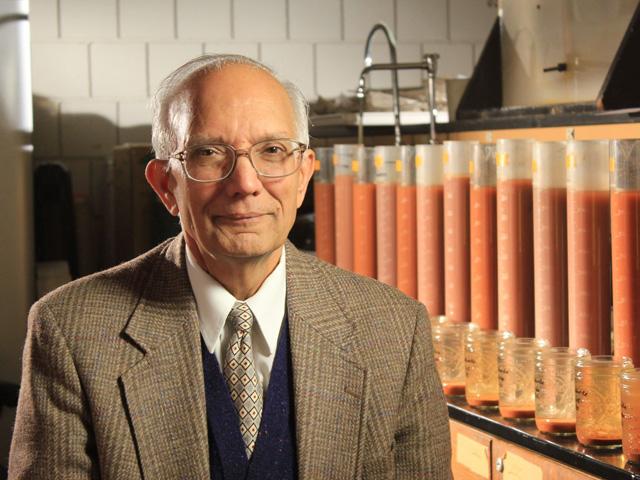