ANKENY, Iowa (DTN) -- Waterhemp, as it turns out, has a savings account.

Last fall, University of Missouri weed scientists tested a harvest system that chews up weeds to keep them from depositing seed. It worked remarkably well -- destroying or damaging at least 98% of the waterhemp seed to the extent that they weren't expected to germinate.

Yet, those same scientists found no significant reduction in the amount of waterhemp that emerged this spring. It seems most of the fields had enough seed stashed away that it will take a few years to winnow down the reserves.

The weed seed banks, at least at three test locations, were probably too large for the one-year withdrawals to have an effect, Bradley said. He wasn't totally surprised by the results of the first year.

"It makes sense the sites with high waterhemp counts have a lot of seed in the soil that will eventually work its way out and grow," he added. "It will take longer for the (terminator) to make a difference. Probably a few years."

Waterhemp is a prolific seed producer, but the good news is controlled seed bank studies by several universities show that seed viability declines fairly rapidly within three to four years.

The Missouri test plots ranged from 40 to 60 acres in size. The university researchers counted waterhemp plants found at each site this spring and compared totals to 2019 pre-harvest counts. The multi-year study, which started last year, is co-led by graduate student Travis Winans.

The fact that one site had a "significant reduction" in waterhemp stands this spring indicates the field likely had the lowest weed seed bank and the destructor is effective, Bradley said. He isn't releasing exact figures at this time since there is still "more data analysis" to do.

"Presumably, if we use the terminator in the same fields year after year, we would see less weed emergence because we're depleting the seed bank," Bradley said. "We believe that will be something that occurs over time. We saw that in the one field, which probably had a smaller weed seed bank, and significantly less waterhemp emerged in it this year."

A second year of pre-harvest and spring waterhemp counts after terminator use will further determine its effectiveness. Researchers also plan to take soil samples at each test site to determine the density of weed seed banks, which can determine if they are being reduced.

The Seed Terminator pulverizes plants and weed seeds with dual hammer mills after the threshing process. The concept was developed in Australia as a tool to help manage herbicide-resistant weeds.

Although not widely used in the United States, several universities have been testing the Seed Terminator unit, and similar concepts, to see if they might be useful in combination with chemical and non-chemical weed-control efforts to tackle herbicide resistance issues.

One of the Missouri test fields belongs to Paul Garrett, who farms near Columbia. Waterhemp is enough of a worry that he's interested in purchasing a Seed Terminator in order to keep herbicide-resistant weeds in check and fields productive. He offered one of his soybean fields as a test site to determine if the machine is worth the nearly $80,000 price tag.

Garrett's field happened to be the one that had a significant reduction in waterhemp emergence.

"That (40-acre) section of field isn't nearly as green with waterhemp as normal," said Garrett, who recently planted Enlist E3 soybeans in the plot. It was also planted to soybeans last year.

Due to less weed pressure in the test area, Garrett hopes he can considerably cut postemergence spraying and preserve available herbicide technologies.

"It will be interesting to see how it works this year, but I think it will truly take three years before you know how it's working," Garrett added.

For more information on the biology and seed production of waterhemp: 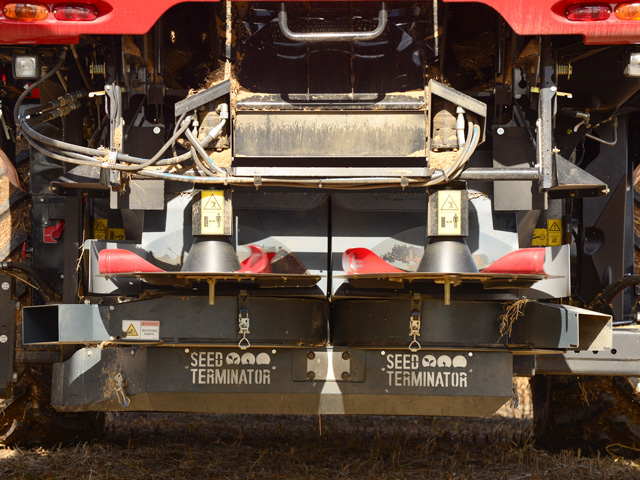