ANKENY, Iowa (DTN) -- It was judgement day last fall for waterhemp weed seeds on Paul Garrett's farm near Columbia, Missouri. Most of the weed seeds were terminated.

The Seed Terminator, a weed seed destructor attached to a Case-IH 8250 combine, was merciless on waterhemp that stood among soybeans being harvested as part of a University of Missouri research study on non-chemical weed control options. The terminator's dual hammer mills pulverized plants, which included weed seeds, after the threshing process.

This spring and summer will tell more about escapees from this project designed to explore the efficacy of machines crushing seeds of some of the toughest to control weeds. Seed destruction has been a popular weed control tactic in Australia, but not widely used in the United States.

Unlike Arnold Schwarzenegger's character in "The Terminator" who is virtually indestructible, weed seeds are not. Test results indicate 98.7% of the waterhemp seeds that entered and got spit out the back of the combine in the 40-acre test plot were destroyed or damaged to the point they likely won't germinate this spring.

"We will find out shortly as it warms up [and weeds germinate] how good it really did," Garrett said. "I believe this product will work. I think in three years of use you would likely notice a drastic reduction [in weed pressure]."

Initial results indicate the Seed Terminator could be an effective tool to combat herbicide-resistant weeds, according to Kevin Bradley, University of Missouri weed scientist.

The terminator was tested on four waterhemp-infested fields, ranging from 40 to 60 acres, in central Missouri. Besides Garrett's Boone County farm, results are in from one other location in Montgomery County. The waterhemp seed damage rate was 98.6%. Seed destruction wasn't evaluated for other weeds in the fields.

"If you get something that keeps nearly 99% of weed seeds that enter a combine from going back in the soil and consistently works well, it will be very useful," Bradley said.

Waterhemp is among the toughest, having shown the ability to outwit seven herbicide sites of action. It is also a prolific seed producer. Although seed destruction tactics appear to be very effective, Bradley noted that not every weed seed makes it into the combine. There's also the risk that over reliance on mechanical tools could eventually cause weeds to change behavior and become resistant to mechanical control.

It will take a combination of chemical and mechanical tools to reduce weed seed banks and make weed control more cost-effective and manageable again, Bradley said.

Another Australian-developed seed destruction tool called the Integrated Harrington Seed Destructor (iHSD) is being tested at the University of Arkansas. Like the Seed Terminator, it is designed to pulverize weed seeds before they hit the ground.

Tom Barber, a University of Arkansas weed scientist, reports seed destruction percentages with the iHSD to be similar to those found in Missouri tests on a variety of weeds, including Palmer amaranth.

"We're running out of weed-control tools and our answers in the next few years won't come out of a jug," Barber said. "It will take a systems approach going forward."

Garrett went from spending $15 per acre to control weeds in soybeans when glyphosate was effective to more than $50 per acre, and he still has weed issues.

"What we have isn't working," Garrett admitted. "I see this as another alternative to control weeds (and cost) in the future."

"The machines are mostly used in wheat to destroy ryegrass seed in Australia, and in very dry conditions," Bradley said. "We're testing on pigweed species in soybeans in the Midwest and mid-South, which is a whole different situation with the amount of green plant material and moisture."

Some re-engineering to increase airflow, increasing mill speed and finding the right screen combination did the trick on the Seed Terminator, according to Bradley. Still, more work is needed to make the machine work efficiently in high-moisture areas that don't always have the benefit of a drying, killing frost before harvest.

"We'll continue to work on it this year," Bradley added.

Similar re-engineering and changes helped lessen clogging issues in the Harrington, Barber stated. But more work is needed, including studying how the use of desiccants can help by promoting leaf drop and reducing material moving through the machine at harvest

There are about 150 Seed Terminators in action worldwide. Three are currently operating in the U.S. -- two on farms and the University of Missouri's test unit.

"Herbicide resistance and the threat of herbicides being taken off the market is real (worldwide)," Berry said. "It was apparent to many Australian farmers they needed to use other measures to control weeds.

"My vision for the U.S. is no different," he continued. "To me, it makes no sense to let viable weed seeds leave the back of the combine."

The terminator unit is designed to fit on any combine and costs about $77,000 installed in the U.S., according to Berry. The price will fluctuate with the exchange rate.

Bradley's 2019 research of the Seed Terminator shows an increase in combine engine load of approximately 15% to 30% when engaged. Fuel consumption can increase by as much as 4 to 8 gallons per hour. Combine speed was marginally affected, if any.

Garrett, who farms 2,500 acres, would like to buy the terminator provided by the company to the University of Missouri when testing is done. His only issue with it is the noise. "It sounds like a high-pitched turbine."

"Even at 70 years old, I'm interested," Garrett said. "That's how positive I am this product will work." 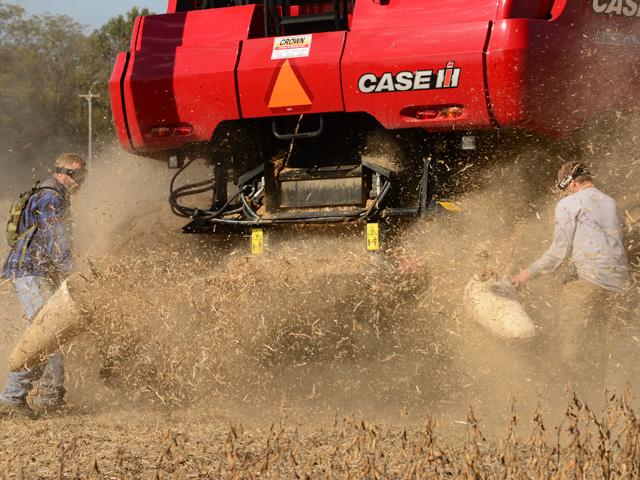