ROCKVILLE, Md. (DTN) -- It was 48 degrees and misting, with low, thick cloud cover and a freezing forecast ahead as Brad Wade piloted a semi down the road this week in central Illinois.

Unfortunately, the actual date was May 5, and the McLean, Illinois, farmer had rows of freshly emerged soybeans on his mind. As early planting proponents, the Wades planted an experimental soybean plot on March 6, and most of the rest of their bean acres went in by April 10.

Stands look great so far, but an untimely cold snap forecast for this week could threaten their fields, as well as other newly planted corn and soybean acres, and some winter wheat fields in the Midwest.

The coldest temperatures, which could drop below 30 degrees, will likely stay limited to the northern edge of the Great Plains and Midwest, from northern Nebraska through southern Wisconsin and up, said DTN Senior Ag Meteorologist Bryce Anderson.

See more on the weather ahead from DTN here: https://www.dtnpf.com/…

THE STATE OF THE CROPS

The May cold snap comes at a time when planting in the upper Midwest has surged ahead of the five-year average. According to USDA's NASS crop progress estimates, soybean planting was 31% complete in Wade's home state of Illinois on Monday, more than twice the average rate, and Wisconsin farmers set a record for soybean planting in a single week last week. In Minnesota, soybeans were 35% planted, the fastest planting rate for the state since records started in 1963. At 46%, Iowa's soybean planting rate also set a state record.

Corn planting is also well ahead of the average pace, with Iowa at 78% planted, Minnesota at 76%, Wisconsin at 33%, and Illinois at 56%. Winter wheat maturity ranges by geography. In more northern Midwest states such as Michigan and Wisconsin, wheat fields are still mostly in the more freeze-tolerant stages of tillering and jointing. But some fields are moving into the more vulnerable boot and heading stages farther south in states such as Illinois and Indiana.

The good news is that once newly planted seeds get past their imbibitional period -- where the seed rapidly intakes water from the soil -- they can stay fairly safe from chilled soil temperatures, agronomists told DTN. For soybeans, that's around 24 hours after planting; for corn, closer to 48 hours.

Moreover, young corn fields are generally resilient to freeze damage through the V4 growth stage, as the growing point remains tucked below the soil line until V5, as Purdue University corn agronomist Bob Nielsen explains in this article: https://www.agry.purdue.edu/….

Temperatures that drop to 30 degrees can damage above-ground leaf tissue, but plants should recover, Nielson noted in another article on frost damage to corn: https://www.agry.purdue.edu/….

When temperatures slide below 28 degrees for several hours, the cold air can be deadlier, particularly if dry soils allow cold air to travel through the seedbed faster and damage the corn plant's growing point, Nielson wrote.

The first thing to emerge from a soybean seed are the cotyledons, closed tightly together like hands clasped in prayer -- a suitable metaphor, as they guard the plant's all-important growing point within them.

"As long as the cotyledons are closed, they provide a modicum of resistance to cold," explained Jim Specht, a University of Nebraska Emeritus soybean agronomist. It can take several hours of temperatures below 31 degrees at the soil surface for the cold to fully penetrate the cotyledon's protective barrier, Specht said.

"And remember that ground temperature doesn't change as fast as the air temperature," he added, so temperature readings taken 10 feet above the ground won't tell you exactly how your seedlings are faring.

Once the cotyledons open up to reveal the plant's first true leaves, the unifoliates, freeze damage can occur more rapidly, Specht said. "When that happens, it exposes the first true leaves to colder air temperatures, and they can freeze," he said, especially if temperatures plunge below 31 degrees for several hours at the soil level.

If the cold air kills the unifoliates, the cotyledons can rise to the occasion and generate two branches that can become replacement stems for the plant, Specht said.

But if the cold seeps deep into the plant and kills off the hypocotyl, the stem below the cotyledons, the game is over.

"Then you're done for," Specht said. "That knocks out the stem and all the nodes. The plant will be limp and blackish and waterlogged within 48 hours."

Wheat fields are fairly tolerant to freezing temperatures before the boot stage, at which point temperatures of 28 degrees or lower can cause damage and yield loss, according to Kansas State's wheat freeze chart, found here: https://bookstore.ksre.ksu.edu/….

Once wheat plants head into the heading and flowering stages, exposure to 30 degrees for two hours or more can cause damage, however. Wheat plants in the tillering to jointing stages, such as most of Wisconsin's wheat fields, are likely safe from the cold snap, as University of Wisconsin Soybean and Small Grain Specialist Shawn Conley noted in this university update: https://coolbean.info/….

Wade's soybeans have already beaten a lot of odds. The March 6 batch took seven weeks to emerge, as they waited out eight inches of rain, several inches of snow and many bouts of freezing temperatures.

But they inched out of the ground at roughly the same time as his April-planted beans and were on their way to validating the Wades' push for early bean planting. "We're big believers in early planting to get more nodes on the plant before the summer solstice and start flowering in early June, which has just led to higher and higher yields for us," Wade said.

The cold temperatures ahead will be their biggest hurdle yet, however. Forecasts for central Illinois show the early morning hours of Saturday dipping as low as 32 degrees.

"We'll be right on the knife's edge," Wade admits. "We'll know what happened by Monday."

For help assessing frost or freeze injury to soybeans, see this guide from the University of Minnesota: https://extension.umn.edu/…

And, should it come to it, University of Wisconsin soybean agronomist Shawn Conley has a soybean replanting guide here: https://coolbean.info/… 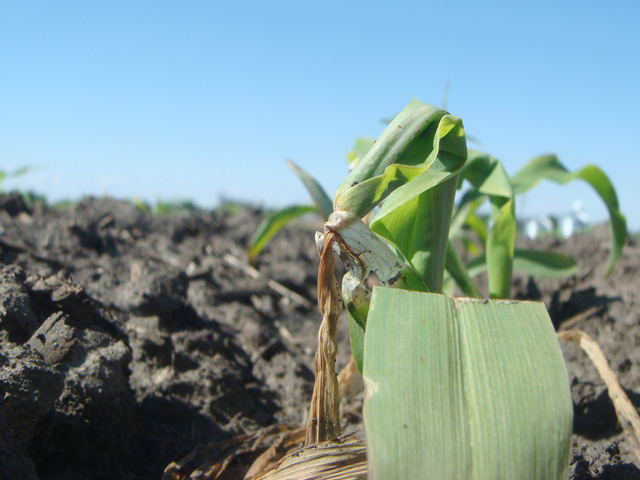