OMAHA (DTN) -- After years of promotion by the United Soybean Board, champions of high oleic soybeans are still waiting for acreage, production and end-uses to break out.

Since 2013, the United Soybean Board (USB) has invested at least $62 million to help build both demand and acreage for high oleic soybeans, including $20 million in fiscal-year 2019 for a "demand pull stimulus," for the beans.

High oleic soybeans are the food-grade hope for the industry to recover from demand lost when the Food and Drug Administration pushed to phase out trans fats through labeling. The food industry began aggressively importing palm oil and switched heavily to canola oil. But high oleic beans offer levels of oleic acid comparable to competitors such as canola, sunflower and olive oils. The question remains whether soybeans can take back some of that lost market share, and reduce imports of palm and canola oils.

"High oleic offers us the opportunity to take back a significant portion of that over time," said John Jansen, vice president of strategy for the United Soybean Board, in an interview with DTN last month. "We would estimate we have the potential to displace somewhere in the range of 50% of that by 2025."

In 2013, USB officials cited that without major checkoff investment, high oleic beans might only account for 5% of acres in 2020. Last year, that would have translated to about 3.8 million high oleic acres planted; however, high oleic beans were only planted on roughly 500,000 acres nationally in 2019.

Jansen doesn't think acceptance of high oleic oil is a problem in the food industry, even if the acreage growth has been off-target so far.

"There has been a lot of interest in high oleic from both an end user, food-processing segment, as well as industrial," Jansen said.

FEWER ACRES BECAUSE OF WEATHER

Growth slowed last year, in part because some of the major growing areas in Indiana and Ohio suffered heavily with wet planting seasons and logged prevented-planting acres. Fewer high oleic acres were contracted in those areas last year and Jansen said ideally there will be some recovery in 2020. "We had people who wanted the product and just couldn't get it. It was a real high risk-reward situation," Jansen said.

In January, USB issued two press releases championing production opportunities for high oleic soybeans, including a list of grain elevators in Indiana and Ohio that will contract with farmers for both harvest delivery and on-farm storage for the 2020 season. A similar news release championed high oleic soybean contracts in the Delmarva region. Both releases stated high oleic beans "earn an average premium of 50 cents per bushel."

Acreage targets this year got a boost when Minnesota-based Calyxt announced last week it had reached its contract target of 100,000 acres in the upper Midwest, jumping from 36,000 planted acres last year. Calyxt has a goal of doubling its contracted soybean acreage annually.

Calyxt, a public company headquartered out of Roseville, Minnesota, focuses on using breeding technology to grow healthier food products, and is investing heavily in expanding sales of non-GMO, high oleic oils. Last year, Calyxt was largely focused on growers in Minnesota and South Dakota. The company this year is launching five new varieties of non-GMO high oleic varieties to expand its growing area in Iowa, Minnesota, Nebraska, North Dakota and South Dakota and has been working with three new agronomy partners to sign up growers. As of last month, Calyxt had 11 delivery points set up in those states to buy back 100% of those producers' high oleic crops.

Keith Blanks, Calyxt's senior vice president of sales and marketing, said high oleic soybean oil is showing some strong performance attributes for end users, such as being a stable product for the baking and confectionary industries that can extend shelf life of products. Just as importantly, the oil has a clean, neutral taste, Blanks said. Further, the oil has performed well for restaurants.

"The oil fries two to three times longer than commodity products because of its fatty-acid profile and its genetics," Blanks said. "So that's really attractive for a restaurant operator."

Blanks added, "We expect a pretty bullish forecast and that's why we continue to add acres."

In Indiana, Kevin Wilson, a USB director, has been growing Plenish soybeans for the past six years and will grow them again this spring. Wilson noted one of the issues last year was the wet spring, but he thinks Plenish will continue to see expanded acres in the coming years.

"I think we're starting to see a lot more interest in the high oleic oil itself and that's something that has been kind of a challenge over the past few years," Wilson said. "We have got some people on board now in the marketplace who have taken a look at it and seem pretty satisfied."

Wilson said one of the challenges with expanding acreage is the only herbicide trait for Plenish seeds is the glyphosate-tolerant Roundup Ready 2, but more farmers are switching to other herbicide traits and options.

"I think that might be one of the challenges over the next year or two," Wilson said.

Pesticide drift is one of the issues farmers have to consider with varieties such as Plenish and Calyxt seeds, which are a non-GMO product. Both varieties would be susceptible to herbicide drift, especially as dicamba- and 2,4-D-tolerant acres expand across soybean states.

Vince Restucci, vice president of agronomy services at Calyxt, runs the grower relationship team at Calyxt, said he has heard more comments and questions about that issue. "There is a heightened level of concern in South Dakota," Restucci said.

Jansen said growth has been slowed somewhat by food processors that have already had to change labels multiple times over health claims, and want to minimize label changes. Food companies also go through extensive taste tests before making any kind of ingredient change.

"They are extremely careful to ensure their end users don't see any kind of particular difference in the quality, visual or flavor of their products," Jensen said.

At the end of January, USB began reaching out to 300 marketing executives for some the largest end users for food ingredients to promote the health and sustainability aspects of high oleic soy. One strong marketing pitch for U.S. soy over imported palm oil comes from the negative environmental footprint of palm oil due to deforestation and displacing indigenous tribes in major production areas such as Indonesia.

"The marketing folks see the full benefit of what the consumers are focusing on right now, which is sustainability, traceability, identifying where their food comes from, understanding that this food is domestic and not coming from half a world away," Jansen said. "We can certainly say for U.S. soy, it is not deforesting, or tied to slave labor, or indigenous people displacement."

While high oleic soybeans are touted for their food uses, USB also has been partnering with companies to test high oleic oil as a way to replace petroleum products. Soybean oil is already used as a lubricant in the asphalt industry, but the high oleic oil can boost the volume of recycled asphalt that can be reclaimed and put back into roads. Jansen said that holds the potential for as much as 1 billion pounds of oil demand.

"This is an opportunity really to make a difference," he said. 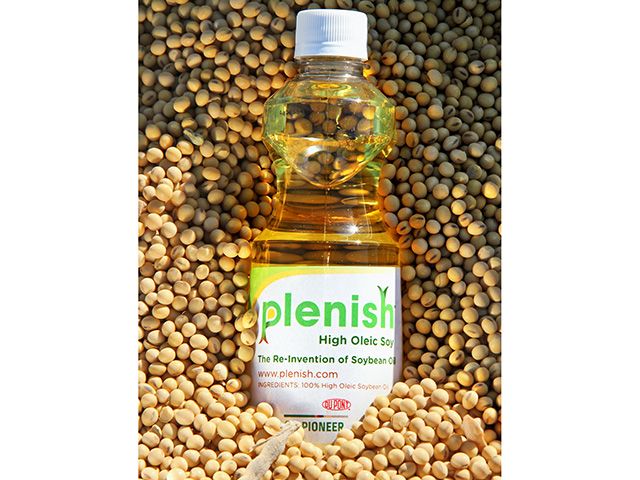