SAVANNAH, Ga. (DTN) -- Due to possible increased global potash shipments in 2020, new projects being delayed and producers cutting back on output, a bullish scenario could play out with potash prices bottoming out and then moving up moderately.

However, a separate bearish scenario could also occur with less-than-expected global shipments and more supply coming into the market, thus causing the downward price trends to continue.

Mike Rahm, founder of Mike R. Rahm Consulting LLC, said in the potash outlook at the 2019 Fertilizer Outlook and Technology Conference held in mid-November in Savannah, Georgia, that either outlook could be seen in 2020. He said the bullish scenario has a 60% chance of happening, while the bearish outlook has a 40% chance.

Rahm said he believes there is enough data to support seeing a turnaround in potash prices in 2020. For this to occur, global shipments will have to rebound sharply in the new year, new production will have to start up later and potash producers will need to throttle back output.

"I think it's reasonable to think with stability and some improvement this situation could happen," Rahm said.

The bullish scenario assumes that global shipments will rebound to a record 68 million metric tons (mmt) to 69 mmt in 2020. This would be a drawdown of both channel and producer inventories by the end of 2019, as well as positive on-farm demand prospects, he said.

There are several signs in the world market that support the bullish potash situation.

Rahm said one would be the recent settlement of Indian contracts at a price slightly greater than expected. This would be due to strong on-farm demand following an outstanding monsoon, as well as lean channel inventories, he said.

China could also factor positively in this argument. While there were record port potash inventories of 3.7 mmt at the end of October, most analysts see scant stocks farther down the distribution channel at plants in the country.

The global potash market will most likely survive without a Chinese contract settlement, which probably won't occur until late in the first quarter of 2020, he said.

In addition, Rahm said potash producer stocks are expected to fall, following cutbacks of 3.2 mmt to 3.5 mmt during the second half of 2019. Stocks typically drop significantly during the third quarter as a result of normal turnaround schedules, he said.

"The continued expansion of soybean and safrinha corn areas and profitable farm economics are the key demand drivers in 2020-21," Rahm said.

In addition, U.S. farmers are also getting financial help from the Market Facilitation Program (MFP), which can be "a decent amount."

In the bearish scenario, global potash shipments would rebound less than expected in 2020, Rahm said. In this situation, shipments would stay at around 68 mmt in 2020, which was about where the number was for 2019.

Record shipments in both 2017 and 2018 resulted in a large build-up of channel inventories. Distributors with lean inventories at the end of 2016 positioned large quantities of product during the rising market, he said.

North American producer stocks have increased in the first half of 2019, he said. A record 5 mmt of inventory at both on- and off-site warehouses were seen during this time. The extremely late and disappointing domestic spring application season coupled with a slowdown in offshore sales resulted in no decline in inventories during Q2 2019, he said.

"(Market) bears characterize some of the cutbacks as just bringing forward normal mine and mill maintenance and expect that excess supplies will continue to overhang the market in 2020," Rahm said.

Another factor that would affect global shipments of potash would be cautious on-farm demand from farmers. Rahm said lower commodity prices could push some farmers to skip some potash applications.

The bearish scenario could emerge if more soybean acres are planted in the U.S. This, too, could lessen applications, he said. 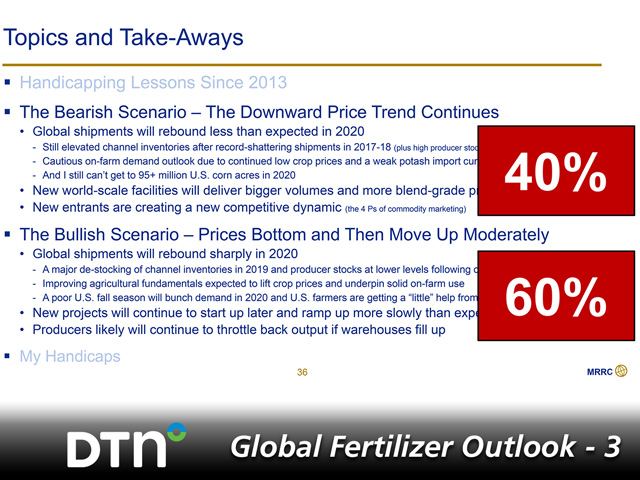