Under a darkening sky during the latest rain, Perry Galloway stood alongside a healthy corn crop.

The Gregory, Arkansas, grower and aerial applicator was pleased with what he saw even though plants that were 8 feet tall in mid-July would normally be several feet taller. Persistent precipitation slowed crop progress.

Galloway's game plan doesn't change, though. He said ensuring corn is healthy during the V3 to V8 growth stages provides the best opportunity for big yields at harvest.

"It's critical during the first 60 days to ensure the corn plant is healthy in terms of proper nutrition—N [nitrogen], P [phosphorus] and K [potassium] along with micronutrients, sulfur, magnesium, zinc, boron -- to set the plant up to establish the largest ears," Galloway explained. "It's a numbers game. The more rows around and the longer the rows, the more kernels you'll make. And, hopefully, those kernels will be heavy and translate to high yields."

Galloway concluded V4 is when the rows around an ear are established. V8 is when ear length is established.

The row-crop farmer believes the V2 or V3 growth stages are when corn ear ridges are formed and ultimately split into rows. An ear has an even number of rows -- seven splits to 14, eight to 16, 10 to 20, etc.

"So, we're looking for the maximum number of rows around and maximum length," Galloway continued. "Usually, on a regular production field, I end up with 36 to 40 kernels long. If I have 16 rows around and 38 healthy kernels -- with a plant population of about 34,000 plants per acre -- that'll equate to around a 225- to 250-bushel corn crop. I don't hit 260 bushels every time, but that's what I'm aiming for."

This is the last of five stories in DTN/Progressive Farmer's Stand Strong series. Optimizing yields on every acre requires getting corn off to a fast start and establishing a sturdy stand. Stories in this series offered tips to strengthen standability.

"We always say, 'To reach maximum yield, corn can't have a bad day in its life.' That's somewhat true," Kelley said. "But, obviously, there are management factors that impact yield, such as planting date, obtaining optimum stands and drainage in combination with timely applied inputs at the V3 to V6 stage to reach top yields."

The V3 to V6 time frame is when most sidedress nitrogen fertilizer is applied, Kelley said.

"The plant will be entering the rapid growth period, and having adequate fertility present at this stage is important," he said. "If we're late on fertilizing, it can certainly reduce yield potential. We are always concerned if we're delayed in getting nitrogen out, especially if we did not apply much or any at preplant or at planting. The timeliness of nitrogen application is a very important component to obtaining high yields."

Kelley added zinc and sulfur deficiencies are often observed in the V3 to V6 stages, as well.

"With weed control, there's the same kind of philosophy: We must be timely," he explained. "Typically, our best weed-control programs are two-pass where we start clean with a burndown or tillage pass along with a preemergence herbicide application immediately after planting."

Every year, cutworms can be an issue in some fields. "Fortunately, we generally don't experience a lot of problems," Kelley said. "Stinkbugs are also a pest we see during the V3 to V6 stage at some levels in most fields. We've had fields sprayed for stinkbugs this year."

The early vegetative stages in corn are important, particularly in the South. "Especially in a year like we're having," said Erick Larson, Mississippi State University Extension corn specialist.

"Corn is particularly responsive to the stand it achieves," he concluded. "Stand quality can be jeopardized not only by seedling mortality, but growth disparity and plant spacing may also considerably reduce productivity."

Normally, Mid-South producers use some form of a stale seedbed system, where all primary field prep is done in the fall to enhance the opportunity for early planting in the spring. "The only thing done in springtime is to apply a nonselective burndown herbicide to control winter weeds and, likely, harrow the top of the beds and plant as soon as it dries down," Larson said.

Last fall, farmers didn't have an opportunity to "row up" a lot of land or reestablish raised beds, Larson explained. Many growers had to plant their fields flat, or they hastily put up raised beds in the spring when soils were abundantly moist.

"That could cause more soil compaction, which can limit plant growth and have lasting effects," Larson said. "Corn is a crop that doesn't 'bounce back' very well."

Galloway contends a good corn crop should be established early.

"If you only have, say, 14 rows [on an ear], then you'll need about 44 kernels long to get to the same number of seed as the 16/38 equation," he claimed. "So, it seems to me it's easier to make more rows around than length. Later in the year, you'll think they're all pollinated and filling out, and something happens. It bites you. I don't know if it's sunlight, fertility -- some other sort of stress like lack of moisture or too much -- but the 50-kernel-long corn turns into 35 to 40. It aborts those extra kernels as it's filling out. That's just the physiology of the plant."

Different corn hybrids make more rows around ears, Galloway said. Seed companies should be able to tell customers what a hybrid is capable of.

Since corn appears to be 2 to 3 feet shorter this year because of climatic setbacks and stress, Galloway wondered if ear size and yields will be affected.

"It doesn't appear so; I'm still seeing nice ears," he said. "I've talked to some seed-company guys, and they agree that the ear size seems to still be there. It'll be interesting to see how this plays out." 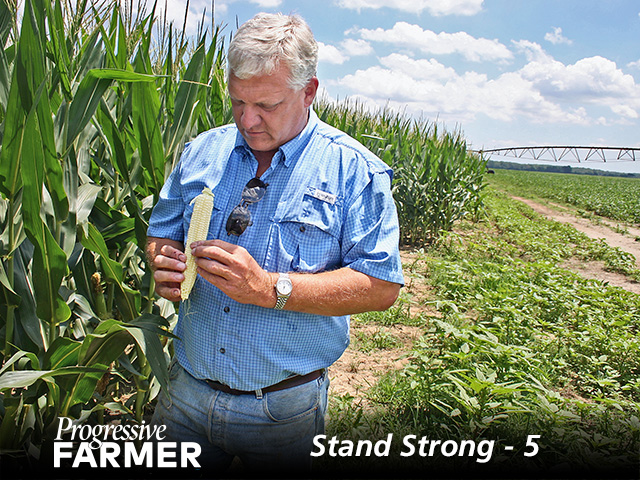