OMAHA (DTN) -- The "Silicon Prairie" is alive and well in Lincoln, Nebraska, which is good news with an ever-increasing world population to feed.

Research at the University of Nebraska-Lincoln (UNL) is pushing the boundaries of precision agriculture. These discoveries could alter the way farmers operate and monitor crops, allowing them to become even more efficient in the future.

James Schnable, assistant professor in the UNL Department of Agronomy and Horticulture, and colleagues from Iowa State University are working on creating sensors that can measure how much water an individual plant is using. This technology is similar to wildly popular personal monitoring systems like Fitbit.

These products utilize wireless-enabled wearable technology devices that measure such things as number of steps walked, heart rate and other personal metrics. These plant-mounted sensors will measure sap flow, according to Schnable.

Sap flow is an important indicator of how much water a plant is using as leaves open pores to allow carbon dioxide in. However, water can be lost in the photosynthesis process. More water lost will ultimately lower yields, he said.

Schnable said measuring sap flow hourly or even minute by minute could help researchers better understand how crops respond to stressful conditions such as drought. This data could not only help plant breeders develop different genetic lines more efficiently, but it could also assure farmers they are applying enough irrigation water to their crops.

Schnable said farmers are using utilizing some sensor technology, such as those gauging how much fertilizer/irrigation water has been applied or needs to be applied. Individual plant sensors would represent another level of this technology.

The challenge in creating stalk-worn sensors are two-fold, he said.

About a year ago, Schnable received an award from the National Science Foundation (NSF) to measure rates of sap flow in real time. He then contacted Liang Dong, a professor of electric engineering at Iowa State, to create a design that could work.

After some brain storming, they came up with a low-cost sensor that could be used in a field setting.

"Dr. Dong came out of the biomedical field, which is why he knows how to build wearable sensors," he said. "We're coming at the same problem from completely different backgrounds."

Schnable said the first sensors will be applied to plants in a UNL greenhouse this December. This setting will allow researchers to double check the data from the sensors by weighing plants and soil to figure out how much water is lost, he said.

If this process works well, the sensors will then be put on plants in small research plots in various research farms in different parts of Nebraska next spring. This will be done to catch drought conditions in at least one location, he said.

As for the future, Schnable said it's difficult to predict if this technology could someday be applied to commercial agriculture. However, the fact both plant breeders and farmers could benefit from this data does lead one to believe this product could have a place in agriculture in the future.

"I think the infrastructure is there for a product like this to be a great value to farmers someday," he said.

Across campus Santosh Pitla, associate professor of advanced machinery systems, and master's grad students have spent four years developing Flex-Ro. Short for Flexible Robot, the device has four wheels and a 60-horsepower Kutoba gas engine weighing about 3,000 pounds, which can be controlled remotely and is capable of being fully autonomous.

The Flex-Ro utilizes a design in which each wheel can be controlled individually, which allows for different types of steering. This spring marks the first time the Flex-Ro has been present in a one-acre plot at the UNL research farm near Mead, Nebraska.

Pitla said the idea behind the Flex-Ro is making the robot as useful as possible. It could help in crop scouting as well as actual operations in crop production, he said.

The device can collect data through onboard sensors used to measure such things as reflectance, plant height, temperature and humidity. Other possible applications include targeted spot spraying or weeding and even planting operations.

"These machines could work 20 hours a day all throughout the growing season looking for problems and then solving the problems," Pitla said.

Pitla said he envisions the machines could be fully autonomous while being supervised by a person. The Flex-Ro has obstacle sensors on it to prevent the robot from running into objects and would need to be trailered to a field, he said.

A supply truck could be parked near the field and a person would still need to be present to load both fuel and seed in a possible two-row planter Flex-Ro. This would still save some labor as just one person will be needed, he said.

Pitla said five Flex-Ro machines could be someday working in a field in five different zones, each programmed to work on a task. The challenge would be if these five machines were all doing different tasks instead of all five doing the same task like planting or spraying.

"Multiple robot systems have to communicate with each other and all doing the same job would be easier to establish while machines accomplishing different tasks would be more challenging," he said.

Pitla believes the Flex-Ro could be a product which, in the future, could aid both researchers with a few acres of plots to farmers with thousands of acres. However, there are some hurdles to overcome, he said.

More testing in real field situations would be needed as the proof of concept would have to be shown, he said. In addition, there is the question of obtaining the funding needed to build these machines.

Still it is an interesting idea with many possibilities, Pitla said.

"We have had a lot of positive feedback," he said. 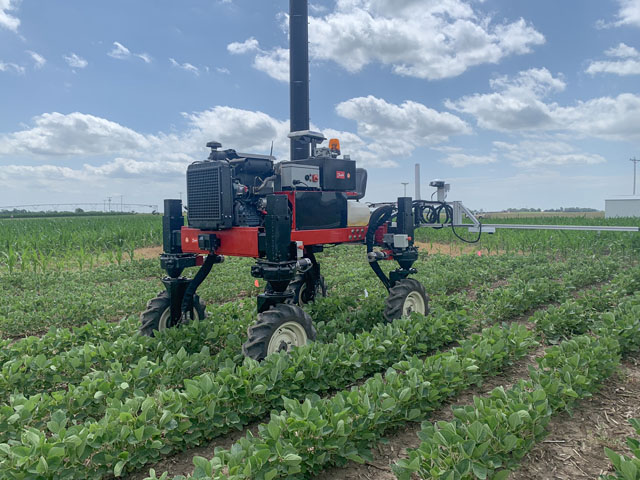