For some farmers, planting was a top priority and fertilizer application was secondary, thanks to the ability to sidedress nitrogen later. Others, however, decided to apply fertilizer all at once and move away from sidedressing because they didn't know when they would be able to get this pass completed.

The result is a wide variation in how much in-season nitrogen application is being done as the corn grows and needs nutrients.

Stephanie Porter, a Golden Harvest agronomist who covers the west-central/central Illinois region, told DTN she expects her area will see more corn acres receiving in-season nitrogen this growing season. The wet weather in the fall limited fertilizer application, and this trend continued through the spring, she said.

In addition, some areas may have lost nitrogen already applied due to denitrification. To be lost this way, nitrogen has to be in the nitrate form and the soils are saturated, something seen often this spring in the state.

Porter said many farmers in west-central Illinois decided to plant corn this spring between the many rains and shifted the majority of fertilizer applications to sidedressing. Some may have gotten nitrogen down in the fall or the spring, but the majority planted when the sun was shining, she said.

"Some farmers were still planting up until recently as well as trying to spray post-herbicide applications and sidedress as well," Porter said. "In some cases, they were trying to hire things out."

Corn was planted in an extremely wide time frame of roughly 55 to 57 days, she estimated.

Porter said there are several things farmers need to consider when they are applying in-season nitrogen. Important factors include what form of nitrogen to apply, the type of equipment to use and whether to use a nitrogen inhibitor.

Generally speaking, liquid nitrogen (UAN solutions) are available to plants more quickly than anhydrous ammonia, Porter said. About 25% of nutrients are available right away with liquid N, whereas anhydrous can take longer to have nutrients available, she said.

He said he believes that split application for corn is a good practice because it allows the plants to better utilize nitrogen since nutrients are applied when the plants want to use it the most. Application can be done any time after planting through tasseling, but adequate nitrogen from V5 to V8 growth stages is important.

"Timing depends on the equipment used," Spelhaug said. "I've had good luck with the 360YC (Yield Center) Y-drops, and many guys use liquid coulter knifes around here with success."

Economics also factor in when considering in-season nitrogen application, as anhydrous is less expensive compared to liquid nitrogen. Considering the amount of nitrogen that might need to be applied in the liquid form, there could be some issues with supply, Porter said.

"There is no magic formula when it comes to applying nitrogen in-season," said Porter, both in terms for the amount of nitrogen as well as the form. "There are tests and models that can be done, which helps some, but in many cases, it comes to down to the economics."

Bob Spratt, manager of LeRoy Fertilizer Services located in LeRoy, Illinois, has been busy sidedressing corn acres for the last couple of weeks now. For the most part, farmers are almost done sidedressing, except for those acres planted very late, he said.

Spratt estimated his overall sidedressing acres are down in his central Illinois region. More nitrogen went on upfront with many farmers canceling their sidedressing operations, a practice popular with many producers in the area, he said.

"It was mostly due to the fear of not getting everything done (sidedressing) and planting taking priority," Spratt said.

While he is a proponent of sidedressing in central Illinois, Spratt said the area is blessed with high-organic-matter (OM) soils with high mineralization and nitrogen-holding capacities. Thus, putting on all the nitrogen upfront isn't as big a penalty as it would seem, he said.

Spratt said, in the area around LeRoy, the corn crop looks to be in pretty good shape considering all of the weather challenges. Other areas of central Illinois appear to be in worse shape, he said.

Farther to the east, farmers in Indiana have also seen extreme weather conditions. Despite the wet conditions, some have decided to stick to their normal fertilizer plans.

Jason Scott, who farms near Burrows, Indiana, said he stuck with his normal application plans this spring despite the wet conditions. He applied preplant nitrogen in the form of anhydrous ammonia on some of his fields with lower-quality soils, and he is set to sidedress his higher-quality-soil acres that were started last week, he said.

About the only change he made was in fields where they had to plant around wet spots. He sprayed these fields with 28%, he said.

"I think it will be normal fertilizer programs for most around here with a lot of it getting sprayed with 28% preplant," Scott said.

The University of Minnesota Extension recently posted an entry in their crop news segment titled "Should you apply nitrogen in-season?" The report can be viewed at: https://blog-crop-news.extension.umn.edu/….

The University of Illinois also recently published a report detailing how to approach nitrogen for the 2019 corn crop. This report can be viewed at: https://farmdocdaily.illinois.edu/…. 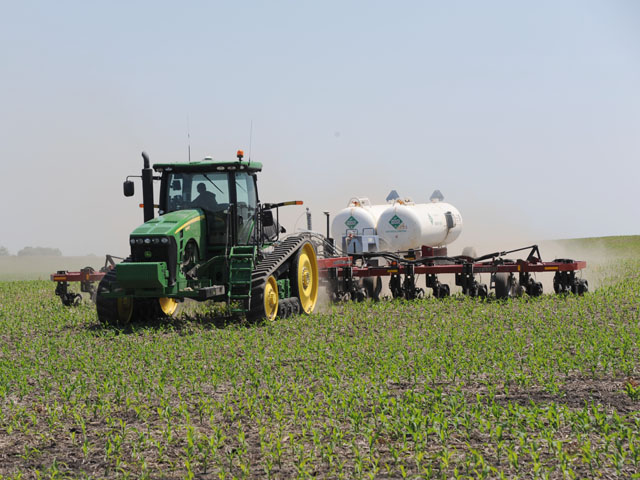