His financial returns are highest on the fields with the most diverse cover crops, cash crops and relay crops. By "relay," he means growing a second crop (soybeans, rye or wheat) in the same growing season.

This diversified soil allows microbes to retain and recycle nutrients, store nutrients and prevent erosion through winter while adding income from cover-crop seed. By comparison, a conventional crop rotation has a "brown winter season" vulnerable to nutrient and soil loss, and the death of beneficial soil microbes.

Fast-forward through 26 years as a dairy, then continuous corn to the past 10 to 12 years of reduced/strip-till/no-till, interseeding and multispecies cover-crop mixes, and a relay crop of soybean, rye or wheat in the same field. His FLOLOfarms won the 2017 Iowa Environmental Award, and his name dominates soil-health forums and meetings. "I've never been conventional," Steinlage said.

Soil resilience is Steinlage's top priority. Why? Soil resilience brings yield stability despite precipitation extremes, said Jerry Hatfield, director of the USDA National Laboratory for Agriculture and the Environment, based in Ames, Iowa.

"We're gearing for feast-or-famine weather patterns," Steinlage said. "We're building our soils with cover crops, diverse crop mixes and no-till. We're erosion-proofing our soils. We had 21 inches of rain in one week the summer of 2017. The neighbors had runoff, but we did not.

"In 2012, we had a big rain the day after planting. I was worried about getting back in to spray the clovers (cover crop). That's why I now band herbicide with the planter -- to give the cash crops an edge." The cost is about $6 per acre. He uses Acuron or combines acetochlor or metolachlor and atrazine. "If we don't disturb the soil, we don't have weed problems," Steinlage added. He customized row cleaners that move residue but not soil.

After 10 years of these practices, a $15-per-acre cover-crop seed investment and diverse species in the same field, his corn yields are 15 bushels per acre ahead of any other fields he farms.

The result of these practices is more soil carbon, the fuel for crops and nutrient recycling. "Liquid carbon is the 'underground currency' that feeds soil microbes," Steinlage said. He explained carbon is what microbes exchange for more plant-available nutrients, which they recycle from residue. (See "The Underground Economy" sidebar farther down.)

The per-acre revenue for ground planted to cereal rye cover crops, cash soybeans and buckwheat cover crops is a minimum of $660, he said. "We can easily double that; I just don't like to promise the moon."

On a test field, Steinlage interseeds a varying "jungle mix" of 17-species combinations of tillage radish, dwarf Essex rape, vetch, buckwheat, phacelia, flax, oats, several clovers and more, depending on the field and rotation. This test field has 15-bushel higher yields than his others on some of the poorest county soils.

GIFTED WITH A WRENCH

Known far and wide for his mechanical creativity, Steinlage has built and modified at least eight cover-crop interseeders in the past 10 years.

When he could afford to build from the ground up, he mounted a Montag dry fertilizer box on a Dalton custom bar, adding customized Dawn DuoSeed row units with a seed sensor that precisely monitors cover-crop seeding rates. This feature is now standard on Dawn's new DuoSeed Pro. Steinlage's interseeder also has Precision Planting monitoring, seed firmers and a wide drop tube for larger seeds. He designed his own row cleaners and rollers. This rig drills fertilizer, soybeans and fall cover-crop seeds, and can sidedress urea at V4 on the same pass based on soil-nitrate test results.

The goal is to have permanent cover and roots between corn and soybean rows. "We were there in 2012, but Mother Nature is a formidable foe," Steinlage said. "Since 2012, our 'yo-yo' springs have killed most covers in March."

A close friend of Steinlage's describes him: "The Steinlage family's on the forefront of redefining the future of crop production and soil-health management, while still recognizing that we need to be profitable," said Jacob Bolson, Hubbard, Iowa. "With the economic, regulatory, public perception and environmental constraints facing farmers, we must be willing to challenge the norm and take strategic risks."

After planting corn or soybeans, Steinlage used to crimp or roll cover crops to terminate them or slow them down ... or he just leaves them if there's no moisture shortage. Why? Because cover crops crowd out weeds and store nutrients that otherwise leach in downpours. Cereal rye's allelopathy is nature's herbicide. Cover crops can also add to soils' carbon levels.

He experiments a lot, including trials with Bob Recker, a retired John Deere engineer and founder of Cedar Valley Innovation, in Waterloo, Iowa. One of many successful tests was 60-inch corn rows with cover-crop mixes in between the rows. Higher corn populations (54,000 per acre) is equal to conventional populations in 30-inch rows; and yields were 230 bushels per acre. The wider rows allow more sunlight to boost corn yields.

Steinlage shut off Rows 2, 5, 8 and 11 on his 12-row planter resulting in a 2-row, skip-1 pattern for this 1-acre plot. He interseeded a mix of buckwheat, oilseed radish, annual ryegrass and dwarf Essex rape at corn's V4 stage. With no yield hit to these "skipped rows," he'll now add livestock to the mix.

"Loran has a unique willingness to experiment with widely varying approaches, accepts that some things will not work and, most importantly, is very open in sharing his results and learning," Recker said.

Most of Steinlage's crop nutrients come from semicomposted dairy manure (traded for crop residue) and N-rich cover crops. Steinlage will borrow sheep to graze his interseeded cover crops in exchange for "Pie Drops" (his version of Y Drops). Free fertility and weed control harken back to farming in the 1950s, he said.

The Steinlages have been 100% controlled traffic since 2009. Equipment is 30 feet wide on 120-inch centers, limiting soil compaction. "I think aerial drone footage will sell the concept: Aerial photos make compaction's impact so evident," he said.

The family has weathered far more than its share of family health crises and accidents. When asked about how stress has swayed his farming decisions, Steinlage said he uses the 100-year rule: "Will this decision be important 100 years from now?" If you're talking about resilient soil, the answer is yes.

Half of soil humus -- what gives healthy soil its structure and smell -- is carbon, Brinton said. Soil microbes may produce CO2 at rates up to 100 pounds per acre per day, the amount required in crop photosynthesis, he added. Crops may get more CO2 from soil than from the air. So, soil carbon is a crops' lifeblood.

The bottom line is resilient soil in wet and dry seasons. Resilience is stable yields over time and less variation within fields, said Jerry Hatfield, director, USDA National Laboratory for Agriculture and the Environment. As rain falls in more concentrated bursts, and droughts hang on longer than before, carbon improves your "factory" -- your soil.

"We need to change our farming practices to be more CO2-oriented," Brinton said. 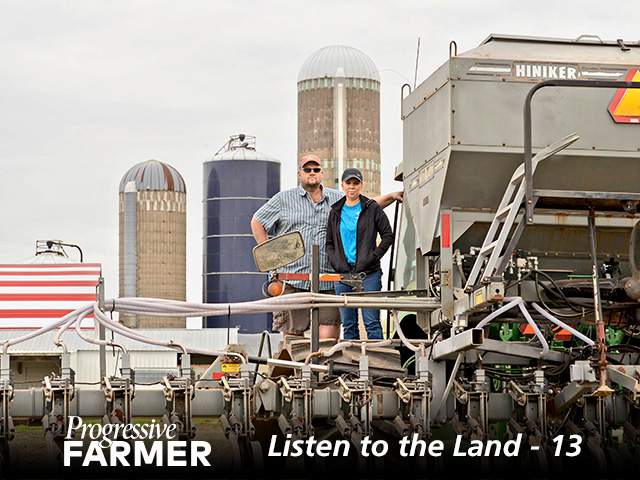