OMAHA (DTN) -- Kim Summers was not a fan of the weather this past growing season. Summers, along with her husband, Mark Brunk, grows and sells forage near Chambersburg, Pennsylvania. They saw the near-constant rains severely limit the amount of hay they could produce.

"We had over 70 inches of precipitation in 2018," Summers told DTN. Normal is around 40 inches. "Normally, we get five to six cuttings; this year we only got two cuttings."

Hay prices climbed last year as supplies were not able to keep up with rising demand, especially in the spring right before livestock was able to graze again. This year, the situation appears to be similar with some demand for high-quality forage, although situations are different regionally, according to those selling hay.

According to the National Weather Service (NWS) in State College, Pennsylvania, most of the state saw increased amounts of precipitation last year.

The amount above normal ranged from 11% to 25% in the northern part of the state, to 51% to 75% in the south. A couple of counties in this area saw greater than 75% above normal precipitation, NWS reported.

DTN Senior Ag Meteorologist Bryce Anderson said the northeastern part of the U.S. "was off the charts" on precipitation last year. Pennsylvania, for instance, was from three to five standard deviations above the 1977-to-2017 average, which in statistics is outrageous precipitation, he said.

Anderson said the forecast this spring is calling for more precipitation for both the Northeast and the Corn Belt. A weak El Nino warm-sea surface temperature pattern is in effect in the Pacific Ocean right now; it's likely to stay through early spring, and El Nino occurrences usually lead to above-normal precipitation, he said.

"It's hard to argue against that trend being on deck for spring 2019," Anderson said.

Summers farms in the south-central part of Pennsylvania, the region that saw much more precipitation than normal in 2018. The increased moisture limited her forage production with only about 100,000 small square bales produced; normal is closer to 400,000 bales, she said.

The weather did not allow time to dry hay, much less put it up properly. There was never a window of more than a day or two without rain, she explained.

Summers, who is known on social media as the Hay Lady from PA, said hay supply from the East Coast will be limited. She has already sold all of her alfalfa hay, as well as orchardgrass hay. She still has some different grass hay forage in stock.

Her family's hay is sold locally and along the East Coast from Massachusetts to the Carolinas. They ship hay as far away as Texas and have small and large square bales, Summers said.

"Normally, March, April and May are our big months for selling hay, but this year it got bumped up some," Summers said. "We could sell hay every day if we had it."

With limited supply and high demand, it is no surprise the price of hay has been on the higher end.

Summers said prices for hay has risen steadily in recent years as the economics of hay production has forced hay producers to ask more for their forages. The days of $2 to $3 per small square bale are long gone as costs have risen and last year the weather was uncooperative, she said.

The Pennsylvania Weekly Hay Report from USDA Ag Market News in New Holland reports hay prices for southern Pennsylvania auctions. For the week ending Jan. 11, alfalfa ranged from $205 to $260 per ton with only seven loads reported.

Forage production seems to have been less affected by the increased amount of precipitation in the Corn Belt.

Jim Brown, who raises forages near Lebanon, Indiana, said 2018 was a pretty good year in his region. While it was a little wet in the fall, he managed to get five cuttings with decent yields, he said.

"We had higher yields as I started to use some different alfalfa seed, so I saw about a ton-per-acre increase in yields in some of my fields," Brown said.

All of Brown's hay is put up in small squares bales and sold to local customers in the area just outside of Indianapolis. With limited cattle numbers in the state, most of his customers own horses or small ruminant animals such as goats.

Brown said the demand for forage in his area is strong despite the good yields, and as a result, he has already sold all of his 2018 hay. A good economy is key for his forage market; his customers will stop buying hay in a downturn, which last occurred in 2008.

Alfalfa hay in small square bales is selling at around $6/bale with some reports of around $7/bale, he said. He sold his orchardgrass bales for $5/bale.

"Prices are pretty stable in our area," he said. "From talking to different folks, there appears to be a decent supply of hay out there."

Even farther west, hay supplies appear to be slightly better and thus prices are lower.

The USDA Nebraska Hay Summary for the week ending Jan. 11 reported alfalfa and grass hay sold fully steady this week. Prices for alfalfa are ranging from $72.50 to $180/ton. Grass has ranged from $65 to $170/ton.

"If there is a large accumulation of moisture, cattlemen will have to start supplementing feed again that will dwindle supplies of reserve hay," the report stated. "It appears most potential buyers will procure hay on an as-needed basis, not stockpiling large quantities." 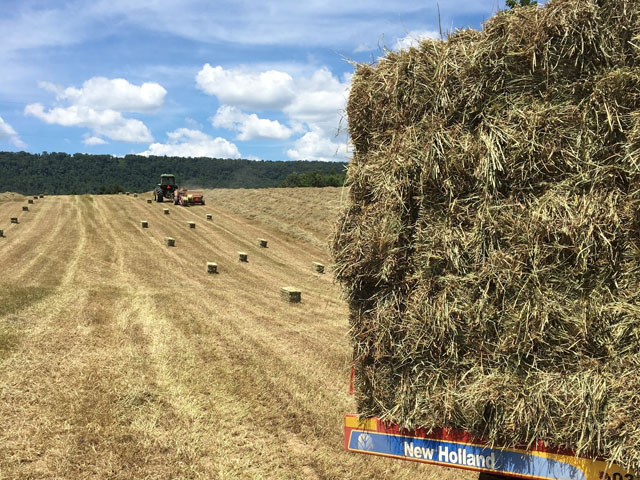