With Democrats winning control of the U.S. House of Representatives in November, change equals new opportunities to tell the story of fertilizer, said Clark Mica, vice-president of legislative affairs for The Fertilizer Institute (TFI). Mica spoke to attendees of the 2018 Fertilizer Outlook and Technology Conference recently in Jacksonville, Florida.

Change will definitely be in the air in the 116th Congress. Mica said that, while there will be a few new freshmen in the United States Senate, there was be more than 80 freshman in the U.S. House, an 18% turnover.

In addition, there will be new committee chairs in the House.

"All of these changes means opportunity for us as TFI and for you as the fertilizer industry, because it's more people to educate about what it is that we do," Mica said.

It is important that the industry interacts with all elected officials, whether they are Republicans, Democrats or Independents, Mica stressed. The fertilizer industry has a good story to tell the world, as it helps to feed the world, he said.

The fertilizer industry is in a good position to tell its story, thanks to the Congressional Fertilizer Caucus. This is a group of about 51 members of the House, led by four co-chairs -- two Democrats and two Republicans.

Mica said the Congressional Fertilizer Caucus helps House members to educate their colleagues and their staffs about what fertilizer is, why it is important and what some of the key issues are regarding fertilizer. This is a solid base to build on, he said.

The Congressional Fertilizer Caucus had a 98% win rate in the most recent election, with just one member losing, while four others retired and their seats stayed with the same party. These four have a pretty good chance of joining the caucus, he said.

Mica said a majority of those in the Congressional Fertilizer Caucus are from rural districts. These are members who are not normally in toss-up seats and are usually people with a deeper understanding of the fertilizer industry, he said.

"At least two Democrat members of the caucus will be important committee chairs in the House, which is good news for us," he said.

The Fertilizer Caucus also attempts to get members of the House to visit various fertilizer facilities in their districts. Handing a sheet of paper about fertilizer to a House member is one thing, but getting them to visit a facility and talk to the people who run it is something completely different, he said.

Gosar's visit to the fertilizer facility also included visiting a local farm to see directly how farmers are applying fertilizer to their crops, Mica said.

TFI is focusing on six public policy priorities for the new Congress and will discuss with elected officials, according to Mica. These areas are water quality, safety and security, the clean air act, transportation, energy and regulatory reform.

So how do these priorities mesh with the House Democrat priorities? Mica said about the only one that overlaps both groups is infrastructure, which falls in with transportation.

Other important issues that may affect fertilizer in coming months that TFI is watching closely is how the House handles the United States-Mexico-Canada Agreement (USMCA), as well what happens with the continuing trade dispute with China.

Mica said they are hearing grumblings that the Democrat House may not want to pass USMCA, which could be debated in February 2019. This will be something worth watching, he said. 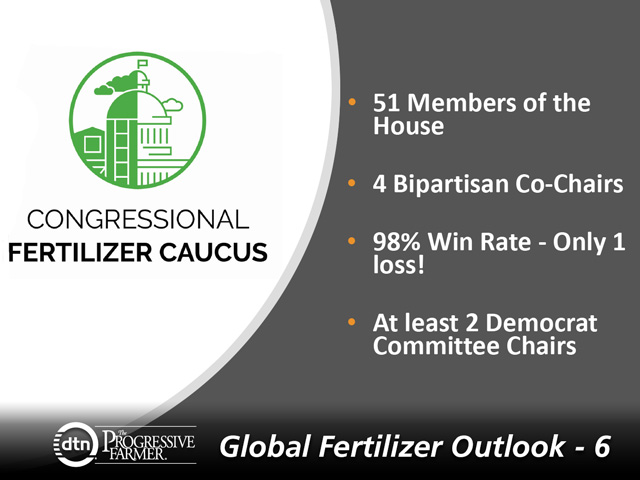