JACKSONVILLE, Fla. (DTN) -- The world phosphorus fertilizer market appears well balanced heading into 2019, but there are signs pointing to possible supply issues, especially if environmental regulations take hold and reduce Chinese production and exports. If this does occur, world P prices could move to levels that could trim demand.

Global demand for phosphates has picked up in recent years, said Mike Rahm, vice president of market and strategic analysis for The Mosaic Company, at the 2018 Fertilizer Outlook and Technology Conference recently in Jacksonville, Florida. Global shipments increased 1.5% per year from 2010 to 2015, but the pace of growth has increased to about 2% per year since 2015.

Rahm said shipments of the leading finished phosphate products increased 2.4%, or 1.7 million metric tons (mmt), to 69.4 mmt in 2017 compared to the previous year. This number is projected to increase slightly to 69.9 mmt in 2018.

Phosphate shipments by region show extraordinary gains -- outside of China and India. Demand excluding those countries is impressive at 3.4% from 2010 to 2015 and at a torrid rate of 5.6% per year during the last three years, he said.

Rahm said because of various environmental regulations in China, the nation's P production is expected to fall, much like its nitrogen production.

Chinese phosphate exports during the first three quarters of this year likely were off 2.5%, or 190,000 metric tons, from the previous year. The rolling 12-month total at the end of September, however, was down 1.17 mmt from the same date a year earlier, he said.

The Yangtze River basin accounts for nearly all of China's phosphate rock and about 90% of its finished phosphate production. The Yichang City government decreed all industrial activity in prohibited areas along the river must stop by the end of 2019. The Chinese government expected phosphate rock output would decline 30% in 2018 alone, he said.

Rahm said a team from his company visited the area earlier this year and estimated about two-thirds of the 6.0 mmt of DAP/MAP capacity in Yichang City (in China, a city is comparable to a U.S. county) is at risk of closure by the end of 2019.

Other supply issues are also present in the P market.

Rahm's company temporarily idled its Plant City, Florida, facility for a minimum of one year last fall. The status of the plant is under review, he said, and a decision to restart or continue to idle in 2019 will be made by the end of the year.

Other phosphorous-producing facilities across the world have adjusted production levels. Rahm estimated various projects likely will deliver 1 mmt less than the market expected in 2018.

Another factor affecting supply will be increasing raw material cost. Rahm said the cost of sulfur and ammonia per ton of DAP today is more than $50 greater than one year ago.

Despite various issues affecting the supply side, there are several positive demand drivers in the P market.

Rahm said record-shattering harvests around the globe have removed record amounts of phosphate from the soil during the last few years. For example, grain and oilseed production, roughly about 3.16 billion tons, removes 18% more phosphate than output did during the 2007-to-2012 time period, he said.

While plant nutrients are more expensive than in recent years, they do remain affordable. Rahm pointed to the affordability metric, the ratio of plant nutrient spot prices and an index of nearby futures crop prices.

He said he is a bit cautious on his forecast for several different reasons. Uncertainty about crop prices, higher phosphate prices, drought and lower crop production in some regions, as well as trade and other policy uncertainties, could factor high in how much phosphate is shipped in 2019.

Brazil is increasing its use of P fertilizer. Rahm said plant nutrient use has more than doubled since the turn of the century. Shipments of P fertilizer have increased at a compound annual growth rate (CAGR) of 4.4% from 2000 to 2007.

Chinese shipments are projected to stabilize following another drop in 2018. Other countries, such as Brazil and nations in Asia and Africa, are all projected to post strong gains during this period, he said. 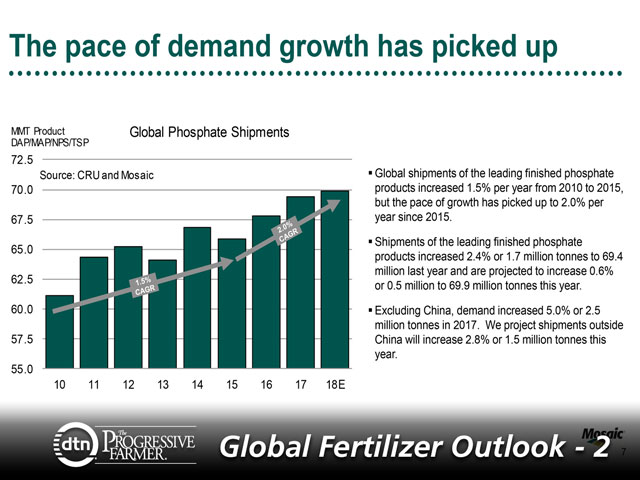