The Bayer Crop Science new executive leadership team took to the stage at the company's German headquarters here September 18 during its "Future of Farming Dialogue 2018." The new global management team is a nearly even mix between legacy Bayer leaders and those who once worked for Monsanto. Bayer completed its purchase of Monsanto in mid-August after lengthy negotiations, much regulatory scrutiny and extensive mandatory spin offs.

This annual dialogue conference, to which journalists from around the world are invited, is designed to address growing global challenges in agriculture. This year, topics explored wide-ranging ideas from gene editing and microbiome technology to how agriculture might one day be transplanted into space.

Despite such futuristic presentations, questions from journalists centered more on the present: How does Bayer plans to navigate corporate cultural changes; how will it answer ongoing legal challenges to key products such as glyphosate?

Liam Condon, president of Bayer's Crop Science Division, told conference attendees not to expect perfect answers after only three weeks of togetherness. However, he pledged that the company is working to form up teams from the pool of 35,000 Bayer crop division employees, which includes some 8,000 scientists.

Strict "hold separate" regulations by the Department of Justice (DOJ) meant intimate business details revealing how each company operated couldn't be shared prior to the formal close. "So it will take a little bit of time because it is two companies with two portfolios coming together," Condon said. He implied it could be the end of the year before financials would be available on the combined company.

That melding is complicated by the fact that, prior to the purchase, Bayer and Monsanto had been fierce competitors in one of the more revolutionary periods in the crop chemistry industry.

However, Bayer's LibertyLink became an important alternative trait platform as weeds began to outsmart glyphosate. The ability of weeds to resist multiple herbicide sites of action now has crop protection companies frantically searching for novel chemistry. It has been more than 30 years since a new class of herbicides was successfully commercialized.

Bob Reiter, head of research and development in the Crop Science Division, reminded DTN in an interview that Monsanto initially tried to merge with Syngenta as a strategic partner. Although that deal fell through, Reiter said it was an early indication that Monsanto saw "tremendous opportunity in the crop protection space."

While Bayer had deep chemistry chops and owned a seeds and traits business, they didn't participate in the seed market in the same way Monsanto did, Reiter said.

"They didn't have a corn footprint," he said. "And as you look at our total business today, corn will far and away be our number one crop in the combined business." He also noted that Bayer's foothold in soybean seed sales was significantly smaller than Monsanto's -- particularly in the South American market.

Brett Begemann, a 35-year Monsanto veteran and the new chief operating officer for the Bayer Crop Science Division, was unable to attend the Germany event this week, but met with DTN on August 21, soon after the close of the Monsanto purchase. He said then that farmers are currently weighing 2019 seed purchases and predicted customers should find "business as usual."

"There were substantial changes that occurred through the regulatory process," said Begemann. "We're moving forward with our seed business based on how Monsanto operated a seed business ... because they (Bayer) had to sell their seed business.

"Teams will be working throughout the year to get feedback and input from customers and, in 2020, farmers should start to see the results," he predicted. DOJ was thorough in preventing overlaps in the portfolios. BASF now owns most of the assets Bayer was required to divest -- including the LibertyLink platform.

Begemann predicted that data and data analytics "will change agriculture more in the future than biotechnology changed agriculture." However, he also noted that the rich pipelines of both companies should generate new tools.

Specifically, he pointed to the long-held knowledge that fungicides behave differently with different genetics. "It's been hard to look at that because we [Monsanto] didn't have fungicides," Begemann said. "That's going to be some early innovation that is going to improve the efficacy of products already in farmer hands," as the combined company can match Monsanto's deep hybrid seed catalog with Bayer's well known abilities to create fungicides and other crop chemicals.

For the present, though, two of the most valuable herbicide trait technologies now under the Bayer umbrella face challenges. On August 10, a California jury awarded $289 million in damages to a groundskeeper who claimed exposure to Roundup caused his cancer. The company now faces 8,700 plaintiffs in the U.S. with glyphosate claims and that number could grow.

In post-trial motions filed with the court on Tuesday, September 18, Bayer asked the court to consider vacating the California decision or to set aside or modify the damages and/or order a new trial.

In a session with reporters, Condon stressed the importance of making decisions based on science. He noted that Bayer also had glyphosate in its portfolio before acquiring Monsanto and the company "intends to stand behind this chemistry."

The second herbicide challenge is that with its Monsanto acquisition, Bayer also inherits the Roundup Ready 2 Xtend technology -- which allows soybeans and cotton to tolerate in-season use of dicamba herbicide. Worries about the tendency of the herbicide to move off-target and damage other crops and landscape plants is one of the most contentious issues in agriculture.

Despite a long list of application requirements and mandatory training of spray applicators, the herbicides -- XtendiMax, Engenia and FeXapan -- have continued to accumulate complaints regarding injury to sensitive crops and plants.

Now, the clock is ticking as EPA must decide what to do with the herbicides approved for use in the Xtend weed control system, which have reached the end of their two-year conditional registration.

Condon said he was hopeful the EPA label would be renewed and expectations are that it will happen soon, but he did not offer insight into how those labels might change. He also said Bayer will be working hard to work more closely with the weed science community to find better stewardship answers.

Bayer leaders said all corporate integrations encounter bumps and initially, Reiter said one of first challenges may come from pure logistics. The majority of the company's crop protection capability is currently in Europe, while research capability on seeds and traits sits in the Americas -- the U.S. in particular.

The test will be to make scientists of different disciplines work across this physical space, Reiter said. "It is going to take some time and we have to be very thoughtful about how we become one organization," he added.

"At the same time, we weren't the ones that plunked down $66 billion. So let's give (Bayer) a little credit for their level of risk taking," he said. 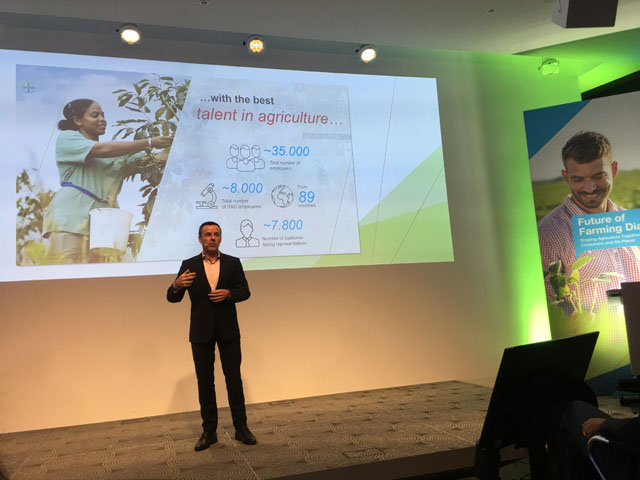