The DTN/The Progressive Farmer 2018 Digital Yield Tour, powered by Gro Intelligence, is an in-depth look at how the 2018 corn and soybean crop is progressing, without the dust, sunburn and gasoline bills of a traditional multistate tour.

The digital "tour" will cover corn and soybean yield expectations of 10 Midwest states: Illinois, Indiana, Iowa, Kansas, Minnesota, Missouri, Nebraska, Ohio, South Dakota and Wisconsin. This year's tour is based on the real-time crop analytical models of Gro Intelligence, a data analytics company focused on the agriculture industry, but it also includes weather and other crop condition information from DTN plus on-the-ground reports from farmers within the DTN Ag Weather Station network.

"A classic modeling system compares historical data to present conditions and variables within the data," Heneghan said. Once set, those models apply the similar basic comparisons each season.

"With machine learning, our system is learning which variables have the most weight at any particular time, and re-adjusts itself to those variables that are likely the most important at that time." When the model misjudges a variable, it automatically "remembers" that issue for the next time that scenario happens.

Using satellite and other broad-swath data also gives a more complete picture of yields, Heneghan said. Gro's datasets start at the county level, then build from county data into statewide and national yield outlooks. In recent years, USDA has had data gaps in certain counties due to the lack of farmers participating in National Agricultural Statistics Service yield surveys.

"For this digital yield tour, that county data means that farmers can follow web links to the state maps, then hover over counties they are interested in and get detailed yield and related numbers."

Constant updating "can make our models a bit more volatile early in the crop season," he said. "We at times have higher highs and lower lows compared to USDA and other trade estimates in the marketplace early on," as highly weighted variables within the model have sway over other data at that point in time.

"As we move through July, the variables that will ultimately determine yield (like heat and rainfall patterns) begin to show through in the model." An example, he noted, was in 2017 when Gro models varied significantly from USDA trendline yield predictions. Those familiar predictions, based on USDA's historical yield patterns, smooth out early season weather extremes or pest issues that machine learning models may focus on. By harvest, the Gro corn model had set yields at 176.86 bushels per acre for the national average. USDA's final tally, announced during the January crop report, was 176.6 bpa.

During much of the growing season, NDVI imagery from the network of NASA satellites orbiting Earth is a critical piece of the Gro model. "Vegetative health is the key variable in corn and soybean production," Heneghan said. That health, however, has to be balanced with the area of crops that show poor health and likely low production.

A classic example that will weigh into the final DTNPF 2018 Digital Yield Tour national tally: Large swaths of eastern Kansas and northern Missouri have some of the driest conditions in years. Much of the corn in those areas is either being cut for silage or awaiting the crop insurance adjuster, not the combine. That loss of production, though, must be compared to the ideal crop conditions in parts of Nebraska, Iowa and Illinois.

In early August, the Gro corn model set the national average yield at what research analyst Eric Moore called a bearish-at-the-time 177.5 bushels per acre. Trade estimates were around 176 bpa. When the Aug. 10 USDA report came out with a value of 178.4 bushels per acre, analysts said their trading customers were better positioned to profit from the even more bearish news.

SADDLING UP FOR THE TOUR

Each day of the digital tour, which runs Aug. 15-20, DTN reporters will dig into Gro datasets, looking at significantly high and low counties in each state and looking for reasons for those extremes. They will add in comments from farmers in those areas, when available, to give a fuller picture of what the crops look like. They will also refer back to weather, pest and disease issues that might have plagued an area and look for the conditions that led to some of the "catch up" stories we've been hearing.

Articles will include links to the company's visuals database, so readers can look at the production patterns across their state or other areas of interest. They will be able to drill down into the county-level modeling numbers, as well, to compare what USDA and their own experience says about the county's production with what the models reveal.

Gro models update almost constantly as new data from satellites and other sources comes in. The company's public website typically reveals yield prediction numbers that are several days behind the latest model "run." That is why the yield a viewer sees might be different than yields revealed in the DTN articles that focus on current-day conditions.

It's rare for a commodity trading intelligence company to share its inside look at the markets with the public. It's Gro's philosophy to change that, which is one of the reasons the company is providing its data to DTN/The Progressive Farmer.

Gro founder and CEO Sara Menker, a former Wall Street commodities trader, said her company's open approach comes from the desire to change how data is actually used to make decisions in agriculture and food systems. In a 2017 TED Talk, she noted that when founding the company, she wanted to create a way to make critical data "actionable by decision-makers at every level." In building her company, she said, "We realized that the world, not just world leaders, but businesses and citizens ... lacked an actionable guide on how we can avoid a coming global food security crisis."

Heneghan encourages the public to look through the website and read the company's white paper on how the models were developed.

"We don't want our methods to be just another black box that has limited trust." Trust in machine learning models will be critical, he said, in the fast-changing world of crop production. "The strides companies are making in hybrid performance, in mating the right seeds to right soil types and adding the correct fertilizers and pesticides, plus the better crop management farmers are doing today, just keeps pushing the U.S.'s ability to produce higher-yielding crops even in less-than-ideal conditions."

Another reason for the openness is that much of the data Gro and other consultancies use in their yield models is from public sources, Heneghan said. "So we're taking a very public approach to this type of yield analysis in hopes to start a broader conversation around it. We hope it results in a product people can pick up and use as part of their current marketing strategy, as well as start a conversation around the subject in general."

Developing that trust is also behind the conversation between Gro and DTN in the 2018 digital yield tour. "DTN and Progressive Farmer are long-established businesses with a reputation for supporting farmers and the agribusiness community," Heneghan said. "Being a newer, lesser-known company, we appreciate the ability to provide the analytics we've been working on alongside the weather data and the journalistic content that DTN/PF brings."

"As a company focused on turning data into actionable insights for farmers and others in agriculture, DTN has for some time wanted to provide a high-tech answer to the traditional crop yield tour," said Mark Holland, senior vice president-Agriculture and Transportation at DTN. "The yield models created by Gro Intelligence cover every field in every county of a state, not just random fields as with traditional crop tours. We're excited to share these insights, combined with DTN's boots on the ground, to give an in-depth look at the 2018 crops."

To learn more about Gro, see their website here: www.Gro-intelligence.com

To read the research white paper on the modeling system, go here and select to "Download the corn yield model paper": https://gro-intelligence.com/…

Links to each state's yield and crop condition maps will be given in the articles to come.

Note that the yields shown on the public website, which typically are one week delayed from the live data, will show a different yield estimate than the figures you will see reported in the daily tour stories. 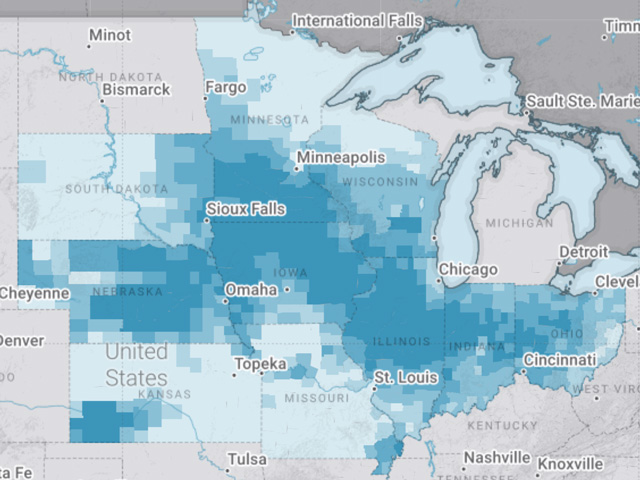