ROCKVILE, Md. (DTN) -- There are a lot of corn disease factors lining up in Heath Vrbka's cornfields.

"We're just starting to see common rust coming on," Vrbka said of his farm in east-central Nebraska. "That usually follows up with gray leaf spot and you can find quite a few fields that have bacterial leaf streak around here." He'll also be on alert for Goss's wilt, which cost him some yield a few years ago.

The heat and recent rains make for miserable scouting conditions, but don't let that keep you out of your fields, plant pathologists told DTN.

Gray leaf spot and physoderma brown spot are starting to surface across the Corn Belt, and a relatively new disease, bacterial leaf streak of corn, is spreading rapidly in the Western states, as well. Goss's wilt is likely just around the corner, after scattered and sometimes severe hail storms battered many Midwest cornfields in recent weeks.

Only one of those diseases -- gray leaf spot -- is well controlled by fungicides, but it's important to note which hybrids are succumbing to the others, said University of Nebraska plant pathologist Tamra Jackson-Ziems. "For many of these, hybrid selection is going to be the most effective and economical management strategy," she said.

This disease thrives in hot, humid environments, so it's bound to love the recent soaring temperatures and damp fields where he lives, Vrbka noted.

"Many of the best fungicides are only going to last three weeks," Jackson-Ziems explained.

Scouting cornfields in an M or Z pattern will give you the best representation of the field, she said. "I would target high-risk areas -- such as places that have had the disease before," she said. "Watch the lower leaves, because gray leaf spot usually starts at the bottom."

The disease's gray or tan lesions will be rectangular in shape and run tidily between leaf veins, with smooth edges. That characteristic can help you distinguish them from a new lookalike disease -- bacterial leaf streak.

This Corn Belt newbie has only been confirmed in the U.S. for three years, and researchers are still working to understand how it develops and what kind of a threat it poses corn farmers.

"I hope growers understand it's a slow process," said Jackson-Ziems. "We're all learning together and we do really value their input and observations, because there are still a lot of unknowns."

The disease's lesions mimic gray leaf spot, but they tend to be more bright yellow. Most importantly, the edges of most lesions are wavier and less clear-cut, Jackson-Ziems said. "Bacterial leaf streak can and often does start earlier in the season when we wouldn't see other foliar diseases," she added. "We confirmed it in V4 corn last year."

In Nebraska alone, the disease is already present in 60 of the state's 93 counties, with more likely to be added this week, Jackson-Ziems said.

Growers have noticed, Vrbka said. "It seems to be very hybrid specific," he said. "And it's hard to know the yield impact."

Jackson-Ziems is urging growers to scout for it and report their findings to their seed company, as well as state Extension agents. "Make a note of how widespread it is, which fields have it and which hybrids, so you can work with your seed company agronomist," she said. "It's new enough that companies haven't had much time to evaluate hybrids."

Fungicides won't control this bacteria-based disease, and bactericides aren't an economically sound option for most corn growers, Jackson-Ziems said. Crop rotation can likely help, but the disease has been spotted in cornfields rotated from soybeans, and it can survive on a number of other species, such as oats, foxtail, yellow nutsedge and a few native prairie grasses, she added.

Physoderma brown spot is caused by a "fungus-like" pathogen with swimming spores, Jackson-Ziems explained. The spores often infect the plant through water-filled corn whorls. As the whorls fill up and dry out over the weeks, the spores create a banding pattern on the leaves. The infection produces two types of lesions. The first are small, bright-yellow dots, scattered across the leaf and often mistaken for southern corn rust. Remember that southern rust pustules will rub off -- these lesions will not budge, Jackson-Ziems noted.

The second type of lesion are larger and black and occur only in the midrib of the leaf.

This disease, which requires plant wounds to infect, is a common phenomenon in fields damaged by wind or hail. The large, uneven lesions will have distinctive black freckles along their edges and can be shiny in appearance.

After a run-in with Goss's wilt in 2015, Vrbka lost 10% to 15% yield in one cornfield. Since then, he's picked hybrids with good resistance to the disease.

"We've placed an emphasis on picking hybrids that are Goss's wilt-tolerant, and it's made a big difference," said. "Most seed guides will have a rating for it now."

For more help on identifying and managing these diseases, see this article from Jackson-Ziems: https://cropwatch.unl.edu/….

Editor's Note: MyDTN subscribers can track the potential for grey leaf spot and northern corn leaf blight in corn and frogeye leaf spot and brown septoria leaf spot in soybeans with new Crop Disease Risk maps. The maps, which include conditions in 12 states, are found in the "Weather/Ag Weather" page on MyDTN. Scroll to the bottom of the page to see the latest potential for disease outbreaks in your area. Click in the maps to see disease predictions for the next 12 days. 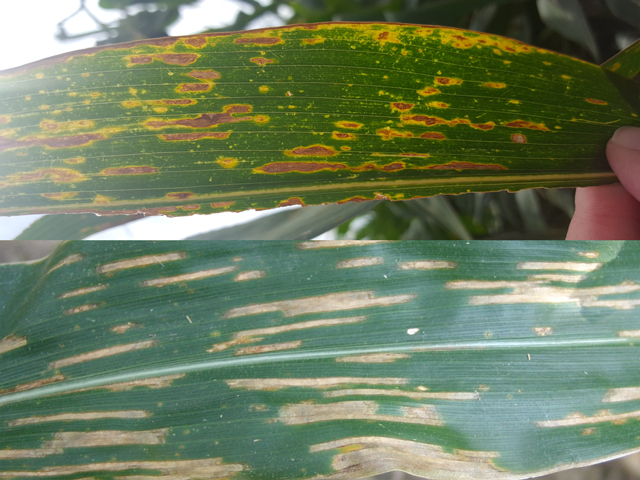