Herbicide resistance has made many spring weeds difficult to reign in once they get a foothold in your fields, Kruger said. Growers who missed fall herbicide applications are especially vulnerable, added Ohio State University weed scientist Mark Loux.

"Using $5 to $8 of herbicide (per acre) in the fall goes a heck of a long way," he said. "If they haven't done a fall application, growers need to know they're going to have to use a more comprehensive and expensive burndown treatment."

Remember that when it comes to spring herbicides, an early start is key.

"Getting out there at least 30 days before planting opens up your options in terms of chemistry you can use and lets you get good chemistry rotation in your burndown," Kruger said.

Here's a look at the top culprits coming to a field near you this spring:

This winter annual has earned its place as the most problematic spring weed across the Corn and Soybean Belt.

Left untreated in the fall, marestail overwinters as small rosettes and then springs into action as soon as temperatures rise. It can carry multiple types of herbicide resistance, most commonly glyphosate and ALS-resistance.

Marestail is particularly difficult to manage in soybeans.

"If marestail is not completely killed before planting soybeans, it cannot be successfully controlled in the crop," Penn State University weed scientist Dwight Lingenfelter warned. "Glyphosate, gramoxone or Liberty are all options, and make sure to use 2,4-D and/or Sharpen in the burndown tank mix, and now, with the advent of Xtend soybeans, you can use certain dicamba products."

Keep in mind that glyphosate is largely ineffective against marestail, and 2,4-D shows variable control once the weed has bolted, Loux added. So the old burndown standby of glyphosate and 2,4-D is unlikely to work if you are facing an established marestail population in your field this spring.

Because marestail can continue to emerge after crop planting, Loux and Lingenfelter recommended adding residual herbicides to the burndown.

Despite being summer annual weeds, common and giant ragweed have a long emergence window from early spring into the summer, Lingenfelter noted.

"Although the triazine herbicides have historically been effective for common ragweed control, resistance or tolerance or environmental conditions have allowed for ragweed escapes over the last several years," Lingenfelter warned. "Higher atrazine rates -- 1.5 to 2 pounds active ingredient per acre -- are now necessary for adequate control."

For Western Corn Belt growers, kochia, "the weed of the west," will be a primary target of spring burndowns, Kruger said.

Kochia is fairly cold tolerant, which makes it one of the earliest emerging weeds, Kruger noted. "Kochia also really does well under drought condition, so it's more competitive than a lot of weeds in the High Plains," he said.

Like marestail, glyphosate and ALS resistance are common in kochia populations. Triazine and 2,4-D resistance have also surfaced in some areas of the High Plains, which takes more chemistries off the table, Kruger said. Isolated pockets of dicamba-resistant populations in western Nebraska and eastern Colorado have also been reported, he added. 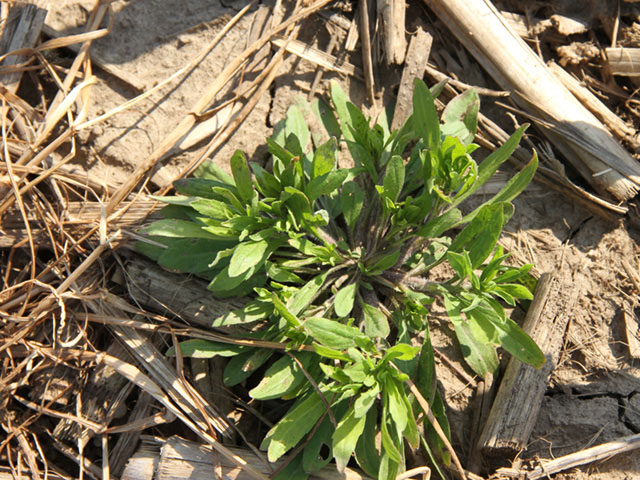