OMAHA (DTN) -- Farmers in the Western Corn Belt saw heavy rains in the last couple of weeks, which delayed the start of harvest. Now as it begins to dry some in locations, farmers are returning to their fields and are finding certain issues with their corn crops.

Among the issues are premature corn kernel sprouting and weakened stalks thanks to the large amount of moisture that fell in the region. A continued slow harvest combined with more uncooperative weather could mean some bad news for corn farmers.

Heavy rains have doused most of the WCB in recent weeks, according to DTN Senior Ag Meteorologist Bryce Anderson. The area seeing the heaviest rains stretched from central Kansas through the eastern half of Nebraska, the western half of Iowa and into southern Minnesota.

One area hit especially hard by the heavy rains was from south-central into eastern Nebraska. In the first 11 days of October, this area averaged 3.72 inches of rainfall, which is about 2.87 inches above normal, Anderson said.

Heavy rains and even hail damage have presented some complications for farmers in the region this fall.

Doug Saathoff, who farms near Trumbull in south-central Nebraska, tried to harvest soybeans on Wednesday but decided it was just too damp.

"Soft ground and flex heads are a bad combination," Saathoff told DTN. "They tend to push dirt when conditions are like this."

Since Saathoff couldn't harvest beans Wednesday afternoon, he stopped by one of his cornfields and picked a bunch of ears. One of the ears had evidence of premature corn kernel sprouting. He only found sprouting on one ear, but Saathoff said he fears this could be a sign of things to come for farmers in the region.

Just down the road from Saathoff, Hastings farmer Randy Uhrmacher has also found kernel sprouting in one of his Adams County cornfields. He posted a photo of a sprouting ear of corn on Twitter.

Despite finding some sprouting, he said he really doesn't know how widespread the problem is.

"I just walked another field with a different hybrid and it looked fine," Uhrmacher said. "A couple of guys commented on my tweet, saying it is common."

According to a report by Bob Nielsen of Purdue University that was posted on the university's Corny News Network website, corn kernel sprouting occurs when dry kernels (less than 20% grain moisture content) are re-wetted, especially when temperatures are warm. A common situation for sprouting to occur is when there is a combination of dry grain, upright ears on the plants and rainfall that is captured by the husk leaves of the upright ears. The result is sprouted kernels near the butt of the ear.

The likelihood of germination occurring on upright ears with grain at higher moisture contents is typically much less than for drier grain, Nielsen wrote.

"Overall grain quality can deteriorate enough to cause problems with drying and storage of grain," Nielsen wrote. "Another consequence of the increase in the percentage of broken corn and foreign material in affected grain delivered to the elevator is that it may result in significant grain price discounts to the grower."

Another agronomic concern beyond kernel sprouting is deterioration of stalk quality in corn. Stalk rotting due to the stalks weakening from moisture is also high on farmers' mind as well, especially with harvest getting off to such a slow start in the WCB.

Don Batie, who farms near Lexington, Nebraska, said he doesn't believe it is much of an issue right now but is something to watch as harvest progresses.

"I haven't checked my stalks to see if we have any stalk rot starting, but that's possible with all of this wet weather," Batie said. "This is the perfect weather for that."

He was starting to harvest soybeans on his Dawson County farm on Wednesday afternoon. Farmers in his region are focusing exclusively on getting their beans harvested after severe thunderstorms with hail pounded the area on the first two days of October.

The field he was harvesting Wednesday afternoon was hit by hail, and Batie figured there was about 5 to 6 bushels per acre on the ground. Some of his neighbors to the south of him reported losing closer to 15 to 30 bushels per acre, he said.

Batie said the farmers in his home region can't combine beans fast enough as pods are cracking open with the moisture. His beans were at 15% moisture at 11 a.m. Wednesday, and by 2 p.m., they were down to 12%.

Saathoff also saw some of his bean fields damaged from hailstorms. He estimated his loss could be around 10 bpa, at least in the field he was in on Wednesday.

Also weighing on farmers' minds in the region is the amount of time harvest could ultimately take this fall.

Normally, Batie will harvest until the second week of November. But with the weather delays he has already seen, harvest could be pushed into the end of November and possibly even into December with more weather delays.

With harvest stretching that late into the year, wind and snow could very well be a possibility. That would be "very bad" for the weakened corn stalks in his region, Batie said.

"My guess is many of us will still be harvesting on Thanksgiving this year," he said.

The Purdue University report on premature corn sprouting can be found at https://www.agry.purdue.edu/…. 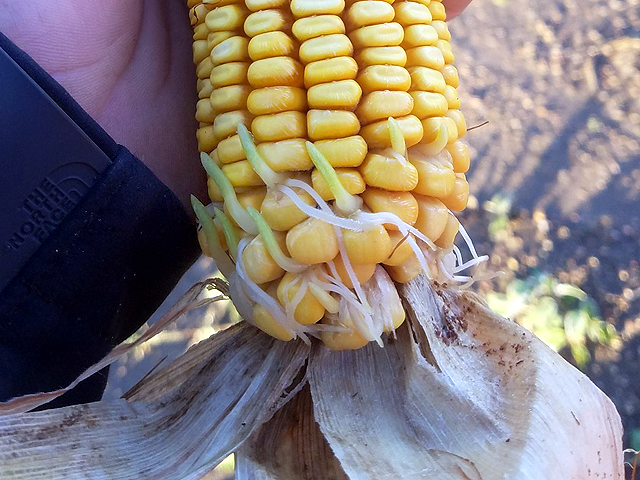