LITTLE ROCK, Ark. (DTN) -- The Arkansas State Plant Board told the herbicide industry in no uncertain terms that it does not believe new formulations of dicamba can be used without significant amounts of volatility and other off-target movement. The board unanimously approved regulations that would ban dicamba applications after mid-April, essentially limiting its use as a post-emergence herbicide.

During its fall quarterly meeting here, the Plant Board forwarded on for public comment regulations that ban dicamba applications from April 16 until Oct. 31 in 2018. That would allow fall and spring burndown or pre-emergence application of the herbicide on Xtend dicamba-tolerant seeds, but would essentially outlaw most in-season use.

The board also, after lengthy discussion, unanimously denied the consideration of a petition from Monsanto to throw out the in-season limitations. The St. Louis company called the proposed rules "arbitrary and capricious" and threatened to sue the state if the ban moved forward.

As if to put an even finer point on its feelings about the controversial dicamba issue, the board passed a resolution commending a number of Arkansas scientists for their work and guidance on the subject. That commendation included University of Arkansas weed scientist Jason Norsworthy and private consultant Ford Baldwin, both who saw their scientific integrity specifically called into question in the Monsanto petition. See DTN's story on the petition here: http://bit.ly/…

The new dicamba regulations now move into a 30-day public comment phase, with a full public hearing scheduled for Nov. 8. Once all comments, written and oral, are summarized, final regulations will be submitted to the Arkansas Legislature for codifying into law.

The board invited a number of speakers, including herbicide company representatives and weed scientists, to discuss postemergence dicamba applications. It also invited comments from members of the Dicamba Task Force, which the board organized earlier in the summer and which created the proposed dicamba regulations.

Herbicide industry representatives focused on the need for better applicator education, downplaying the volatility issue and laying most 2017 dicamba damage on spray tank contamination or not following label directions.

The board made it clear that they disagreed, and that their chief concern was volatility. "We have a lot of experience applying a lot of products out here over decades," said board member, plant pathologist and Extension administrator Rick Cartwright. "But we've never seen anything like this," he said, referring to the more than 900 damage complaints in Arkansas and thousands of similar complaints across the U.S. "You apply (new dicamba formulations) to soybeans, and 36 hours later the product gets up and goes somewhere else. I don't know how you educate people to fix that.

"The product has to be fixed," Cartwright said, to the nodding of others on the board.

The board's meeting format did not allow open public comments from the crowd, including those from a group of Arkansas farmers who created a proposal they wanted the board to consider, which would have allowed in-season dicamba use. Their proposal called for, among other things, mile-wide buffer zones, temperature stipulations, and would require applicators to prove insurance protection against off-target movement. While board members separately acknowledged the farmer proposal, they made no reference to it in official proceedings.

Board members did show clear concern that they were putting Arkansas farmers at a disadvantage by imposing the ban period. The Mississippi Delta region has some of the worst infestations of glyphosate-tolerant Palmer amaranth and other weeds, which the Xtend seed and herbicide technologies were created to deal with.

Board members asked DuPont, Monsanto and BASF representatives if there was any news on a dicamba formulation that showed less or no volatility. They were told that while companies continued to work on improving formulations, there was no such thing currently as nonvolatile dicamba.

Monsanto representative Ty Vaughn, vice president of global regulatory affairs for Monsanto, offered the board 3-inch binders full of lab and "humidome" research studies that he said showed volatility was not a great issue with the company's XtendiMax dicamba herbicide. Board members, however, took greater interest in the presentation by weed scientist Jason Norsworthy, which summarized volatility studies both from his trials and those from several other states.

Monsanto and BASF presenters noted that much of the movement and damage seen in 2017 did not cause yield losses in soybean fields. That has been a rallying cry of many farmers who are supportive of the Xtend technology, including some social media posts showing increased pods on soybeans damaged by dicamba drift.

Board members repeatedly said yield losses were not the issue: Off-target movement was against the law, members said, regardless of the damage inflicted.

"This thing about not seeing yield loss, or they'll grow out of it, that's beyond the point when you're talking about pesticide stewardship," Cartwright told DTN after the meeting.

In a surprise to some attending the board meeting, Board Chairman Otis Howe presented the petition issued by Monsanto demanding the board reject the proposed regulations on dicamba.

That petition, among other things, called the damage reports in Arkansas an "aberration" and a regional issue not worthy of a statewide ban. Board members bristled at the repeated use of the term "arbitrary" leveled at the regulations it was creating.

"We've met and discussed this (dicamba) issue how many times," board member Larry Jayroe said, clearly agitated. "How can that be called arbitrary and capricious?"

"This is hardly arbitrary," Cartwright agreed.

Monsanto has not yet responded to DTN questions on whether it will follow through on a lawsuit over the matter.

In a related dicamba issue, the board approved new language that would increase fines for "egregious" misuse of dicamba or similar herbicides to $25,000 per incidence. The state penalty cap had been $1,000.

The dicamba application regulations now are subject to a 30-day public comment period, followed by a public hearing on Nov. 8. The board was told that Arkansas Gov. Asa Hutchinson had given a green light to proposals created by the Dicamba Task Force in August. Since the Plant Board's proposed regulations were essentially identical to the task force recommendations, the proposal can move forward for public comment.

Plant board members were told to "pack a bag" for that hearing, as state staff expect a lengthy hearing with potentially hundreds of attendees and speakers. The board will consider both written comments and those made at the hearing, then issue a final proposed rule to the Executive Subcommittee of the Arkansas Legislative Council for final rule approval. A location for that public hearing was not yet announced. 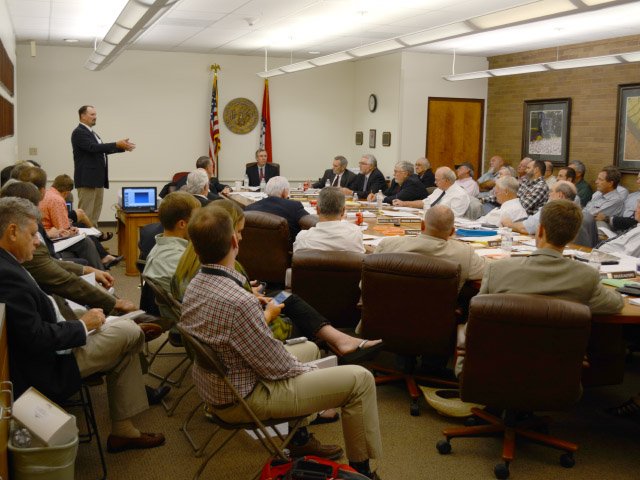