ROCKVILLE, Md. (DTN) -- There's only one person looking for soybean rust in Alabama this year.

Since January, Auburn University Extension plant pathologist Ed Sikora has slogged through the state's snake-infested kudzu patches and humid soybean fields alone, collecting pustule-spotted leaves and running tests on them in the lab.

It's the work of seven or eight people whom Sikora can no longer afford after the United Soybean Board (USB) stopped funding soybean rust monitoring in the six Gulf states of Alabama, Florida, Georgia, Louisiana, Mississippi and Texas this year.

The disease can devastate soybean crops if left untreated and still requires regular fungicide applications in Southern states, Sikora points out. This year, for example, Alabama growers have had to spray at least once and in many cases, twice, to keep the disease at bay.

"This has actually been the most intense rust year in Alabama that I've seen in the 12 years we've been looking for it," Sikora said.

Now, thanks to the wild winds of Hurricane Harvey, those rust spores are likely heading north into the Mid-Southern states of Kentucky and Tennessee -- and perhaps farther.

"Hurricanes are a really good way to spread soybean rust spores," said University of Kentucky plant pathologist Carl Bradley. "It's a bit worrisome that there's not the usual amount of scouting occurring down south without the funding."

The Gulf states serve as "the front door for soybean rust entering the U.S.," as Sikora puts it. Since Hurricane Ivan first blew the disease into the U.S. fields in 2004, those states have received national funding to monitor it from various sources, most recently USB.

The idea was to have an early-warning system for growers around the country, particularly in the Midwest, where soybeans are a major economic force.

However, the disease has never made it into the Midwest early enough to cause serious damage, and USB has focused on other priorities in soybean research, explained Louisiana State University plant pathologist Clayton Hollier.

Funding stopped in 2016, and now state plant pathologists must petition their state soybean checkoff boards for far smaller amounts of money to monitor the disease. States like Texas and Florida don't have enough soybean acres to generate any funding at all, and scouting there will likely dry up completely, Sikora said.

"We're running out of sources of funding now," Hollier admitted. "I'm not sure how much longer our state people can afford to do it. They have other issues to fund, too -- agronomic, breeding, entomology and other programs."

Hollier was using the national USB funding to scout for soybean rust, but also to monitor newer diseases such as Frogeye Leaf Spot and Cercospora Leaf Blight.

"I understand the national perspective, because soybean rust hasn't become epidemic the way we thought it might have early on," he said. "But the funding has been a big help to us to understand more about the epidemiology of all these pathogens and the development of disease from them."

Most recently, Hollier had added a more ominous threat to his scouting checklist -- fungicide resistance.

"There's more than we ever thought possible out there," he said. "That's sad news and really bad for growers."

Soybean rust did not want to be forgotten this year. Thanks to a warm winter and a wet, mild summer, the disease has seized on ideal conditions to spread in Alabama, Sikora said.

The soggy spring delayed soybean planting, which has left many fields particularly vulnerable to the disease this year. "We have a lot of young beans going into September," Sikora said. "Those are at the greatest risk and will probably be sprayed twice in the northern parts of the state, where rust has been for three weeks already."

Once Harvey blew through, Bradley decided to ramp up his scouting efforts in Kentucky as well.

"A lot of soybeans are double cropped in Kentucky after the wheat harvest," he said. These late-planted fields may still be vulnerable to infection and yield loss, he added.

The national soybean rust monitoring map has been maintained this year at http://ext.ipipe.org/…. It serves as a critical tool for scientists and growers to track and monitor the disease's spread.

However, future funding for the map is uncertain. Already, some states have ceased updating the map regularly, rendering it far less useful this year, Sikora noted.

The country's "Sentinel" soybean plots, planted to track rust's spread, once numbered 700 but are quickly diminishing. Alabama has lost at least half of theirs, and Louisiana no longer can afford to scout theirs weekly, Sikora and Hollier said.

Sikora is worried that without the national funding -- and a functional monitoring map -- soybean rust scouting efforts will slowly dwindle to nothing.

The work is admittedly unpleasant.

"You do start to wonder why am I walking for hours through kudzu patches, avoiding snakes, potholes and angry dogs to update a website that you wonder if anyone is even looking at," he said.

Sikora plans to continue scouting for the disease as long as he can. His state funding lasts another two years. However, he can't speak for future generations.

"I think this may be a problem farther down the line as trained scouts and Extension agents retire, and fewer people know what rusts looks like and how it behaves," he said. 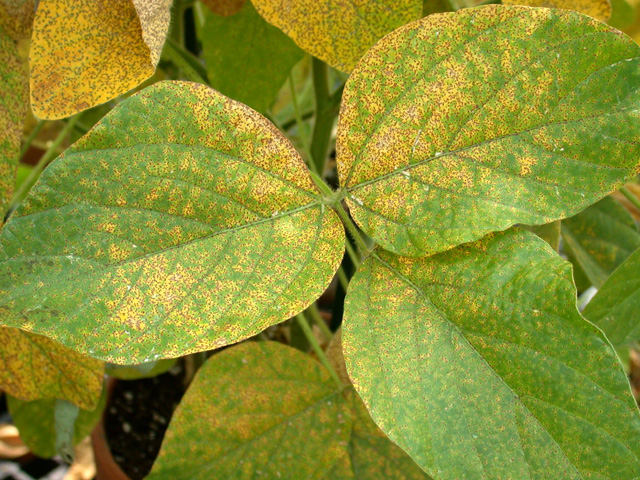