ROCKVILLE, Md. (DTN) -- Like a tardy burglar who sneaks in just before dawn, the redbanded stink bug is robbing Southern soybean growers of yield in the final weeks of a hard-fought crop.

"This is the most damaging stink bug out there," warned Louisiana State University entomologist Jeff Davis. Louisiana producers have battled this invasive pest since 2000. They routinely budget three insecticide passes to control it.

In Mississippi and Arkansas, the pest first caused significant damage in 2016. Those soybean yield losses and seed damage are fresh in growers' minds as populations mount again this August.

The frantic questions rolling into Extension offices across these Midsouthern states prompted entomologists to host an emergency meeting Aug. 17 in Stoneville, Mississippi.

THE PEST THAT NEVER ENDS

The biggest problem posed by the redbanded stink bug is its longevity, entomologists explained. It eats only legumes and will infest a soybean crop up until the moment the combine rolls through the field, said Hank Jones, an independent ag consultant in Louisiana.

"One of the things that helps me manage these redbanded stink bugs is knowing that the population is always going to build," explained Jones. "It will never stay the same. It will never level off."

Even the hardened beans of an R7 soybean plant are no match for the redbanded stink bug's impressive mouthparts. Redbanded stinkbugs cause high levels of mechanical injury by creating a physically larger hole in the bean.

The wounds also leave seeds open to secondary diseases and weather damage. Elevator dockage and rejections for stink bug damage were a common problem last year in the Midsouth, and likely will be again, the entomologists noted.

LSU researchers have documented up to 10 bushels of yield loss even in fields sprayed as late as R6.5, mainly from seed weight loss, Davis said. Group IV beans seem to be more sensitive to late-season damage than Group V, he added.

As a result, Davis encourages growers to control the pest as late in the season as possible. Doing so not only saves yield, but it protects neighboring late-planted soybean fields and knocks down populations going into the winter.

Last year's extremely mild winter allowed the redbanded stink bugs to overwinter as far north as Interstate 20 in northern Louisiana, which gave the pest a good head start for 2017.

Redbanded stink bugs do most of their egg-laying and bean-feeding in the lower two-thirds of the canopy, Davis said.

That means scouting with classic sweep nets likely misses a large swath of a population, he said. With that in mind, Louisiana researchers have pegged the "action threshold" at four stink bugs per 25 sweeps of a net.

However, even "sub-threshold" levels can be dangerous if they feed long enough. In 2016, Davis documented a 15-bushel yield loss in a field where just two stink bugs were found per 25 sweeps for three weeks in a row.

"If in the long term, you see populations continue to be there, you need to put out an application because those sub-threshold levels can still cause seed loss and damage," Davis said.

Because the bugs huddle in the lower canopy, insecticide applications often miss the bulk of the population, Davis warned. He urged applicators to slow sprayers down and increase insecticide rates in order to get better control.

Populations with resistance to acephate insecticides have emerged in Louisiana, and they appear to be highly localized but very persistent, Davis added. For data on which insecticides control the pest and at what rates, see page 48 of this Louisiana State University guide: http://bit.ly/….

Guidance on scouting for redbanded stink bugs, which can look very similar to red-shouldered stink bugs, is in his University of Arkansas guide: http://bit.ly/….

The biggest weapon against the redbanded stink bug is out of farmer's control, Davis noted.

"Hope for cold weather," he said. "The lethal temperature is 23 degrees."

Controlling crimson clover, which Davis called "Red Bull for stink bugs," is a close second. The pests thrive and reproduce splendidly in clover fields, which are popular for their cover crop benefits and erosion control along highways and other construction sites, he said.

Some soybean varieties are proving more tolerant to the pest. You can see some of them in this LSU guide, on page 46: http://bit.ly/…. 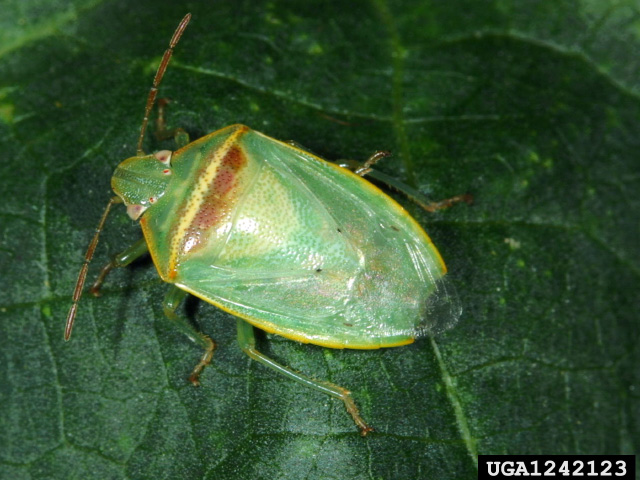