ROCKVILLE, Md. (DTN) -- Great Plains wheat growers got a painful refresher course on the importance of the Golden Rule this year -- and neighborly responsibility.

Kent Eddy was forced to abandon nearly 20% of his wheat acres near Syracuse, Kansas, this year. The fields left standing averaged around 20 bushels per acre -- about 55% of his usual yield.

The culprit was wheat streak mosaic virus, a disease transmitted by a tiny pest called the wheat curl mite. The mite survived on volunteer wheat plants last summer and passed the disease on to a record number of wheat acres in Kansas, Oklahoma, and Nebraska this year.

Eddy didn't leave any volunteer wheat plants standing in 2016. But some neighbors did.

A DISEASE WITH NO CURE

Growers can't treat wheat streak mosaic once it arrives in their fields. The disease yellows wheat plants and can decimate yield.

In parts of southwestern and west-central Kansas, where the disease was at its fiercest this year, it wiped out entire fields, Lollato said. The ones left standing had low yields and low test weights, rendering them almost useless, he added.

But farmers aren't without weapons. Their best target is the wheat curl mite, which infests wheat plants and infects them with the virus. Unable to fly, the mite floats from field to field with help from the wind, which is always in good supply in the Great Plains.

"What is important from a producer perspective is the mite needs a living host to feed," Lollato explained. "It can't survive if it doesn't have a living host."

The good news is it only takes two weeks to starve a wheat curl mite. Producers should aim to kill all standing volunteer wheat at least a full two weeks before planting their new wheat crop in the fall, Lollato said.

That doesn't mean growers should wait until fall to control volunteers, however. The longer the mite populations survive in the summer, the more numerous and widespread they will become.

They can also survive on other grassy hosts such as barnyardgrass and green foxtail, though not nearly as well as they do on wheat.

Don't rely on miticides to control them, Lollato warned. The wheat curl mite gets its name from the way it causes a wheat plant's leaves to curl around it as it feeds, which forms a protective barrier from contact chemicals.

Last summer, wet conditions allowed volunteers to spring up immediately after harvest and throughout the summer. Eddy had to do two passes of tillage and herbicides to kill them all. This year, a little tillage controlled the early flush after harvest and he is waiting and watching for the next flush of volunteers.

There should be plenty.

"Wheat streak mosaic and the [April] blizzard we had caused a lot of wheat to break over, and it was hard to get all of those heads at harvest," Eddy said. "So there are some mature seeds out there that will sprout after the rains we just had. There's certainly potential for a lot of volunteers."

Hail storms in western Kansas in June also likely left a lot of viable seeds on the ground, ready to sprout, Lollato added.

Producers who leave volunteers to grow aren't always doing it out of neglect, Lollato noted. Many of them are livestock producers who use the later flushes of wheat to feed cattle.

"Many producers see volunteer wheat as cheap source of feed for grazing," he said. "But one man's savings is another man's expenses there."

Some of Eddy's abandoned acres were next to a field of volunteer wheat left for pasture. "It doesn't take a very big patch of volunteers to infect a fairly large area, when weather and conditions were just right for the spread of mosaic virus," he said.

Cattle feeding does not destroy enough of a wheat plant to prevent the mites from surviving and spreading. Lollato urges producers to consider planting other, higher-quality forages for fall grazing, such as triticale.

Farmers have another line of defense against wheat streak mosaic: varietal resistance.

Some wheat varieties show resistance to the virus itself, as long as nighttime and daytime temperatures in the fall and early spring average below 65 degrees. In hotter years such as last year, that resistance does break down.

More heat tolerant wheat streak mosaic-resistant varieties are in the works, but they are several years away from the field.

Other hard red winter wheat varieties show resistance to the wheat curl mite. However, under heavy pressure, even these varieties can become infected. See WSM-resistant and mite-resistant varieties available now in this Kansas State article: http://bit.ly/….

However, the first and most urgent line of defense should still be controlling volunteers, if not for you, then for your neighbor, Lollato said.

"It's important to look at wheat streak mosaic prevention as a community effort," he said.

Eddy isn't one to hold a grudge. The amiable Kansas farmer is focusing instead on helping neighbors understand how their management decisions affect others.

"There's been a little coffee shop talk about how to get your neighbor to control his volunteers," he said. "You still wave to them and encourage them as much as you can."

For more information on how easily mites spread in the summer, see this Kansas State article: http://bit.ly/…. 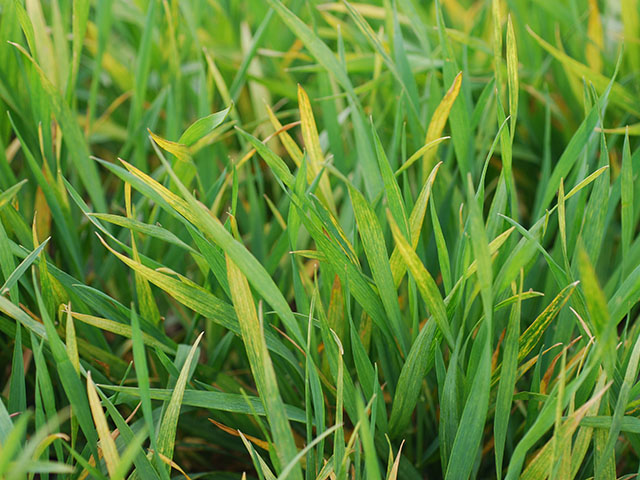