ROCKVILLE, Md. (DTN) -- It was a tale of two wheat crops today, as the Hard Spring Wheat and Durum Tour traveled east to west through southern and central North Dakota.

Crop scouts on the eastern leg recorded an average crop, but scouts venturing into western and southwestern regions saw fields devastated by drought.

On the annual tour, organized by the Wheat Quality Council, scouts spend three days fanning out across North Dakota, northern South Dakota and western Minnesota, where they calculate spring wheat and durum yields.

According to the U.S. Drought Monitor, much of the western halves of North Dakota and South Dakota are in extreme to exceptional drought conditions -- and wheat has been a major casualty.

Jim Peterson, marketing director for the North Dakota Wheat Commission, sampled wheat in the southwestern counties of North Dakota -- some of the state's driest areas. "As you get south and west of Bismarck, in some areas, 40% or 50% of the wheat fields have already been rolled up into hay bales," he estimated.

"I didn't expect to see so much wheat baled up in the west; there is field after field, full quarter sections baled," he said. "It's terrible out there. Heading from Golden Valley to Beulah on Highway 200, everything was baled. There are some fields standing south of Hazen, but I'm not sure if they will make it. It's been very hard for us to find fields to count. It's astounding."

"They've caught some late rains, so I think that's helped from a fire perspective, but it's certainly too little, too late for the wheat crop," he said.

"Most fields look pretty clean, some signs of smut," said Ernst, who works for Chiodo Commodities. "No signs of severe drought, but there is some cracking in the soil. We didn't start to see more drought condition fields until we got deeper in Logan [County]."

Wheat Quality Council executive vice president and tour organizer Dave Green took the southernmost route of the day. His car dipped into South Dakota, where they had to hunt for wheat fields among the corn, soybean and pasture, he told DTN.

Like many scouts who sampled fields east of Bismarck, Green saw an average crop. By mid-day, the route's wheat stops were averaging in the mid-40s, he said. However, as his car ventured west, wheat grew thinner and shorter, with yields falling into the 20s, Green noted on Twitter.

"The crop this year is a mixed bag, which is what I expected, and certainly not as good as last year or the year before," he told DTN. "Our average on the first day for the green route is in the high 30s; my guess is that the fields we did see today will be ready for harvest in one to four weeks."

There were a smattering of reports of disease and insects, primarily in the eastern half of the South Dakota, where moisture was available. On Twitter, some scouts reported seeing small amounts of powdery mildew, smut, ergot, stripe rust, grasshoppers and wheat stem maggot.

If there's one silver lining to a droughty wheat crop, it's usually protein.

Peterson's car stopped at an elevator in New Salem, North Dakota, where early harvest loads were running around 15% protein. That's good news for wheat end users who are facing two consecutive seasons of low-protein winter wheat in the Southern Plains.

Surprisingly, test weights and grain quality were holding up as well, Peterson reported. "In their early samples, test weights are holding 59 to 60 pounds, so that's a positive early quality sign," he said.

Down in Onida, South Dakota, Oahe Grain Corporation manager Tim Luken has found the same thing. "Of the harvested acres we're seeing on spring wheat, the quality so far is great," he told DTN last week. "We're seeing 60 to 63 pounds test weight and protein ranging from 16.5% to 17.8%."

"Harvesting 16.5% to 17% protein is not great news," she explained. "While that high of protein is good for blending at the elevator or on farm, it doesn't work well for mills making bread flour which is usually 12% to 15% protein max."

Tomorrow scouts venture into central, north-central and northwestern North Dakota. "The story we're hearing is it's very dry and there's a lot of abandonment," Green said.

Wednesday's routes start in Bismarck and fan out through southwestern, northwestern, central and north-central parts of the state before ending in Devil's Lake, North Dakota. 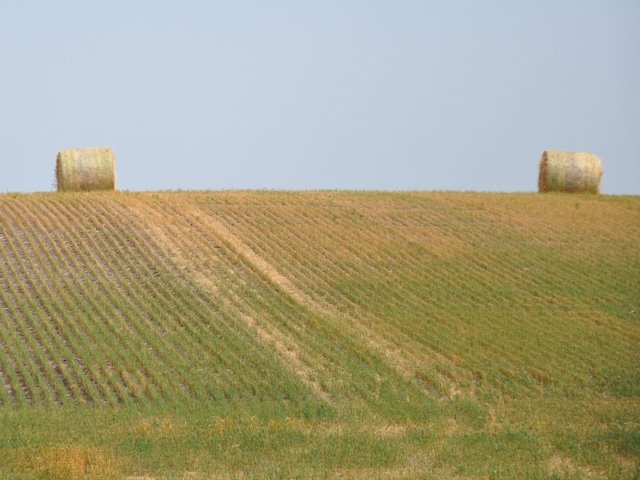