ROCKVILLE (DTN) -- The sugarcane aphid is quickly becoming one of sorghum's most consistent pests.

Just as it has every summer since 2013, the pest is creeping steadily north up through Oklahoma, with Kansas in its sights.

The good news is that farmers and Mother Nature are getting a handle on the aphid, which created enormous damage to sorghum fields in its first few years of discovering the crop. Some growers even abandoned the crop in frustration, a trend that could reverse soon, said Robert Bowling, an Extension entomologist with Texas A&M.

"We're really starting to see a little bit of a balance in the system, as natural enemies start to catch up with the insect," Bowling said. "The other important thing to note is we've got some really decent sorghum hybrids that are highly tolerant to the aphid."

Growers also have two effective insecticides in hand and a growing body of research on how to manage and treat the pest.

"I don't think we'll see the same issue with the aphid as we did in the 2013-14 season," Bowling said. "There will be outbreak years but not the same issues."

Like many agricultural pests, the sugarcane aphid arrived early this year. Colonies began to build in the Rio Grande Valley in Texas in late February.

By the end of March, the aphids were spreading throughout the Gulf Coast region of Texas, Bowling said.

"But they really never progressed the way we thought they might," he said. "Most farmers experienced colonies building along the field edges, so we saw some farmers spraying just the field edges and a few spraying entire fields."

"The timing is probably slightly earlier, but the build-up we've seen in the past is not there yet," Royer said. "Definitely not treatable populations yet."

Royer is optimistic about the sugarcane aphid season in Oklahoma this year.

"I'm not expecting to see what we saw in 2014 and 2015 because producers have switched over to planting earlier and using varieties we know are resistant to the aphid," he said.

Bowling also sang the praises of resistant sorghum varieties. Between university and industry, scientists have identified more than a dozen hybrids as good options for aphid-plagued growers. See them here: http://bit.ly/….

Natural insect predators such as lady bugs and parasitic wasp species have also discovered the annual aphid smorgasbord and are hard at work in fields this year, Bowling said.

That's a big part of the reason not to panic and spray at the first sight of aphids in your sorghum, Royer cautioned. He recommends growers look for 20% to 30% of plants to be infested with 50 aphids each before running a sprayer.

Growers can use two insecticides to treat aphid infestations. Bayer's Sivanto insecticide is labeled for the pest, and in most sorghum-producing states, growers have received access to Dow AgroScience's Transform WG insecticide, through Section 18 emergency use exemptions. (The insecticide's newly issued EPA label does not include sorghum, although Dow has vowed to fight that).

Check this website to see if your state is among those with an emergency use exemption for Transform: http://transformmysorghum.com/….

Bowling said southern Texas growers had some problems getting insecticides to penetrate the canopy effectively this year, which is a problem as the aphids often start on lower leaves.

"We're recommending that if growers have narrow row spacing or a hybrid that produced a thick canopy, they up their volume to no less than 15 gallons per acre," for both insecticide options, he said. "We've also seen better penetration with hollow-cone nozzles over air induction nozzles."

Lowering the boom as low as possible and slowing sprayer ground speed will also improve insecticide coverage, he added. 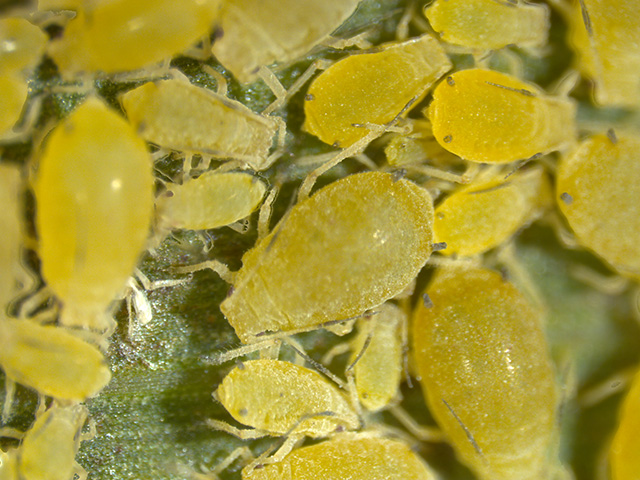