DECATUR, Ill. (DTN) -- Don't wait for the last flush of weeds if you plan to use new dicamba herbicides to clean up fields planted to the Xtend herbicide-tolerant system. XtendiMax, FeXapan and Engenia labels recommend herbicide applications be made when weeds are 4 inches or less in height.

That's a tough order when weather conditions close the window on spraying, said University of Illinois weed scientist Aaron Hager. "Keep in mind that a pop can is about 4.5 inches tall. Weeds species such as waterhemp and Palmer amaranth can easily grow 1 to 2 inches a day. These new labels narrow the spray window for post-emergence applications over what many growers remember in the Roundup Ready days."

Labels for the new dicamba formulations also stipulate post applications must be made by the beginning bloom or R-1 soybean stage. "This is not a rescue product that you can come in late and catch weed escapes," Hager said. "The days of spraying weeds that hover above the canopy are over. Farmers might want to consider adding an approved soil-residual herbicide with the first post application to help control later flushes."

Monsanto and DuPont labels specifically state they will not warrant product performance of applications made when weeds exceed 4 inches in height.

Hager said visual proof that pre-emerge residuals products have value showed this spring. "All you have to do is look at those field edges and sprayer skips to see what you might have had without those early applications," he said. "With wet weather holding sprayers out of the field, those residuals have been very helpful."

Early weed competition is typically more costly in corn than soybeans, Hager added. However, all eyes are on the new dicamba technologies in soybeans and cotton as spray applicators are faced with a long list of procedures and actions aimed at protecting sensitive crops and areas from off-target movement.

Hager said rain delays and replant situations have moved potential post sprays further back on the calendar in the Midwest. Although the new dicamba formulations are designed to reduce volatility, the potential still exists. "Physical drift has nothing to do with volatility. As we move later in the season, there are also more sensitive crops on the landscape," he said. Hager also advises applicators to be aware of temperature inversions and avoid spraying when inversions exist.

Growers tempted to spray bigger weeds are also inviting a fate that is already showing its hand. Weed resistance to the auxin class of herbicides, of which dicamba and 2,4-D fall into, has already begun to show up. Hager and fellow scientists have identified a waterhemp population in Illinois that survived 0.75 pound of dicamba in 2016 field trials.

"It's not a matter of if, it's a matter of when resistance happens," he said. "Applicators need to use full herbicide rates and get these weeds early to preserve these new technologies as long as possible. Integrating other weed management tactics can help further reduce the evolution of herbicide resistance." Unlike the herbicide labels of the past, XtendiMax, FeXapan and Engenia have non-negotiable use rates.

EPA did grant the new dicamba formulations a "living label" that has allowed additional tank mix partners and nozzles. However, wind tunnel testing showed the addition of some active ingredients increases the number of driftable particles, increasing the risk of physical spray drift. As a result, specific drift reduction agents and nozzles are required with some dicamba tank mix combinations. 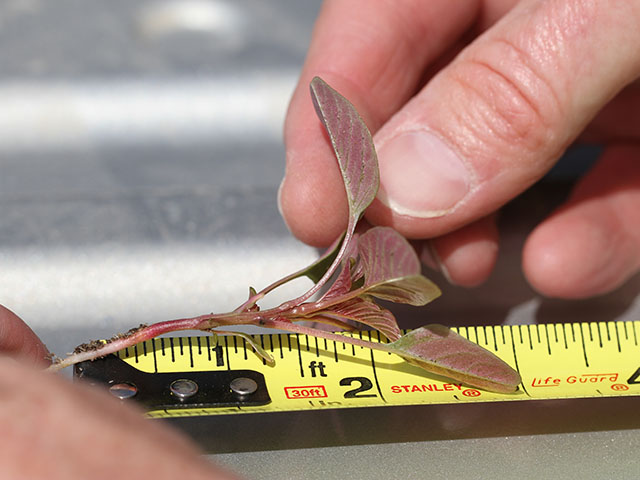