OMAHA (DTN) -- As has been the case in recent weeks, retail fertilizer prices are still on the rise but at a fairly small clip the second week of March 2017, according to fertilizer retailers surveyed by DTN. This marks the eighth consecutive week prices have moved higher.

DTN recently ran a poll question asking, "Retail fertilizer prices have been on a steady increase since the beginning of 2017. Have you pre-purchased any of your fertilizer needs?" The answers included choice 1, "Yes, I did several months ago;" choice 2, "Yes, I have in recent weeks;" choice 3, "No, I have not but I will soon;" and choice 4, "No, I don't ever lock in fertilizer."

With 431 total responses, the majority, 71%, responded with choice 1, "Yes, I did several months ago." Eleven percent said, "Yes, I have in recent weeks," while 9% responded, "No, I have not but I will soon." Eight percent went with choice 4, "No, I don't ever lock in fertilizer."

While it is not surprising the majority of polltakers responded with one of the first three choices, what may be a little surprising is the high percentage of those selections. Those top three answers added together come to 92% of polltakers who said they have already or will soon lock in at least some of their fertilizer needs.

Breaking down the data by state finds all of the nine states with double-digit responses fell in line with the overall numbers of the poll. These states were Iowa, Illinois, Indiana, Minnesota, Missouri, North Dakota, Nebraska, Ohio and South Dakota.

The state with the lowest number of choice 1 answers was South Dakota, with 65% taking this selection. Eighteen percent selected choice 3, 12% picked choice 2, and 5% picked choice 4.

Retail fertilizers are lower compared to a year earlier. Half of the eight major fertilizer are double digits lower. 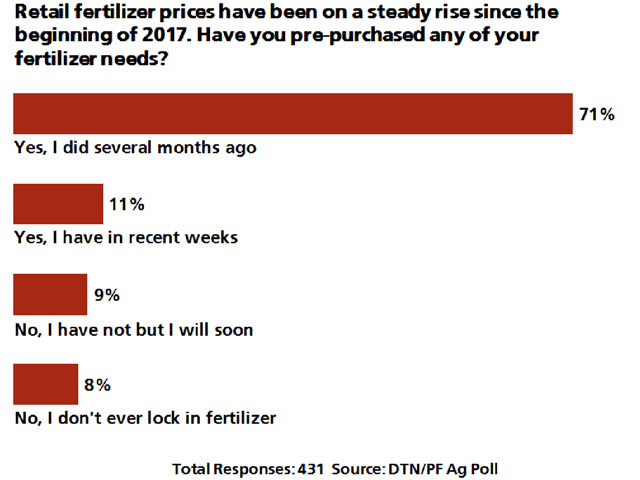